Secret Trail beer is something to shout about 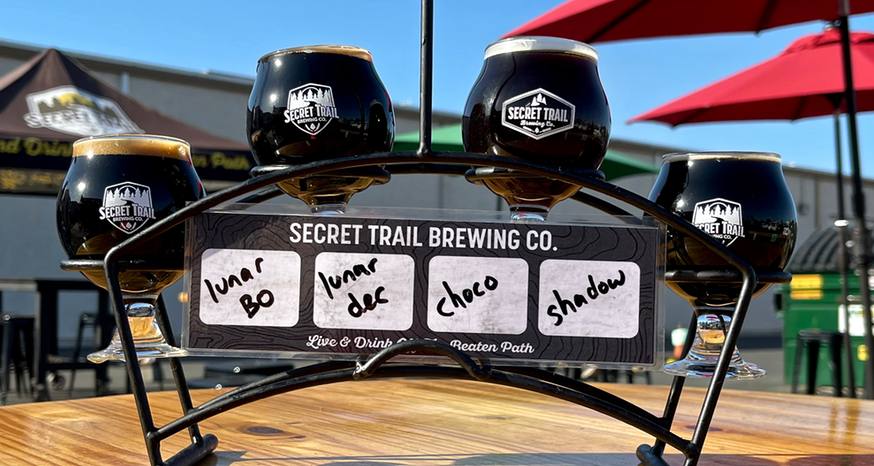 Secret Trail Brewing Co. may be off the beaten path in Chico, but their product should be no secret to those who like craft beers.

Charlie Barrett had been making beer at home long before he and wife Michelle Barrett opened their brewery in November 2017. Now he has people working for him to make the beer on site.

Through a glass wall it was great to see all the stainless steel gadgetry to make the beers in the room adjacent to the tap room. Something about beer made on site makes it taste so much fresher.

On a recent Friday night, the place was hopping. While masks are required when inside the tap room, the patio and parking lot area with the food truck are mask-free zones to those eating and drinking. The former has seating more close together, the latter has tables socially distanced.

We opted for a flight ($10) of all dark beers. The four were chosen based on the worker’s recommendation. 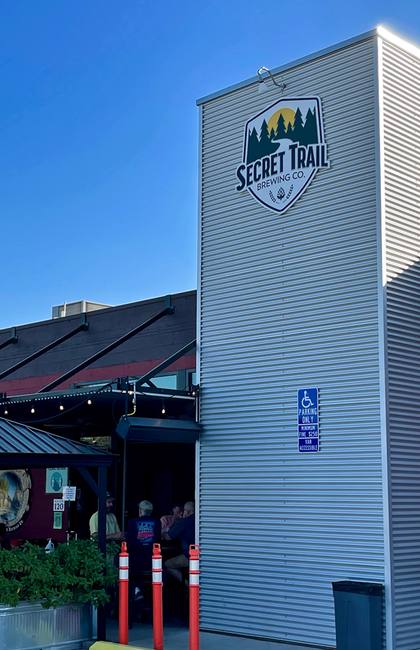 Secret Trail has been in operation since fall 2017. (Image: Kathryn Reed)

About a dozen handles were available that night, so there is bound to be something on Secret Trail’s beer menu to appeal to most people.

Before imbibing we thought we would use the sampler as a guide to ordering a pint of our own. However, we were pretty full after the four tasters and tacos so we passed on drinking more. At least now we know what we might order next time, because there will be a next time.

My favorite of the four was Lunar Decadence. Sue’s fav was the Choconut. Neither of us was impressed with Shadow. The fourth in our sampler was the Lunar Blackout NITRO.

This is what Secret Trail says about the Lunar Decadence: “ABV 11.0% IBU 50 This is just the second release of this very special beer. The first was so popular we did it again, but this time we ramped up the flavors even more. We took our Bourbon Barrel Aged Lunar Blackout and added locally-roasted coffee from Road Roaster Coffee Company, toasted coconut from Sri Lanka, and vanilla beans from Madagascar. The rich and decadent flavors from around the world come over your palate in waves of delight as you luxuriate yourself in all of their wonders.”

And the specs on the Choconut are: “ABV 7.8% IBU 31 This is a rich and substantial dark lager loaded with premium cacao and heaps of coconut. The result is a decadent chocolate-coconut bomb. On the palate it is silky smooth and full bodied without becoming exhausting and lends itself easily to enjoyment.”

For those looking for a can of beer, Secret Trail is available at a number of restaurants and stores in Chico as well as in Oroville, Orland, Paradise and Magalia. Those wanting a larger quantity might want to consider taking home a growler.

Food trucks are on site every day, with Gnarly Deli there Saturday-Tuesday, Indulgence Pizza on Wednesdays, Black Kettle on Thursdays, and Chicobi’s on Fridays.

I was super excited to see two veggie choices from Chicobi’s. I opted for the Veggie Jamaican Tacos ($12), which were filled with Jamaican jerk spiced asparagus, coconut infused slaw, tropical salsa, queso and lime divided on three corn tortillas. I could see following this food truck around the area it was so good.

Sue chowed down on Jamaican Chicken Tacos ($13)—same ingredients except chicken instead of asparagus.

One of the workers said the most popular item that night was the tropical salsa with chips ($6). 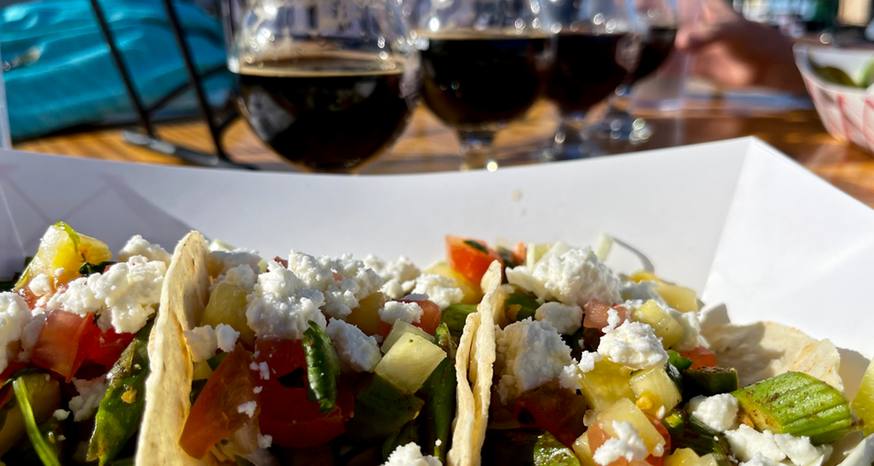 Tacos and beer are a fabulous combination. (Image: Kathryn Reed)