It was immediate. I knew this wasn’t the same Diet Coke I was used to drinking. It was more than the packaging, with it being called Coca-Cola Light in Mexico.

Sweeter, less carbonated. That’s what I think of Diet Coke in Mexico compared to the United States.

The difference is that in Mexico the recipe uses cane sugar instead of high-fructose corn syrup. The carbonation factor I can’t figure out. I’ve had Coca-Cola Light out of aluminum cans and plastic bottles here. Both seem less fizzy than what I get north of the border.

Some in the U.S. prefer the Mexico blend, so now it is imported in some locales. Look for hecho en México to know that it’s made in Mexico.

Mexicans drink more soda than any other country. Coke, though, dominates the market. On average, Mexicans drink 700 cups of Coke a year, which is almost double what people in the United States drink. 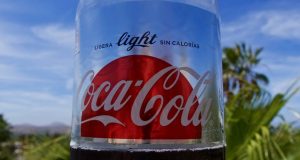 Obesity and diabetes became a huge concern, especially after Mexico joined NAFTA in 1994. The price on sugary drinks like Coke and processed foods dropped. In some locales in Mexico it was cheaper to buy a Coke than potable water. The number of Mexicans diagnosed with diabetes doubled between 2000 and 2007.

Vicente Fox, who was president of Mexico from 2000-06, had too close of a relationship with the mega carbonated drink producer to do much. He was once president of Coca-Cola Mexico.

It was President Enrique Peña Nieto who in 2013 proposed a 10 percent soda tax. It took effect the following year.

A study by BMJ showed a reduction in soda consumption. However, actual reduction in calories has not been significant enough to have serious impacts on reducing diabetes and obesity. Others are calling for education to be stepped up so consumers understand the impacts of their dietary choices.