Time for chefs to step it up to satiate vegetarians

Even in 2019, being a vegetarian can be an issue when eating out. I blame it on the chef.

Most kitchens are full of vegetables. Most side dishes are a veggie. It’s not hard to turn a side dish into a main dish. Why not have a non-meat entrée or two on the menu? If that is too much to ask, why can’t the chef be creative? 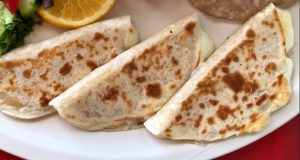 Quesadillas can be a restaurant’s answer to feeding a vegetarian. (Image: Kathryn Reed)

No longer is vegetarianism an oddity. It is safe to call it mainstream even if a minority subscribe to this way of eating.

According to a 2018 Gallup Poll, 5 percent of the U.S. population claimed to be a vegetarian. This is about the same percentage that said so in 2012. Research firm GlobalData found that in 2017 6 percent of people in the United States identified as vegan. This compares to 2014 when 1 percent did.

Even if people aren’t eating a totally plant-based diet or one where no animal was killed, people are embracing “meatless Mondays” and the like. Look at all the options in U.S. grocery stores for prepared veggie meals. People are making a conscious effort to eat less meat.

That is why it always surprises me when there isn’t at least a vegetarian option on a menu.

So often the go-to solution for restaurants in the U.S. is to offer a veggie burger. Fine. But when it’s just some frozen, ordinary burger this is like having iceberg lettuce for a salad. Boring.

I’ve walked out of a number of restaurants in the South Lake Tahoe area because there was nothing on the menu I would eat. This always shocked me, especially considering how close Tahoe is to San Francisco, and that Northern California is where most tourists come from.

In Baja California Sur I’m finding quesadillas to be my solution when the menu is filled with meat, usually fish.

Restaurants like Santos Pecados in Todos Santos are amenable to catering to a vegetarian. The chef turned the burrito on the menu into a burrito with verduras. No meat, no fish. It was awesome, with such wonderful flavor. The waiter even came out to make sure I would eat cheese. This shows the chef knew to figure out if I was vegetarian or vegan. Then there is Hierbabuena in Pescadero. I could eat at this farm-to-fork restaurant every night. I’ve never been disappointed. On the more casual side, Santo Chilote in Todos Santos, which is known for its fish tacos, offers a deep fried avocado. I call that innovative.

While I don’t mind a veggie burger or quesadilla, I’d rather spend my limited dining dollars on something more interesting, not something I could easily have had if I’d stayed at home. Come on chefs, show your creativity with those vegetables.