What passes for orange juice in Mexico is more like Tang

Even though the United States and Mexico are two of the largest citrus producing countries, what passes for commercial orange juice is strikingly different.

True, nothing beats fresh squeezed, but I’m too lazy to make it. There was a time when I drank OJ every day. Now I know better. Still, sometimes I want juice out of a container, even if it is mostly sugar water and not good for me. Even the not-from-concentrate orange juice falls into the unhealthy category. 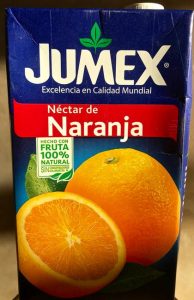 Jumex is the main brand of juice in stores in Todos Santos. This Mexican company was founded in 1961. It has been importing juices to the United States since 1982.

What surprised me more than it coming in a box is that it was not refrigerated. Jumex mostly produces what it calls nectars. Nectar is fruit juice and pureed fruit. It might have pulp. The orange nectar from Jumex is pale in comparison to most U.S. orange juice brands, more like Tang. The taste is more Tang-like than orange juice, too.

For me, it acts as a thirst quencher – something to drink besides my usual water or Coke Light. Plus, it works fine for smoothies.

I can get U.S. orange juice in Mexico, but I have to travel for it. Costco in Cabo San Lucas sells Florida’s Natural orange juice (2.63 liters) for about $6. This is a bit spendy since it is imported. When I treated myself to it I discovered it wasn’t that special. I’ll stick with the Jumex orange nectar (1.89 liters) for about $2 when I have a craving.