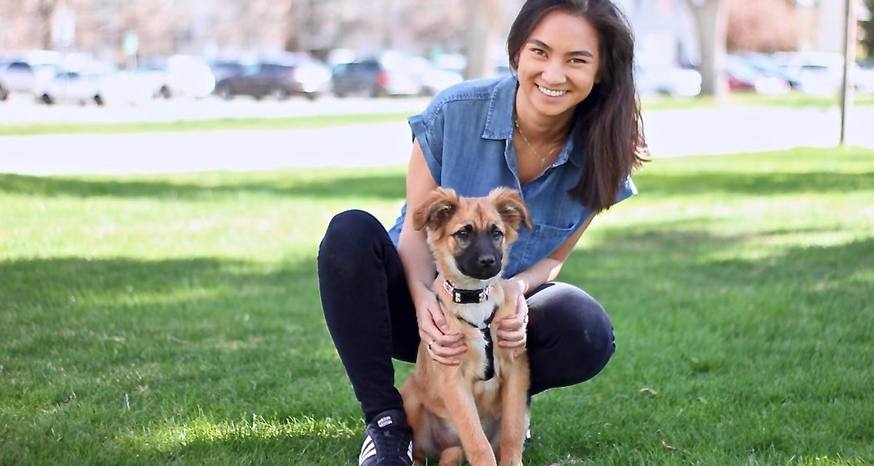 It’s not just humans who want to migrate to the United States. Dogs – many just puppies – are making their way north, too.

Mexico is known for having a large street dog population. They breed. It’s a cycle that some people are trying to break. Putting on free spay/neuter clinics is a start. It’s necessary to educate the local population about the options for caring for their pet and explaining that preventing it from breeding does not emasculate the animal or owner.

Initially, Fine took dogs, mostly puppies, to a shelter in San Jose del Cabo that would tend to their veterinary needs and arrange adoptions. Things changed at the shelter so she started arranging the adoptions herself, with dogs now going to the U.S. and Canada. The U.S. mandates puppies be 4-months-old before being allowed in, while Canada will take them at 2 months. About 19 months ago Fine started working with Dog Prana, a shelter between Todos Santos and Cabo San Lucas, that was founded by Mariana Perea Blazquez. That shelter can house about a dozen dogs. 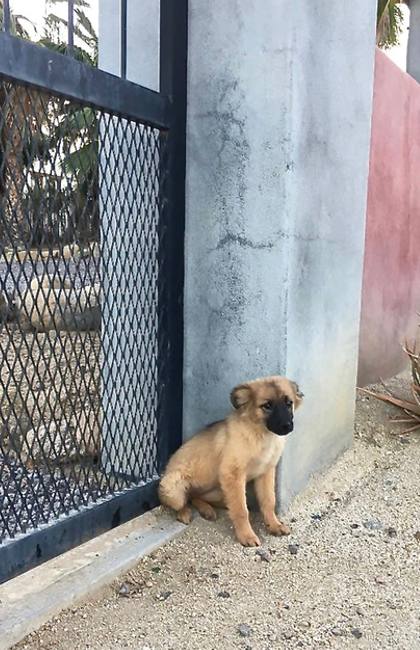 Mango waits patiently outside the gate at the Todos Santos house, knowing there are nice women inside who will make her life better. (Image: Jacqueline Wong)

“It is not easy to find good homes here. Unfortunately, many of the local people either let their dogs roam loose on the street or tie them up. The foreigners who live here have dogs of their own. Often strays show up in their yard like Pelusa did. So, we probably send about 95 percent of our rescues north,” Fine said.

Pelusa is now known as Mango and is living in Colorado. She was adopted by my niece, Jacqueline. It wasn’t planned. Mango found her and never left. All of this happened under my dog AJ’s watch while I was in the United States in March. My sister, Jann, who owns the Todos Santos house, and her youngest daughter were here for a week.

One evening they were going to the beach with AJ (and margaritas). A fluffy puppy was on the other side of the gate. Jacqueline was able to shoo her away; and there was no sign of her after they returned from watching the sunset.

“The next morning, I was still in bed and my mom was up and outside in the yard. She called to me, ‘J, come out here!’ As I walked toward the front door, I said, ‘Why’ and she said, ‘Your puppy is out here,” Jacqueline said. “She was curled up in between the water tanks, and she was scared. My mom got her out of the tight space, picked her up, and put her in my arms.”

And so it began.

It didn’t matter what Jacqueline tried to get the puppy to leave. It came back. It found holes in the fence. The fence was reinforced. The puppy was persistent. 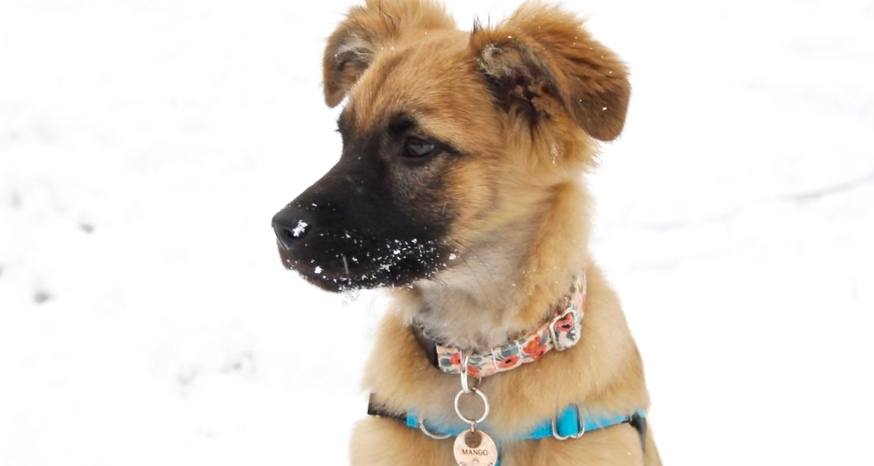 Mango has left the beaches of Baja for the snow of Colorado. (Image: Jacqueline Wong)

My family finally gave it water. She stayed by the door when “her people” were inside. She wanted to play with AJ, but AJ at 16 wasn’t in the mood for puppy antics and let her know it. Then they bought food for her since AJ is on a special diet and puppies should have their own formula. The puppy slept upstairs – outside – not far from my dog and sister.

None of their actions resembled those of people who wanted the puppy to go away. Petting, holding, feeding, walking an animal is only going to ingratiate it to those who show this kind of love.

“She slept outside upstairs again. In the morning, my mom said, ‘It was so cold last night ….’ I responded, ‘Not really.’ She said, ‘This morning, I wrapped her up in a towel and brought her inside, and she just laid on my belly.’ My mom does not let dogs in the bed, ever,” Jacqueline said. “I had posted a video of the pup on my Instagram story, in which I call to her and she trots over to me. My mom said that she watched my story while the pup was laying on her and she got all excited when she heard my voice.

“We were leaving that day, so the woman from the dog rescue came to pick her up around noon. She remarked about how cute she was and how fluffy her coat was, saying that a dog like that doesn’t belong in Mexico. My mom and I exchanged looks. She told us that they usually transport their dogs to Seattle, Portland, or Vancouver to be adopted from partner rescue organizations. My mom and I exchanged another look. We told her that we might be in touch.” 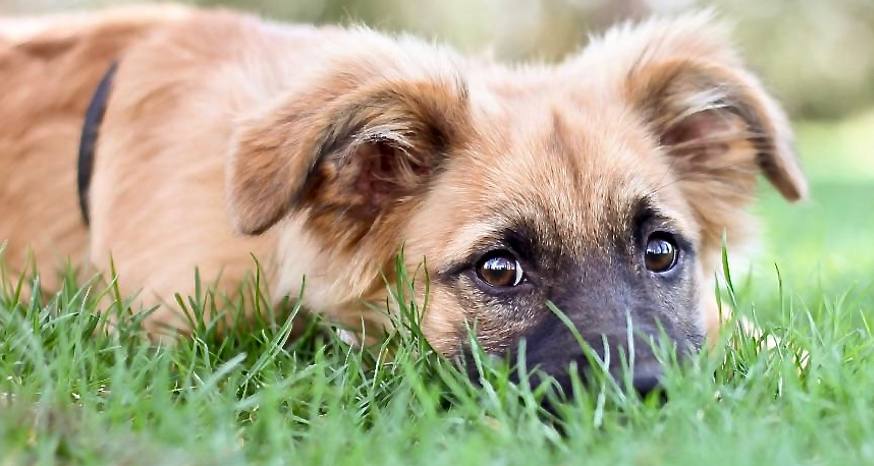 “When we got to Denver, I picked her up from a small room next to the baggage claim. I carried the crate outside and finally got to take her out. It had been a month since I’d seen her. She was less fluffy, but still so cute,” Jacqueline said. “We cuddled on the sidewalk of the DIA passenger pickup and I told her she was mine forever. I put on her leash and we walked to my car. She peed the longest pee I’d ever seen, so I know she was holding it in her crate that whole time. We ran around in the parking lot a little before getting in the car to make the drive to Fort Collins.”

Mango’s first night in her forever home included meeting a four-legged buddy and having all these people to pet her. It wasn’t long until she experienced snow, met her three dog cousins in Denver, started to learn to play fetch and swim in the local reservoir.

“She’s going to be a great Colorado adventure dog, and I’m so grateful for the holes in the Todos Santos fence and for all the people who helped get Mango to me,” Jacqueline said.

As for Fine, she is backing off a bit from the dog rescue business, leaving that more to Blazquez at Dog Prana. Fine wants to focus more on spay/neuter issues as she works with Pet Los Cabos to bring vets to the area to do the clinics.

“We do them in the local neighborhoods and use Mexican volunteers to help us with outreach. Our first clinic was in January and we sterilized 137 dogs and cats in one day. In March we did 142,” Fine said. “Our biggest challenge is getting financial support. We don’t have the time or volunteers necessary to do big fundraising events.”

A Todos Santos dog fosterer rescued a pregnant dog which in June gave birth to eight puppies. The veterinary care and food for all nine was estimated to be at least $600. That’s why there is always a need for donations; there is always another dog to care for, another Pelusa/Mango who needs a home.