Baja shutting down because of coronavirus

Essential workers vs. it’s essential to work. How do you convince people not to work when there is no social safety net, when there is no savings account? Can construction crews be 6 feet apart and not share tools? Are agricultural workers being given instructions about how to distance themselves? Will gringos pay their workers even if they are told to stay home?

These are questions being asked everywhere as the coronavirus seeps into each corner of the world. Not every country is going to be able to come up with a $2.2 trillion plan to help its citizens. Mexico, like many others, is a Third World country without the resources of the United States.

The Organisation for Economic Co-operation and Development says per capita Mexico has half as many hospital beds as the United States, and one-fourth the number of nurses. While Mexico was ground zero for the 2009 swine flu pandemic, it is not on the forefront of testing for the coronavirus.

As of March 29, Baja had 23 confirmed coronavirus cases. Baja is divided into two states. As of March 27, there were eight confirmed cases in Baja Sur – all in the Los Cabos area. They were either foreigners or someone who was in contact with a foreigner. This makes sense because cruise ships and planeloads of tourists kept coming even after other parts of the world were shutting down. As of March 30, all of Mexico had 993 cases, with opera legend Placido Domingo one of them. He is hospitalized in Acapulco. 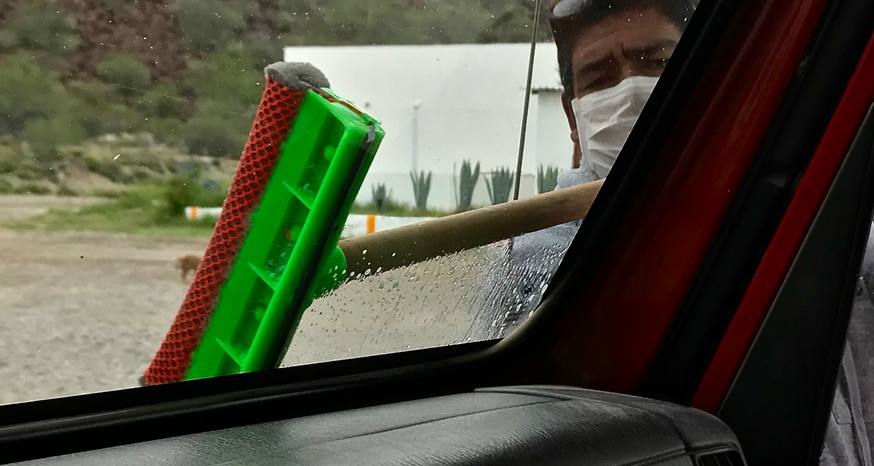 A gas station worker in Mexico wears gloves and a mask while working near San Ignacio in March. (Image: Kathryn Reed)

Baja Sur Gov. Carlos Mendoza Davis on March 27 addressed his constituents, saying, “The situation is already difficult and the days to come will be more difficult, which is why government and society must work together to maintain jobs and lessen the economic repercussions. It is important for everyone to remain home as much as possible, and to follow the recommendations of the sanitary authorities.”

It wasn’t until last week that the Mexican federal government told people to say home. Schools are closed. Beaches are off limits throughout Baja Sur. Still, some people are doing what they want like continuing to surf. The military is patrolling, having been to Cerritos, the popular swimming/surfing beach near Todos Santos. For these limited resources to be wasted on getting gringos to abide by laws in a country they are visitors in is sad and wasteful. Since I drove through La Paz on March 23 checkpoints have been set up for anyone entering the city. Randomly people are having their temperature checked.

My last full day in Todos Santos (March 22) a car started going around neighbors telling people in English and Spanish to shelter in place. This type of broadcast is a normal way for information to be disseminated in this town. Announcements in English, though, are extremely rare. ACTS (Asociación de Colonos de Todos Santos) is the nonprofit helping fund the vehicle to make the announcements. It is also working to help provide for the local community.

“We are asking our members and supporters to consider a monetary donation to supply the food banks with essentials such as beans, rice, milk, eggs, etc. We want to make sure that anyone in need at least has enough to eat. While we still have money left to contribute to the food bank as well, we expect that the effects of this pandemic could go on for weeks if not months, and our current funds are not enough,” an email from ACTS dated March 29 said. Donations may be made online; note the donation is for the food bank.

Saint Judes Medical Center in Todos Santos is a private urgent care that gringos can afford to go to, but few Mexicans. They sent out a notice stating, “There will be a 200-peso charge per consultation until further notice, and until the coronavirus pandemic emergency gets controlled. The cost of masks, gloves, gowns, etc. has quadrupled.” (That’s about a $10 fee.)

The masses go to the Todos Santos Centro De Salud. The doctor in charge reported having almost no supplies for hygiene and protection for patients or staff.  The Padrino Children’s Foundation, which assists area youth with medical needs, is helping fill the gap. “There is currently a critical shortage at our Todos Santos Centro de Salud of very basic supplies to protect both patients and staff. Items needed include paper towels, soaps, Chloralex or chlorine bleach, antibacterial gel, and protective wear such as masks, gloves and gowns. If you have more than you need of these items, please take them to the office of Padrino Children’s Foundation in San Vicente from where we will safeguard and dispense them as needed.” To make a donation, go online and enter a note to designate the purpose. 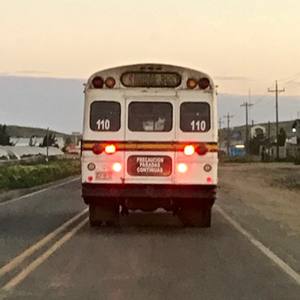 I decided on a Friday that I would leave that next Monday (March 23) for South Lake Tahoe, California. While Todos Santos was home, it was temporary. I didn’t want to be a strain on a system that could become overburdened by non-residents. While I don’t trust the U.S. or Mexican governments for a variety of reasons, I still knew I would feel more comfortable in the United States. Plus, the U.S. State Department had issued a Level 4 travel advisory saying anyone who wasn’t permanently living abroad should return to the United States. I wanted to go while I could. While I was still in Baja restaurants were closing, others suddenly started offering delivery and to-go options. Events were being canceled. I stopped playing tennis, believing germs could be transmitted on that felt ball. We had already stopped shaking hands and high-fiving.

When I drove through the San Quentin area of northern Baja last week the workers were still seated in buses cramped together as they went to their jobs. This is a huge agricultural area, with so much of the produce being exported internationally and sent to other areas of Mexico. Workers were waiting to get their empty boxes to take to the field; lined up next to each other as though nothing in the world was different. No masks, no gloves, no social distancing.

Of all the gas stations I went to in Mexico in the three days of travel north only at the Pemex at the turn off for San Ignacio in Baja Sur did the attendant wear gloves and a face mask. I thought this smart for all the people he would be encountering, plus the exchange of cash/credit cards. The attendant at the agricultural inspection station in Guerrero Negro, the line between the two states of Baja, had full garb on for protection. The military guy next to him was in his regular uniform. Neither approached my vehicle, instead they waved me on and said safe travels. At the gas station just north of Guerrero Negro the attendant wanted me to pay in cash. I always pay for gas with credit card and intended to keep doing so. Plus, I didn’t have many pesos on me. He took my Visa. I totally understood, though, why he wanted cash. The peso to dollar value is plummeting, meaning the Mexicans are getting screwed. This is why I wasn’t surprised the hotel in San Quentin only took cash (I had been warned of this via email) even though the credit card device was out in the open. They also were using their own (pre-corona) exchange rate. Again, fine by me.

I was in Cabo San Lucas on March 20. Again, no social distancing. Along the marina some restaurant workers wore masks, while at the neighboring eatery no protection was obvious. Some tourists walked about, with boat tour operators hawking their services. At Costco the paper towel was gone, as was all but one package of toilet paper. Clorox wipes were being handed out as people walked in; some took them to wipe the cart, others passed on the offer. The food court was buzzing with people not social distancing. It was alarming watching a woman lean on the counter and into the window; not a great scene with her breathing into the food prep area even under normal circumstances.

At that time bars were supposed to be closed in the La Paz region, which included Todos Santos, but Los Cabos said they could stay open until 2am. That has since changed, according to directives from the governor.

The Baja Sur governor has said: