Cash society necessitates having an eye on exchange rate

No money. Sometimes that is a reality when trying to withdraw cash in Mexico. While it has never happened to me, my sister ran into this problem in March and I know of others who have encountered this annoyance.

It seems so odd when so much commerce is based on cash transactions. One would think the banks would have enough supply so business does not grind to a halt. Many places don’t take credit cards. Some credit cards charge an exchange fee; mine doesn’t. 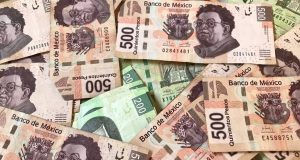 It’s a good idea to have plenty of pesos on hand in Mexico. (Image: Kathryn Reed)

The threat of no dinero has me going to the bank usually monthly to make sure I have a little stash on hand. Fortunately, my U.S. bank reimburses me for ATM fees. I’m allowed to withdraw $1,000 a day, but I can only take $500 at a time. It’s OK, though, to do back-to-back transactions. Apparently, it’s not just Mexico banks that have screwy rules. I’m able to choose between taking out dollars or pesos. I always get pesos because that is the currency of the country. Even though some businesses take dollars, it’s a better deal to use pesos.

It’s possible for U.S. citizens to have a bank account in Mexico. It’s also possible to have accounts in pesos and dollars. When the exchange rates favor one currency over the other people can transfer cash between the accounts.

Large purchases like a vehicle or home improvements are when it would be advantageous to have a Mexican bank account. It would take several days to get the cash in hand. I don’t know if withdrawing a large sum from the ATM over multiple days would trigger an alarm, so to speak. After all, the laws in both the United States and Mexico only allow for $10,000 to be brought into either country at a time without declaring it. I’m not in that league.