Delivery, payment of bills a bit different in rural Baja

No mail delivery doesn’t mean the bills don’t arrive. Instead, they are inserted into the metal gate.

This is true for the monthly water bill and bimonthly electric bill.

Todos Santos doesn’t have street numbers. Some streets on the far side of town have been named by gringos, not by the government, making one’s whereabouts even more difficult to track. Without an exact address, it’s amazing the bills arrive at the correct location. 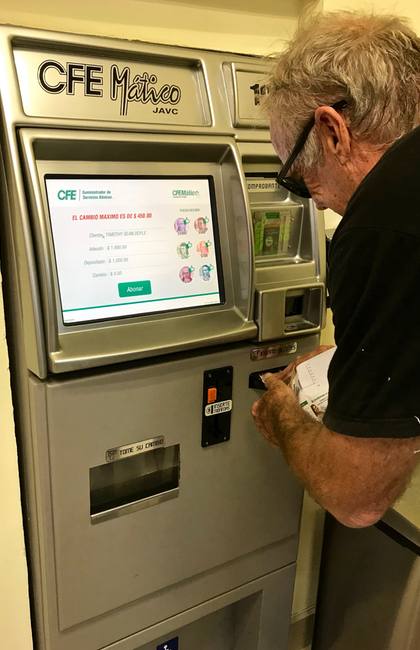 Paying the electric bill in Todos Santos via a vending machine of sorts. (Image: Kathryn Reed)

Still, even if a bill doesn’t arrive, the spigot could be turned off and the lights might not turn on. Like most places in the world, the onus to pay is up to the consumer.

One friend no longer receives these bills so she pays them when she is sure they are due. She has the billing number from when they used to arrive; this ensures she is paying her bill and not someone else’s.

No mail service means you can’t send the company the payment. Both get paid in person. The water bill is so little I haven’t even tried to pay it with a credit card. It’s about $6 a month. We all wait patiently with our bill and pesos in hand. The office in town can be crowded at times. The chatting in line reminds me of the post office in South Lake Tahoe, where it was such a social place to randomly run into friends.

The man behind the desk doesn’t say much to anyone, a little small talk here and there. He takes the money, stamps the bill “paid” and methodically moves onto the next customer.

The electric bill is also paid in town. A nuisance can be the hours the office is open; which aren’t always what’s posted.

The machine in the lobby somewhat looks like an ATM. Instead of handing out cash, it collects it. Change will be given when needed. Credit cards are also excepted, but not always. Like a lot of places in town, credit cards are accepted until they aren’t. No explanation is given, but it appears the internet could be the issue. After paying, a receipt is printed as a record of the transaction.

The electric bill can also be paid at Oxxo (like a 7-Eleven) for a fee of 7 pesos (about 35 cents). It’s also possible to get the bill via email and then pay it online, but that would require the bill be in my name. The account is in my sister’s name as the owner of the house. Understandably, she prefers her tenant receive the bill. So, the gate delivery remains.

I’ve come to appreciate what at first I thought was an inefficient way of doing business. Now I see what still seems a little quirky to be practical as well. Think of all the envelopes – sending in both directions – that are eliminated. No overdue notices are issued in this system. You know the bill is paid – not lost in the mail. Your account is credited the moment you part ways with your money.