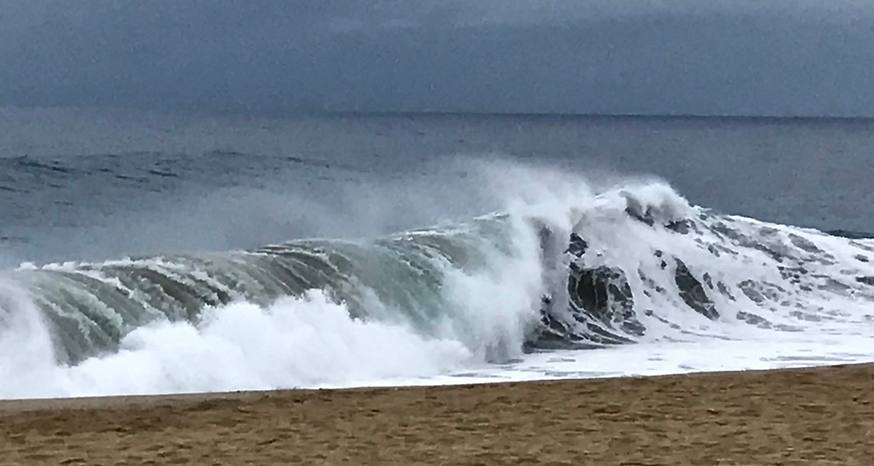 Don’t go into the mountains. Flash flood warnings. Hunker down. Secure outdoor furniture so it doesn’t become a projectile weapon.

All of these warnings came while I was 2½ hours away from my Baja home. I was in Cabo Pulmo, on the East Cape, playing in a tennis tournament. The blue sky not giving any hint of what lurked off the tip of Baja. The same sunny weather was at home in Todos Santos.

Before I left, I knew rain was in the forecast. Other than it being late in the season, I didn’t think much of it except that it could washout some matches. When it got a name, I knew it was serious. Raymond. Tropical Storm Raymond. Tropical storms have sustained winds of at least 39 mph. And he wasn’t the only one off the southern tip of Baja.

On Nov. 16, Weather.com said, “A late pair of simultaneous tropical cyclones have formed off the coast of Mexico as we enter the last two weeks of hurricane season. While having one or even two tropical cyclones active in November isn’t unheard of, it is rare to have two churning at the same this late in the year. In fact, it hasn’t happened in the satellite era before this week.” 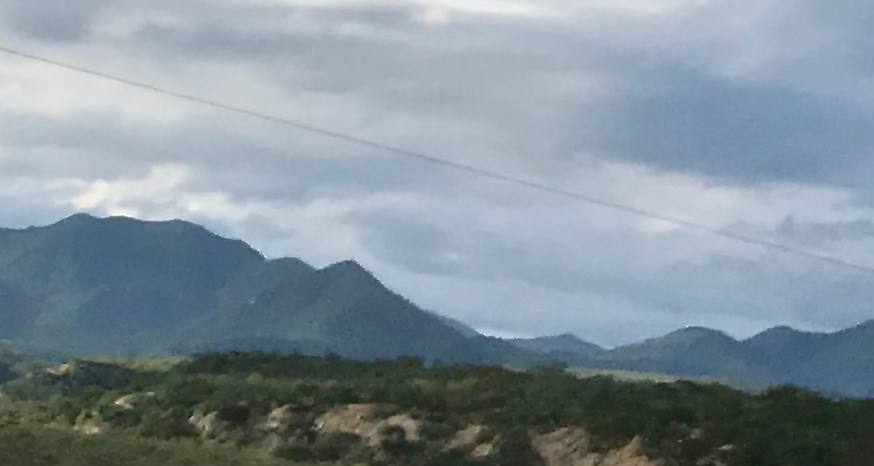 Before I left in June for the U.S. I had hurricane-proofed the place according to my sister’s directions. Basically, everything that wasn’t bolted down outside found a home inside. Since being back all items returned to their useful places – outdoors.

Living in Lake Tahoe for years I knew storm drills. Clearly different than Baja storms, but similar. One rule of thumb for storms is getting home so you aren’t driving in the storm. I knew that would be the same no matter if it’s snow or rain falling from the sky. Being in a Jeep Wrangler without side or back windows meant I wanted to drive in dry conditions if possible. Plus, the short vehicle gets whipped around in wind, so the trip could be slow-going and more wet inside the longer I was in the elements. (Good thing Wranglers have drain holes on the floor board.)

The route home goes through mountains; where people were told not to venture. Potentially worse was the first 30 minutes on the lousy dirt road that already had deep standing water from storms long gone. Even my Jeep can get stuck in certain terrain.

Tournament officials were keeping an eye on things. After all, the peninsula is pretty narrow and a storm can bring torrential rain to both sides at once. On Nov. 14 the schedulers moved all of the Nov. 17 matches to the preceding two days. People were checking electronic devices for updates. Websites all said something a little different. I was getting reports from friends in Todos Santos. I didn’t want to drive in a tropical storm. The wind scared me more than the rain; that, and not having windows.

I decided on that Friday I would leave the next day instead of Sunday. Two other Todos Santos-ites made the same decision. We would leave when our respective matches ended Saturday. Ian and I caravanned – nice because my belongings could be dry in his trunk, while AJ the pampered pooch rode shotgun with me. Plus, if the roads got hellish, I had four-wheel drive to get us all out of potential muck.

Looking west the dark clouds in the mountains were ominous. I was in the lead on the paved road. Since the Jeep doesn’t have a ton of get-up-and-go, Ian didn’t want to leave me behind and deferred to me when to pass.

I was suddenly thankful for the new tires and windshield wipers I had bought in the States. While driving I wondered if once I got back if I should put in the plastic windows, put the top completely down or leave things as they are? The top and windows are also brand new. I didn’t want the top to look like the old one, ripped to pieces, rotting at a landfill. I wondered how much water was too much water for the interior. 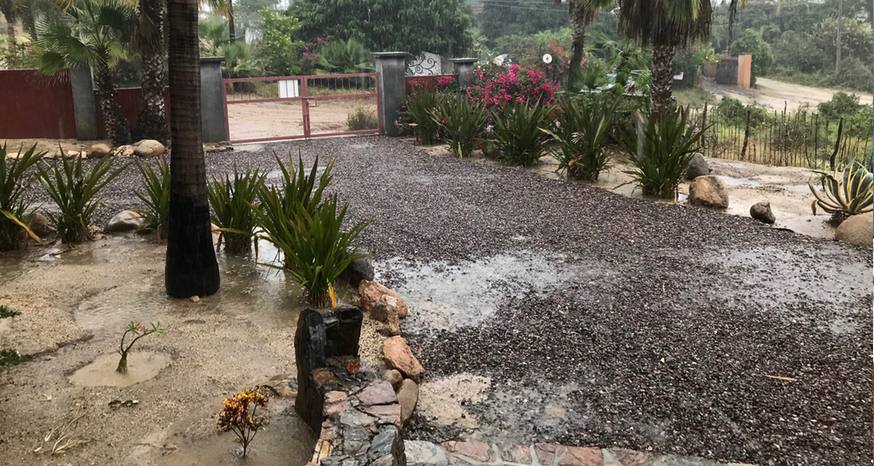 Puddles form in the front of Casa Luna in Todos Santos on Nov. 17. (Image: Kathryn Reed)

Once back on my side of Baja I filled up the gas tank and bought groceries. While the temperature would still be warm, I wanted comfort storm food I was used to. So I bought ingredients for soup and pasta to last me a few days. In Tahoe there can be a run on food at the grocery stores because people don’t know if they’ll be able to get out or if trucks will make it over the mountain passes. I don’t know what the supply chain is like here. A big worry was the lack of drinking water. Combined I had the equivalent of half a 5-gallon jug. AJ and I both drink the good water. At least the wine supply was more than ample; dying of thirst wouldn’t be a problem for me.

Todos Santos was dry upon my arrival as the sun was setting. It had been raining earlier. I opted to bring in the hammock, and all chairs on the second level. I stacked the lounge chairs and put them against a wall downstairs. The garbage can was tucked in near the water tanks. I left the Jeep top as is, hoping the winds wouldn’t be bad and knowing I could live with what rain came in.

It wasn’t until about 11pm that the winds picked up and the rain came. I slept with the main doors closed just in case it got really nasty out. It rained off and on much of the night, but had stopped by the time I awoke Sunday morning. By then Raymond had been downgraded to a tropical depression. It was eerily still outside. Grey, moody clouds covered the sky. The ocean, a mile away, did not look inviting even at that distance, though, that could have been imagination.

Nothing happened for a couple hours – much like the forecasters said would be the case. The forecast was for the brunt to hit later in the day Sunday. I opted to walk AJ on the beach; apparently now it was inviting in some weird way. I wanted to see the surf. Beautiful, wild, unpredictable. Others were there enjoying Mother Nature as well. We (me and AJ) knew to stay far enough back so a rogue wave wouldn’t snatch us away. We only got in three-quarters of a mile before the rain chased us to the Jeep. By that time the visibility toward Punto Lobos had diminished. Raymond was making his presence known.

For most of the afternoon and into the evening it rained. Hard at times, often a soft cadence. My dirt street for a time looked like a creek. Puddles formed in the yard. The wind, fortunately, was never an issue.

In the end, it was an ordinary rain storm. At least sitting at my desk it was. I need to venture out to see if there was damage in town, if roads are passable, if perhaps the fresh water lagoon filled up a bit for AJ.

My next door neighbor collects data for Weather Underground. He recorded 2 inches of rain on Sunday. According to World Weather Online, Todos Santos received 1.44 inches of precipitation on Sunday and 0.15 inches on Saturday. More is possible today. On average, the town gets about 6 inches of rain a year, with most of it coming in August and September.