Entrepreneur ridding the world of bad bugs with organic pesticides

Two kinds of insects exist in the world – beneficial and non-beneficial. The latter introduce viruses to plants by sucking on the foliage.

Cathy Ann Hill is an expert in killing unwanted critters. For nearly a decade she has been developing organic products to rid the world of unwanted pests. Her company, New World Organics, has 27 products to combat those non-beneficial insects. She even has an organic mosquito repellent.

The Canadian has been living in Todos Santos full time for five years, and was in town part time the previous four years. Hill’s interest in organic pesticides started while in Canada. She attended the University of Guelph, a horticultural and agricultural institution; and worked in farm and feed shops. Then she started giving seminars and workshops there and in Baja California Sur about organics. 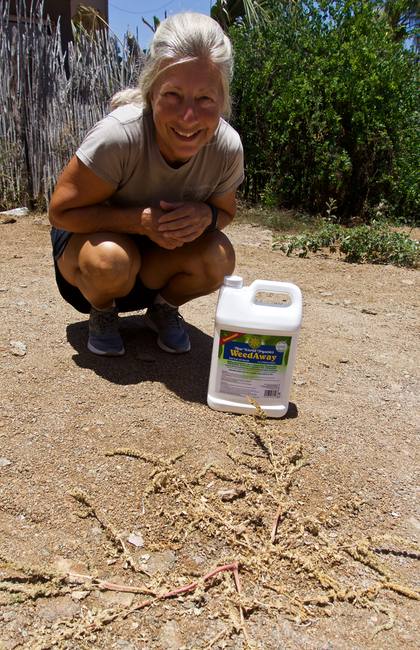 Cathy Ann Hill shows what happens when Weed Away is applied to weeds. (Image: Kathryn Reed)

Getting divorced spurred Hill to realize she could do more with her knowledge. That led to the decision to start her business in Mexico.

“The government here has been extremely supportive,” Hill said. “They have sanctioned me to make anything organic.”

By law, each product has the ingredients listed on it.

Her latest creation hit the market in May. It took two years to perfect Weed Away.

“I tweaked it to get it to work faster. This is different because it doesn’t attack the root system. It burns the top growth,” Hill explained. “There is no harmful residue in the soil. It will rival Roundup.”

It was native people – not gringos – who asked Hill to create an alternative to Roundup. Plenty has been written about that pesticide, with a California couple in May winning a $2 billion judgment against Bayer, which now owns Roundup.

The evidence of how well Weed Away works is just steps from where Hill makes the product. A weed that had been treated with Weed Away is brown, ready to be pulled. Next to it is a green one that has been left to live – at least for now. 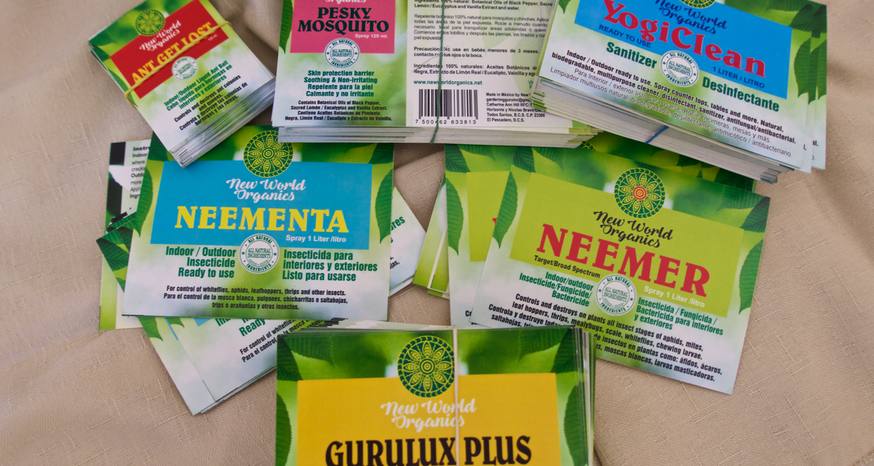 What separates organics from non-organics is the latter uses synthetic products. All have risk classifications of low, medium and high. None of Hill’s are in the high category.

“I know chemicals really well. A lot are being taken off the market. They are not only harmful for the environment, but to people,” Hill said. “With organics, there is no high-risk.”

Hill explained she has created so many products because there are soft and hard body insects. Some concoctions are better for using inside, most are for outside. Others are better if someone has pets.

Products are targeted to the homeowner, not the big farmer. Stores throughout Baja Sur carry New World Organics, though she’s always trying to broaden the distribution channels. One day she’d like to sell her goods throughout Mexico.

In order to do that her production facility will have to be someplace other than her kitchen, which is where it is now. The front part of her home is really her business. Display modules are in one area, with ingredients stacked elsewhere. Containers for the final product fill another part of the room.

With an eye toward the environment, Hill reuses water bottles for many of her goods.

It’s been a bit of trial and error, as is the norm with any business. Product-wise, her science background allows her to be inventive, to try combinations to rid certain insects from various plants. Then there is the need for labels to not disintegrate if they get wet. Marketing is an ongoing endeavor.

While this has been a one-woman show, she is looking for financial backers in order to grow the business so there is a dedicated production plant, more defined distribution system and broader audience. At the facility she would love to have customers reuse their containers to get product, so there is less plastic ending up at the dump.

Other goals include doing more outreach to teach people how to use the product, showing them how it works and why it’s needed. Hill would also like to certify gardeners and give them more tools as they work in the various yards in Todos Santos and beyond.