Experimenting with ways to combat humidity

Bags of rice now fill my drawers. Packets of silica are scattered about.

Even though the humidity doesn’t feel like much right now, I’m trying to figure out how to keep things from being destroyed, ruined, going bad. 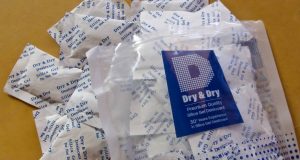 Humidity, combined with the salt air of Todos Santos, has started to unravel the stitching on the soft top of my Jeep. Other Wrangler owners here had no words of wisdom. I may eventually be topless whether I want to be or not.

August is when the heat really starts to rise, with the humidity ramping up then, too. This is also when the rainy season begins, and it continues through September. Hurricanes are a major threat those months. The oppressiveness lingers into October until one day it’s tolerable and the constant sweating ends.

There are different philosophies about what works best and if anything even needs to be done to fight humidity. Two neighbors who have lived here a while say they don’t do anything.

Another neighbor, Connie, had this to say, “I use (DampRid) in cupboards, closets, bodegas. It is pretty widely available, Home Depot, Ace Hardware. Sometimes in the local stores. It seems to work well.”

She sent a picture of the product. It looks like granules that absorb the moisture.

Then I asked my friend Sharla, who with a place in Georgia and Kentucky, knows all about humidity.

“White rice!!! Put it in anything. It works wonders and it’s safe. I put rice directly in my salt shakers. I also put it directly in my sugar – sift it out when needed. An open box in cabinets absorbs moisture like baking soda absorbs odor. It really works. You can also put it in things like chips and crackers.”

My sister who owns the house here had sugar in the refrigerator. It’s still there. I’ve added flour, too. I’ve thought about putting my spices there as well.

Saturation test per the bag: “When the indicating beads are saturated, their color will change from blue to pink. If there is an increase up to 40 percent of its original weight, beads are saturated.” It’s possible to reactivate the packets by microwaving them.

I have bags of rice in the closet, drawers and sitting on the dresser. I worry this could also attract critters. It’s a gamble I’m willing to take – for now. For someone who barely passed most science classes, this seems like master’s level experimentation.