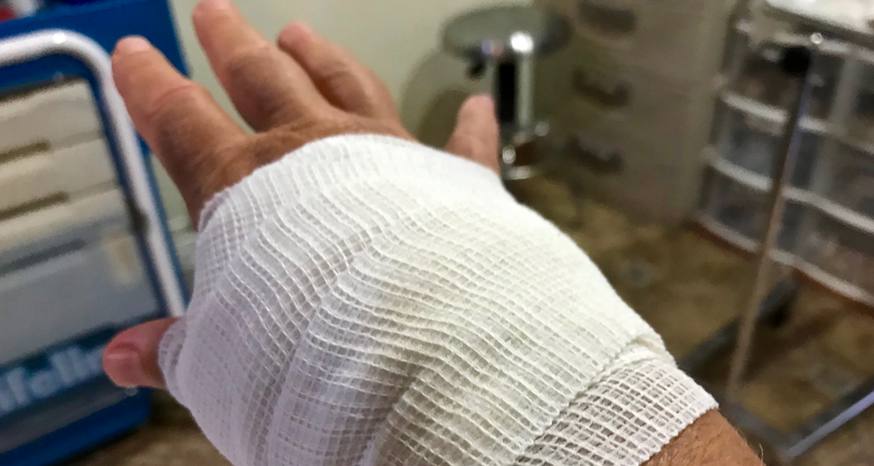 For the first time in my life I am afraid to walk my dog. That’s what happens when you are attacked.

We’re fine. At least physically we both will be. Our psyches, well, it’s going to take a bit longer. My confidence is shaken. My desire even to live here is waning.

One friend says he walks his dog carrying pepper spray, and he told me of a guy who walks with a stun gun of sorts. This isn’t the environment I want to live in. No one should have to live like this.

From what I hear, all of Mexico has an issue with street dogs as well as some frightening neighborhood beasts. Trust me, though, it’s a gringo thing too to have unsavory animals. I’m not dissing on Mexicans at all. I want to call out all the shitty dog owners who have threatening dogs. All the owners who let their dogs roam free. The owners who tie up their dogs on a chain. 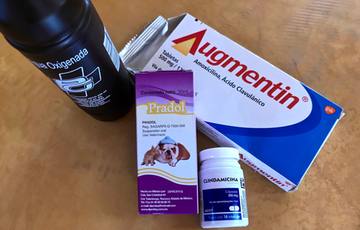 AJ and Kae are sharing some of the same medications. (Image: Kathryn Reed)

On Sunday, AJ and I were walking one of our usual routes here in our neighborhood of Todos Santos. A dog running up a side street saw us, came our way and I was able to get it to move on. That didn’t last long. It lunged at AJ. AJ was on leash, so I was able to yank it as hard as I could several times and got her away from the teeth of this predator. But the predator won.

I screamed. I kept screaming. It was a primal scream that I didn’t know was inside of me. Hours later my throat still hurt. The friend who I had been talking to on the phone stayed on the line while the device laid in the middle of the dirt street. She told me she had never heard anything like it. She didn’t know if I was being killed.

No. Not killed. Not even close.

That, though, is only because the dog owner came out. Had he not been there, I don’t know if I would be here writing AJ’s obituary or someone would be writing both of ours.

I don’t want to ever be that scared again. 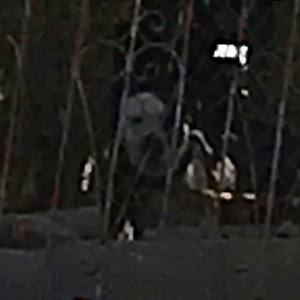 The dog, a day after the attack, chained in its cage. (Image: Kathryn Reed)

The dog wouldn’t let go of AJ. He was solid, strong, mean and knew his prey was old, weak and meek.

The owner kept striking his dog in the jaw. It wouldn’t let go of my baby.

Somewhere in the melee it got ahold of my right hand. I looked down and remember thinking I hope that tooth mark in the fleshy part between my thumb and index finger didn’t go all the way through.

A second dog struck the rear of my left thigh. I was able to get it to leave.

My screaming. It echoes in my head in a way that just brings tears to my eyes. I don’t know what I said. I don’t know if the noise was words or sounds.

The dog finally let go. The owner struggled to hang onto the abuser’s collar, being dragged by the beast. They went toward their house. I found my phone, said something to my friend, and walked in a daze toward my house.

AJ was walking fine. That was good. The punctures on my hand, while looking serious, didn’t go all the way through.

I knocked on the door of a neighbor. I must have known I wanted/needed help. No answer. I went to the door of the neighbor who is a retired veterinarian. No answer.

Home we went. I washed my hand and the wounds I saw on AJ; with her right ear looking to be the most ravaged. Still, I wasn’t sure about either of us. I texted one friend; she was at dinner. Another picked up the phone. I realized I needed a second opinion on what to do about my hand. The one gash was pretty deep.

Kerrie and Laurel came over. I thought I had pulled myself together. Wrong. I went to show them my gashes and my whole arm shook uncontrollably. I was still in shock.

Kerrie took me to St. Jude’s, the 24-hour clinic, while Laurel stayed with AJ. She sat on the floor, petting her, assuring her all would be OK. They and others have proved I have a support network here. I am forever grateful. 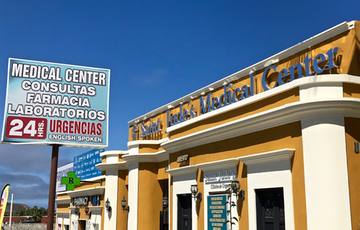 So far, I can’t say enough good things about St. Jude’s. No stitches they said because of the type of wound. There are three gashes on my right hand. Now, a day later, the bruising is evident. A bruise has appeared on my left thumb and several on my right calf. Good thing for long shorts to cover up the left hamstring area that looks like someone wanted me for dinner – oh, yeah, they did.

I left the clinic with a bill of about $36. I was supposed to go back today for the tetanus shot. That has been pushed back to Tuesday because the vaccine wasn’t available. That will be about $55.

I was prescribed an antibiotic, ibuprofen, and Neosporin. I had the latter two, so left with the antibiotic for less than $6.

AJ was seen by David Martinez on Monday. Known as Dr. David (pronounced dah-veed); he was awesome. (This is where I buy her special kidney disease food and the vet tech trims her nails.) I had found more wounds on her after my friends had left. The doctor shaved the puncture areas on her ear, tail, neck area; cleaned them out; and sent me off with pain meds, a prescription for antibiotics, and instructions to keep the wounds clean with hydrogen peroxide.

We are now on the same antibiotics after my sister, Pam, who is a nurse practitioner, told me to change what was originally prescribed to me. Lucky I’m in Mexico because no prescription was needed. This cost about $58 total for me and AJ. I got out of the vet’s office for $15.

The doctor asked me about rabies. I don’t know if that dog is vaccinated. The vet tech asked if it was a Mexican or gringo family. Mexican, I said. They exchanged a look that said, “Oh, shit.”

My neighbors know a bit about the dog’s owners and believe they are the type who would vaccinate a dog. More than one friend said they don’t believe rabies is an issue with dogs here. My head just can’t go there. I’m hoping the cops will come up with the answer.

My friend, Laurel, initiated the police report Sunday night. I tried to follow up today, but the language barrier prevented me from being able to convey details of the dog fight, bite, ordeal. The officer told me to go elsewhere. My friend, Kerrie, explained to me there is another cop shop across town.

I went there this afternoon. This is the state police office. Where I went first was the municipal office. I can’t explain why the state cops would have an interest in this, but Mary Lou didn’t hesitate to help. She took down the basic details, had me draw a map and said to come back on Tuesday with the paperwork from the doctor and receipts from what I’ve paid for. 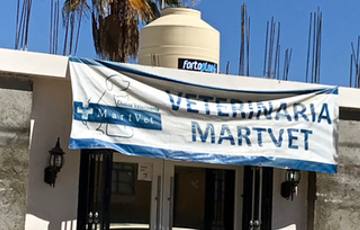 It was a bit disconcerting that she took all these notes on the back of a piece of paper that already had been written on. I wasn’t surprised the info was not input on a computer, or even on an official document with a case number. However, to have this be put on what looked like scrap paper was a bit surreal.

I’m guessing my case is being taken seriously because I was bit. Another guess – cops might not have cared if only AJ had been bit.

Animal control here? You have to be kidding. Quarantine the animal immediately? Obviously not.

I went back to the medical facility to ask for a report. Doc hadn’t done one yet. I said what time I needed it by on Tuesday. They said they would try. I’m hoping for the best, but realizing this is Mexico.

After AJ and I did all of our running around today, we went for my comfort food – French fries. We shared them. Psychologically it made me feel better.

Typing this makes me want to take more Advil. I can’t. I just had 400 mg an hour ago. Clearly, the keyboard in not my friend. I also can’t turn the ignition on the Jeep or squeeze toothpaste with my right hand. Tennis will be tested on Friday; I canceled today.

If I survive the tetanus shot Tuesday (I have a phobia of needles to the extent that I tend to faint, which can do me in for the day), I will try to take AJ for a walk on the beach. We both need that. It’s our happy place.

Still, this was the third time she has been attacked since being here. Clearly, this was the worst, the scariest, and the most damaging in so many ways. It has me thinking. Neither of us should be living in fear. She’s 16. This shouldn’t be how her last years, months, days are lived. Decision time.