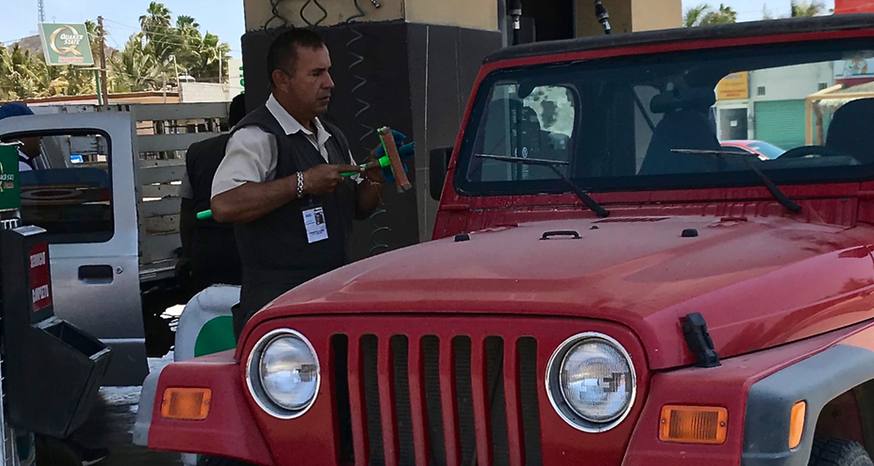 Tipping at a gas station in Mexico is one of those things that now seems normal.

Tips are for services beyond filling up the gas tank. This includes washing windows, checking fluids and putting air in the tires. Like most tips, it’s not mandatory, but expected. I tip 20 pesos, about $1, for window washing.

I don’t have much conversation with the men, though there are a few women, who work at the stations. I know to say lleno con magna – essentially, fill it up with regular. I owe that Spanish lesson to one of the guys at the station on the way to La Paz. I miss the days of a full service gas station. That’s one of the nice things about driving in Oregon, you aren’t allowed to pump your own gas. It’s been self-serve for so long in California and Nevada that it was hard to get used to staying seated in Mexico.

There was one station in Las Barriles on the East Cape that had the cashier in a little building that would be common in the United States and where drivers pumped their own gas. That, though, is the only time I have found a non-full service station. I don’t know what would happen if I started to pump my gas where there are attendants. In fact, each island has an attendant. They even wave people to their area when it’s occupied with a vehicle. I’m sure they are doing so because of the potential tip.

In Spanish I can also say if I’m paying by credit card or with cash. Gas is measured in liters here. Price-wise it’s a little more than $4 a gallon.

Most of the stations are Pemex, which is state owned. However, a law that was passed a few years ago allows outside companies to operate in Mexico. Near the California border Arco and Chevron have stations. Other brands have popped up in Baja Californnia Sur. For now, I’m sticking with Pemex or something I’m familiar with. This is despite what I’ve heard about scams going on at Pemex with the wrong change being given or too much charged on the credit card.

One thing to pay attention to in Mexico is that the numbers on the tank start at zero. Most attendants make sure you see this before they start pumping. It doesn’t mean the weights/measures are calibrated correctly. Even if I spoke fluent Spanish I’m not sure how I would win an argument with an attendant if the gauge said one thing when I know a half tank should cost something else. Hoping that issue never arises.