It takes some work to keep gravel looking pretty 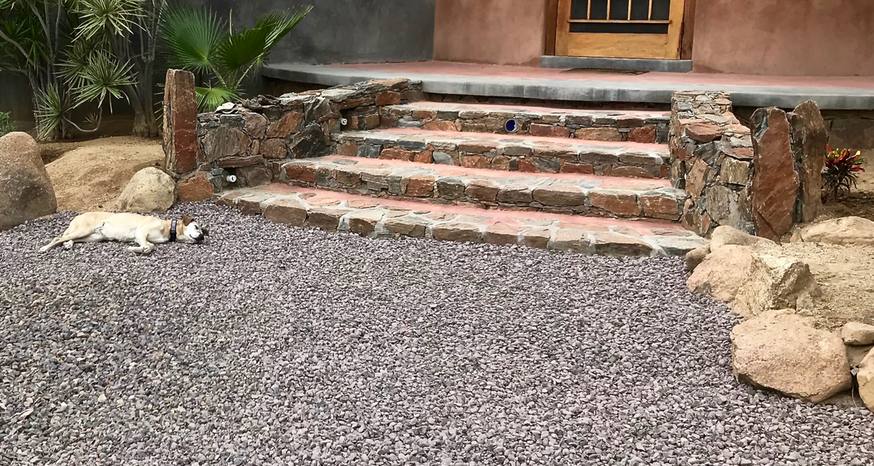 AJ gives her approval to the gravel at her Todos Santos home. (Image: Kathryn Reed)

I understand a manicured lawn. But gravel? Really?

Yep, it’s a thing. It’s not just a Mexico thing. It’s a thing wherever someone has gravel. It just so happens Mexico is the first place I’ve had gravel.

Most driveways and parking areas in Todos Santos are gravel. It goes right to the front steps at my sister’s place. More forms a walkway to the steps at the downstairs porch. It then stretches to where the back yard starts.

It is amazing how raking really does make the whole front look better.

Initially I would swear to myself when I raked. The rake is so frigging heavy it does double duty as my weightlifting for the day.

Then I learned there were rakes just for gravel. This is what my sister has. A normal garden rake that one uses for pine needles or on a lawn is going to be destroyed by gravel. A gravel rake has thick metal for its teeth. They don’t bend.

Until moving to Todos Santos I had never thought about raking gravel. Walking and driving on it spreads the rocks to places in an uneven manner. Drag a suitcase across it, well, that leaves an unwanted pattern. Rain really ruins the look of the yard, um, gravel. When it rains here it’s almost always a deluge that carries the rock downhill.

After it rains the weeds pop up, too. No fabric or plastic was laid down for weed prevention. Not sure that is ever done here.

I also use the shovel to carry some of the rock to higher ground. It’s a process.

Bare areas in the gravel now bother me. It’s an eyesore like a brown spot in grass.

I also now find something therapeutic about this gravel raking. I don’t swear anymore. I even take pride in my well-manicured gravel.