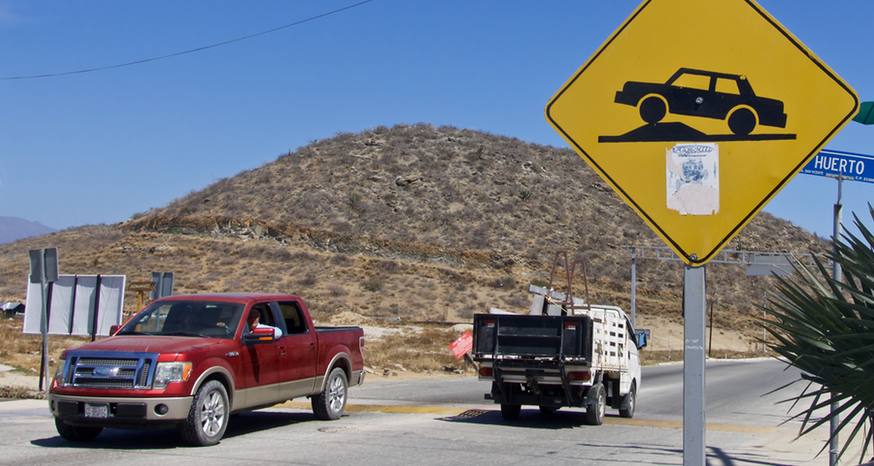 Drivers in Todos Santos heed the sign’s warning that a tope is approaching. (Image: Kathryn Reed)

Speed limits exist for a variety of reasons, with safety being No. 1.

Common sense and the threat of a hefty fine are not always enough to deter people from breaking the law. Mexico has figured out the solution – tope (toe-pay).

These are speed bumps. They are usually on both ends of a town and in front of schools. They work so much better than a sign that says go slower. These bumps mandate vehicles – even a Jeep – slow down. It’s a brilliant concept.

For some reason, I was incredibly slow to figure out where they would be placed. Driving down the Baja peninsula entails going through town after town. This means going over tope after tope. One would think I could have figured out what was going on without my sister telling me. At that time the Jeep was loaded down, including having a rack attached to the receiver hitch that had even more of my precious belongings. I had reason to go slow over those bumps. It didn’t always happen; and that was a jarring consequence, especially when the rack scraped against the asphalt.

The bumps are of varying size. Some are what a typical speed bump in the United States is like. Others have a steeper pitch. Some are round metal bumps that shake a vehicle no matter the speed. There can be multiple topes to ensure you take your foot off the accelerator. Uniformity doesn’t exist.

Not always are they visible. Still, after a while one should be able figure out there will be a tope on both sides of a town.

I’ve noticed in Todos Santos what appears to be homemade topes. People have raised the dirt in front of their residences to slow traffic. I often feel them before I see them, which really defeats the purpose.

Sometimes there is a sign signifying a tope is approaching. Some say tope. Some show a vehicle going up an incline looking like a speed bump. I have a better chance of slowing down when there is a sign. Though, it does depend on my speed, and the distance between the sign and tope.

Good thing the Wrangler was built with a suspension meant to climb over obstacles in the road. Still, there are times when AJ just looks at me, seeming to say, “Really, haven’t you been driving here long enough to know where all the topes are in Todos Santos?” Apparently the dog is smarter than the driver.