Military checkpoints the norm when driving in Baja 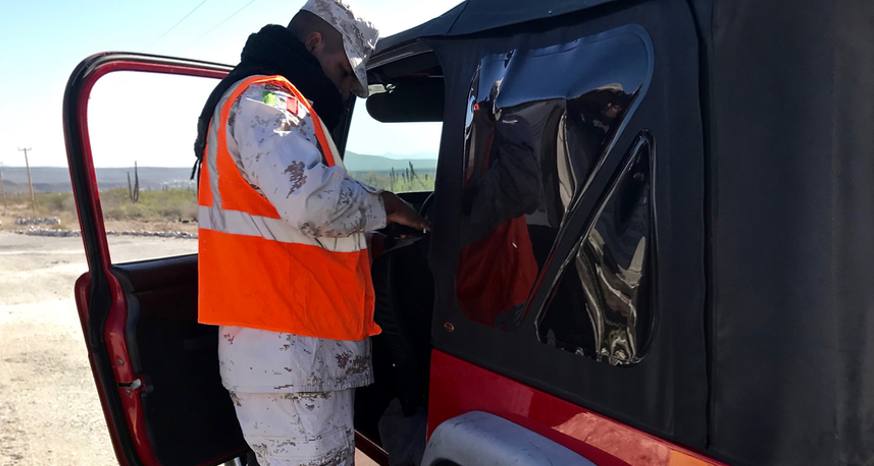 A military officer south of Guerro Negro looks for drugs in the Jeep. (Image: Kathryn Reed)

Mexican drug cartels seem to make the headlines on almost a weekly basis. While marijuana is the only drug I’ve seen in Todos Santos, I’m sure there are stronger substances being used. (Pot is illegal here.)

It’s mostly the mainland where the cartel is fighting with rival gangs, where the danger is. Even so, drug deals can go bad anywhere, and Baja isn’t immune to such encounters. People can be in the wrong place at the wrong time. A little common sense, though, can go a long way to being safe – just like in any small town or big city throughout the world.

One way Mexico tries to combat drug trafficking is with military checkpoints along the highways. What confounds me is why in Baja they don’t regularly employ K-9s. Dogs can sniff out a variety of contraband. This would be a more efficient use of resources as well as a way to catch more bad guys, and get more drugs off the street. 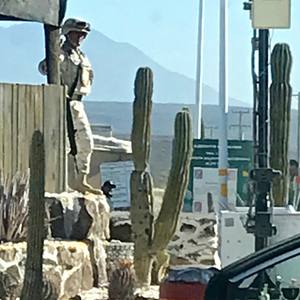 No one has used a mirror to check the underneath of the Jeep; drug smugglers have been known to tuck their stash under their vehicle. Maybe I don’t look like I warrant that kind of scrutiny.

Sometimes I wonder if these checkpoints just give people jobs. If so, that seems to be working.

In the three times I’ve driven the peninsula, I’ve been stopped once each direction to get out of the vehicle – though never at the same location. When I’ve had a passenger, they stand at one end or side of the vehicle, I’m at the other. This is to keep an eye on things, to make sure things stay on the up and up – nothing planted, nothing stolen. AJ, my dog, must come out – which is understandable. Twice they’ve looked through my backpack, always they open the glove compartment, and usually the center console.

Online forums have stories of troubling encounters between gringos and officers at these checkpoints; people being harassed, asked for money, having to unload their vehicle. Taking video is recommended when things go sideways. This is better than still pictures because it captures voices and the action. Paying any sort of bribe is not recommended. Keeping cash in multiple locations is a good idea, with very little in your wallet, purse or whatever your main vessel is for pesos and dollars. 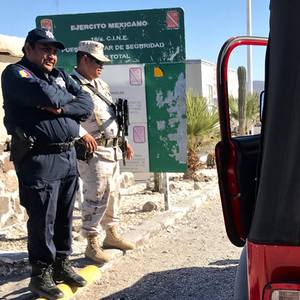 Usually, I’m waved through. Sometimes they ask where I’m coming from and going to, and if I’m on vacation. I answer and usually that’s the end of it. They don’t look me in the eye, but instead are eyeing the contents of the Jeep. Are they profiling me and my belongings? If so, I’m fine with looking like I’m not a dope dealer – or user for that matter.

At one stop last month an officer asked in Spanish about AJ’s gender. I didn’t understand the question. He pointed to himself, saying hombre and pointed to me saying mujer. I said mujer. I’ve never thought of AJ as a woman before.

In October there were three checkpoints in Alta Baja and three in Baja California Sur. (Each is an independent state, like California and Nevada are individual states in the U.S.) Checkpoints can come and go, with others more permanent. All are staffed with men (I’ve never seen a woman) armed with automatic rifles, dressed in fatigues, looking serious.

One vehicle at a time is allowed into the inspection area. I try to smile, act calm and nonchalant, but those guns can be intimidating. I have nothing to fear unless one of them were to plant something illegal on the Jeep. I don’t do drugs (except alcohol), won’t be someone’s mule, and no weapons other than pepper spray are in the Jeep.