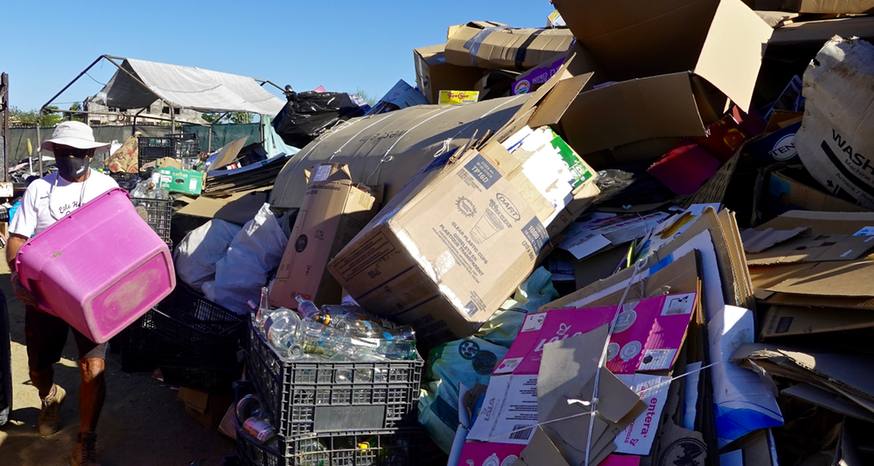 Alex Miro of Punto Verde brings a customer’s bin back to her. (Image: Kathryn Reed)

A mound of cardboard nearly falls over the 6-foot fence. It stretches about 75 feet into the recycling center and is several feet wide. It’s been sitting there for about three months.

Punto Verde recycling center on the southern edge of Todos Santos had been a dream of Alex Miro’s for years. In 2014, he secured the land and that summer the fundraising began to get necessary supplies to make the enter functional.

Today the center takes aluminum, tin, paper/cardboard, plastic, clear glass and some electronics. That means all wine bottles end up in the landfill, along with most beer bottles. Not all plastic is accepted, though tennis ball containers are OK.

The material is sorted into what looks like extremely oversized white tote bags. Eventually they will be hauled an hour away to La Paz.

According to the nonprofit’s website, “On average, Punto Verde makes about $100 per month from the sale of recyclables. Though, the trips to La Paz generally cost more than this. Punto Verde continues to follow its mission to reduce the environmental negative impact by providing an integral waste management.” 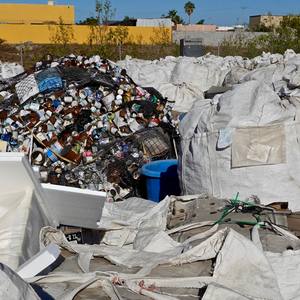 The pandemic has been brutal to the recycling industry. Many who bought recycled material stopped doing so and then the prices kept falling. Now the goods are piling up at collection centers here and elsewhere. With the demand for oil plummeting, it has meant the cost to make new plastic is cheaper today than to use recycled plastic. Fossil fuels are necessary for the creation of most plastics.

In Mexico, of the more than 100,000 tons of trash generated every day only 10 percent is recycled, according to the Mexico Daily News. In Todos Santos, people make a donation to the center for taking their reusable garbage. The amount is up to the individual, but should be calculated on the size of the load. A 50 peso donation is common; which is about $2.50.

Punto Verde has a Go Fund Me campaign going on to keep it in business. The goal is to be self-sustaining.

In the time the recycling center has been open, this is what been kept out of the landfill: