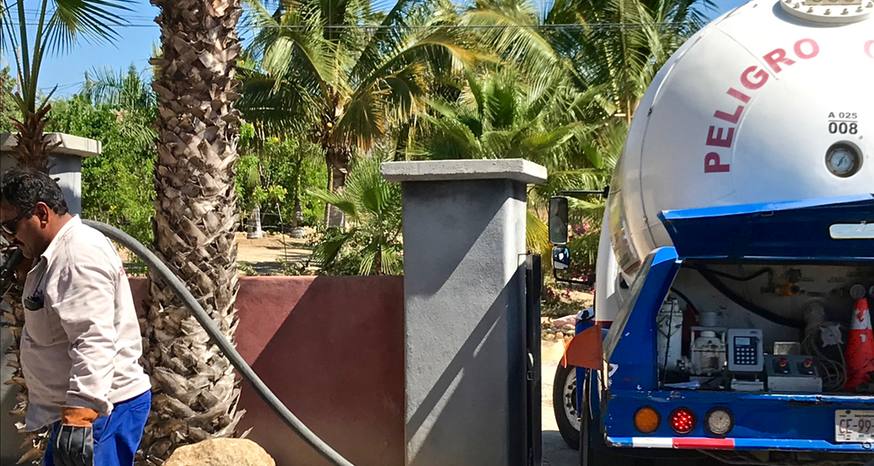 Propane is a necessity for hot showers and powering the oven-stove. (Image: Kathryn Reed)

Cold showers and the inability to cook. Those are the consequences of an empty propane tank.

The needle is in the red zone. Am I on fumes? How many fumes do I need to shower?

Being in Baja California Sur is the first time I’ve had propane other than on my barbecue. I had no point of reference for how much I would use in an average month.

In the United States the propane truck comes by on a regular basis to top off the tank, or a phone call is made and they come out at a designated time.

In Todos Santos there is no regular delivery, at least not to households. Instead, drivers cruise the neighborhoods honking the truck’s horn to alert people the truck is nearby. People literally run out to get the driver’s attention. It’s a distinct sound, with the horn going off a couple times. Pause, drive, two more beeps.

Having handmade cardboard signs is a necessity. “Gas” is written on them in bold letters. It is then set outside your residence and maybe one put on a side street with an arrow pointing toward your dwelling.

My first signs were merely on paper and not that readable. I finally got some cardboard so I am better prepared for the next time. 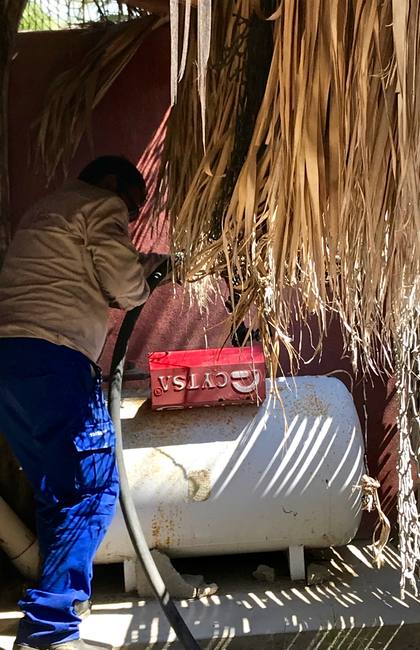 It’s also possible to call the individual drivers who come from La Paz and Los Cabos. As my indicator kept dropping, I kept calling. Mañana is what the men kept telling me. Mañana after mañana came and went to the point I was getting nervous. I didn’t know how many tomorrows I had left. I was already cutting back on showers and cooking was relegated to the microwave.

I asked a male neighbor to call. Maybe it was just another example of how there is sexism in Mexico. Sure enough, he called that morning and they were at my place sooner than expected. While I was relieved, the experience was exasperating on multiple levels.

Two guys come in each truck. Once they backed into the driveway, the two other times they lifted the hose over the fence to the tank.

The other two times I had seen them at neighbors and was able to wave them over.

I was told to have exact change. I’m not sure how important that was when I saw the wad of cash the guy had. Then I found out I could pay by credit card, so that’s what I did the second time and planned to do this last time. Good thing I had enough cash on me. The internet connection wasn’t working so the card reader was useless. It’s Mexico, this happens. Cash is a must.

Then there can be the issue of a propane shortage which occurred earlier this year. It required friends of mine having to use their barbecue for each meal as they conserved the household tank, using it for showers. There had been issues on the mainland with the fuel that eventually trickled over to the supply on the peninsula.

I still don’t really know how much propane I’m using because of having paid guests and friends/family who visit. Plus, this is the time of year when hot showers – even a bath – feels good, so I’m using more propane. When I first got here last fall in the height of the humidity, cold showers were a welcome relief and the caliente knob stayed in the off position.

My goal is to not wait so long for a fill up. That was too dang stressful. Plus, I want to be self-sufficient and not rely on someone else making the call for me.