When I called to see why the serviceman didn’t show up the previous day I was told he had and that the refrigerator was fixed. Not only that, my claim was closed.

I was home all day. No call, no repairman, and still dealing with a refrigerator that wanted to be reincarnated as a sauna. Many colorful adjectives wanted to spew from my mouth, but I swallowed them – choking the whole time.

If this were some old, crappy refrigerator, putting it out front with a sign saying “libre” might have been the answer. But this was a fridge under warranty. My sister bought it in March to replace the crappy one the real estate agents said showed so poorly. (That investment hasn’t worked out in her favor.)

It had taken a while to get a phone number for Samsung in Mexico. I started the process by finding the owner’s manual online in English, then going through the basic troubleshooting advice. After that didn’t work, I clicked on the link from Samsung’s website for an online chat. I thought it odd it cost $1, but maybe it was some Mexico thing. They had me do a little more and wait longer. Temp went from 65 degrees to 55. Not good enough. 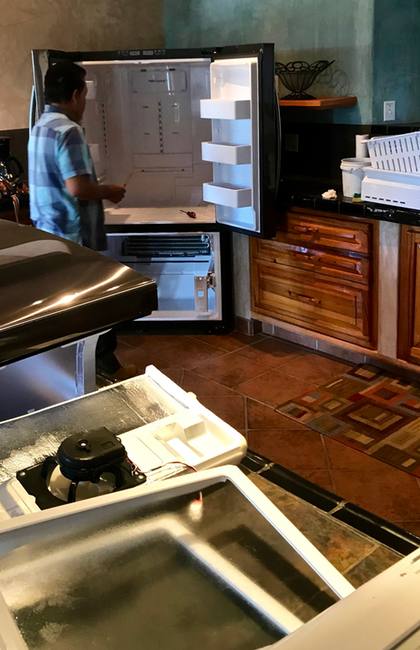 Bruno figures out what is causing the refrigerator to malfunction. (Image: Kathryn Reed)

I found a number to call. The woman on the other end got all of the info about the fridge, but should have started by asking where I was. She gave me a different 800 number for Mexico. Nope, that got me back to the U.S. Finally, I was given a number for Samsung in the country where the refrigerator is.

Living without the big fridge isn’t the end of the world for me. I have a dorm-size one upstairs that I use when I have Airbnb guests. I put it into use to preserve what little food I had. The freezer downstairs was working fine, so that was helpful.

The concern as each day went by is that I had paid guests coming. I didn’t want a repair dude coming while they were here – at least not for a non-emergency. I could give them my fridge and then live out of a tiny cooler. A friend offered fridge space if I needed it. The clock was ticking.

Samsung service in Mexico is so horrible that I will be hard pressed to buy anything of theirs no matter where I live. The number in Cabo San Lucas I was given didn’t work. Promises of when they would come were all broken. By the time I was done with the people via the 800 number, I had been given three service order numbers, with the final repair date the day after the guests arrived. I didn’t trust them. Oh, and I was going to have to pay 700 pesos (remember, fridge is under warranty) just for them to drive to the house. Apparently, they needed gas money.

I needed a plan B. Tim came to the rescue with a name and number for a local guy. Bruno arrived at 9am the day the guests were checking in. I sat with my back to him most of the time because it was disconcerting to see the appliance in so many pieces on the counter. He found the problem – the motor was frozen. The temp needs to be higher here because of the climate. Interesting, because on one of the calls with Samsung they wanted me to try setting it at the manufacturer suggested temp. (As if I hadn’t tried that already.)

Bruno was here less than two hours. Cost – 800 pesos, a little more than $40. When he left the fridge was 80-something degrees. Within hours it was chilled to 42 degrees and freezer to 2 degrees; what Bruno set them to. He made me promise not to change it. While I hope nothing more goes wrong, Bruno was awesome. And my four guests had a full size fridge for their food.

I had been sent an email with the last service number. I replied to it after Bruno was here to say I would not need them to come out that Saturday. Good thing I did plan B, because Samsung guys didn’t call until late morning Tuesday. They finally figured out they were not needed or wanted.

Oh, and that online chat service – not Samsung, but a third party that billed my credit card nearly $50 for my monthly membership. That has been rectified. Thanks Samsung for leading me down that rabbit hole. Samsung – your service sucks.