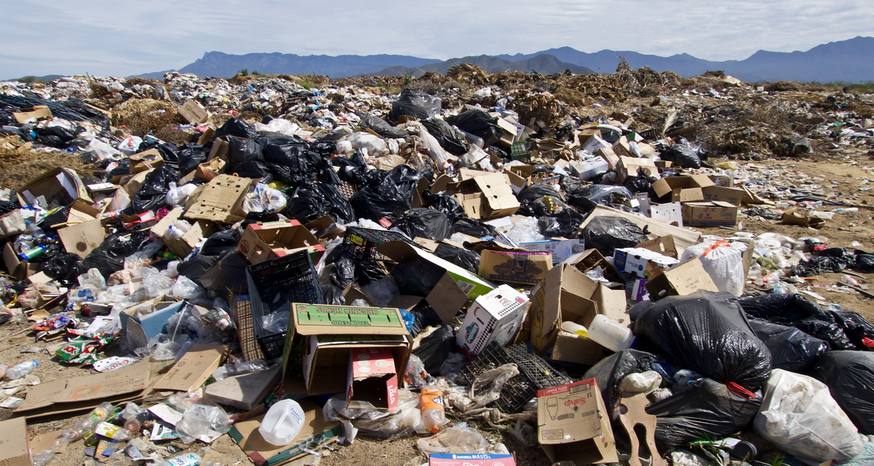 The Todos Santos-Pescadero dump was not built to handle all the garbage created by gringos. (Image: Kathryn Reed)

“The systems worked until we showed up.”

That is the assessment of Susan Mittelstadt who for 20 years was an employee of the U.S. Environmental Protection Agency in Montana. She was speaking about solid waste and in particular the landfill where trash from Todos Santos and Pescadero ends up. The “us” being gringos.

She said rural communities throughout the world, including in the United States, have similar issues with an influx of people overrunning infrastructure designed for a smaller population. Mittelstadt labeled it an “environmental justice issue,” noting how last year there were 8,000 landfill fires in the U.S.

She and others spoke earlier this year at the ACTS (Asociación de Colonos de Todos Santos) meeting on infrastructure. This nonprofit, whose motto is “together we are strong”, wants to be the bridge between concerned residents, the government, private businesses and other groups that are identifying problems and working on solutions.

Vickie Butler, ACTS vice president, said, “We probably cannot depend on more money from La Paz.” That means solutions will have to come from the people.

While Roberto Tito Palacios, delegado for the region, was at the gathering that brought out more than 100 residents, he didn’t have much to say. Still, he supports the efforts by the gringo community to work with the government and locals to find solutions.

The landfill has been a growing concern of many people because of the fires that occur there. Natural combustion is the problem. Water won’t put them out; it takes dirt and moving the debris around. These fires are an environmental nightmare as the smoke drifts to the coast, settling over the communities of Pescadero and San Pedrito. People are breathing the toxic plume, it’s settling onto agricultural fields, and seeping into the groundwater.

The dump is on land owned by the Todos Santos Ejido, it is the government that operates it. The road leading to it is also government owned.

The Zero Waste Alliance was recently formed to bring together interested parties to work on short- and long-term goals to deal with solid waste management in the area. The Tractor Project is one of the success stories. Money has been raised to lease a tractor to work the dump, and pay someone to drive it. Since the tractor’s arrival, there have been no major fires, according to Caitlin Allen. She is part of the Alliance and a key player in the Tractor Project. Moving the waste helps prevent the waste from heating to the point it ignites.

It’s not a perfect solution, though. That worker and the firefighters who are called out to help extinguish the fires don’t have safety gear. They are inhaling the fumes and whatever else is percolating there. Money is needed to keep the tractor running – gas and maintenance, cash to pay the driver, and ideally funds to buy safety equipment. A Go Fund Me account has been set up by the alliance to raise money to keep the Tractor Project alive.

As the Alliance’s name states, zero waste is the group’s ultimate goal. This means nothing would ever end up in a landfill. Garbage would be recycled, reused or composted. The Environmental Ministry of Mexico in 2019 proposed a zero waste program for the entire country. It is being fought by the plastics industry.

“It’s important to get organics out of the waste stream,” Mittelstadt said. “Compostable plastic needs to stay out of the landfill like all plastic.”

Multiple people reported that 80 percent of what goes into the Todos Santos-Pescadero landfill is organic material. This is primarily landscape debris, not food waste. The Alliance’s first meeting about composting saw 30 people turn out. Allen said people in Pescadero are willing to donate 2 acres for community composting.

Martine Gonzalez, a gardener in Todos Santos who was not at the ACTS meeting, has organized eight of his clients to buy a mulcher at a cost of 3,000 pesos each. These residents use organic compounds on their respective properties, so the end product is organic as well. They, then, have access to that product for their gardens. The device is at one of his client’s homes. It’s a closed system to prevent pesticides from contaminating their product. It is an example of what can be done on a small-scale basis.

It is going to take education and the work of like-minded people to create the change needed to fund projects and improve the solid waste system that is being strained because it was not built to handle the number of expats who live in the Todos Santos-Pescadero area or the tourists who visit.