A gentle rustling woke me up the other night. I heard it again, this time conscious enough to know it wasn’t a dream, wasn’t the dog and whatever it was had not been invited.

I flung myself over AJ, then turned on the light. Next to her, within striking distance was one of the ugliest creatures I have seen. About 6 inches long, a brown-rusty color, it was wiggling parallel to my dog’s body toward her head. A pair of antennae was going back and forth like it was looking at me or smelling me, then doing the same to its potential prey as it slithered down the bed. 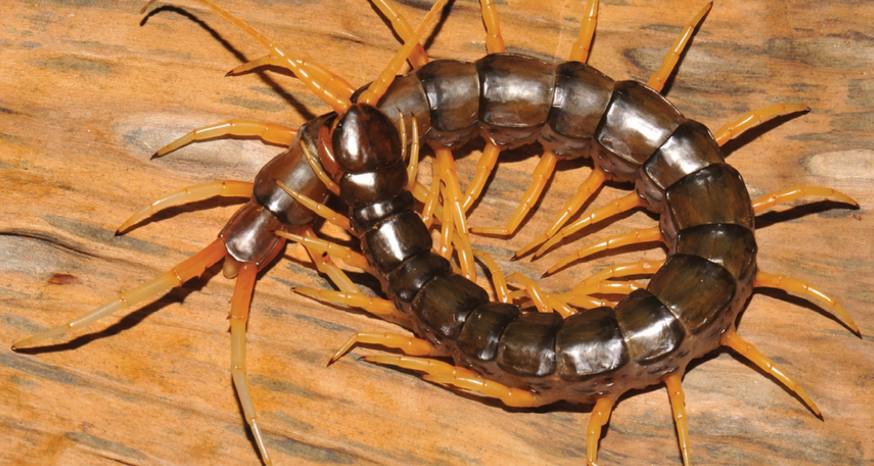 This centipede resembles the one AJ and I unknowingly were sharing our bed with. (Image: Warut Siriwut)

It wasn’t going to be good if AJ woke up and figured out what was next to her. While bigger in weight by 35 pounds compared to this creature, at 16 her agility isn’t what it once was. Plus, she’s a dog. She probably would have thought it was a play thing.

I grabbed what was closest to me, a cup. I would capture this intruder. Well, not exactly. The bed was wet with water and the centipede dropped to the floor, slinking under the bed.

I wasn’t about to search for it under there. What if it had relatives? Even if I shined a flashlight on it, was I supposed to chase it all night? What if I lost the battle? I had an 8 o’clock tennis match the next day – in a tournament, so I couldn’t be laid up with a centipede bite. The bite wouldn’t kill me, but it would be mighty painful. Not sure what it would do to the dog, especially with her weighing a fraction of what I do.

Downstairs I went with AJ’s bed, my pillow and phone.

I was a bit of a basket case once I realized to have heard the centipede, to be woken up by this animal, that it had to have been right next to my ear. Maybe it had been in my hair. I’m so glad I never felt it.

I immediately sent an email to the neighbors, and copied my sister who owns the house. “AJ and I are sleeping downstairs right now. I heard something in my bed, jumped out, turned on the light and there was this at least a 6 inch what I think was a centipede. It looked both hairy and spiky. It was so close to AJ that I didn’t want her to see it or for it to get her. I tried covering it with a glass but only managed to knock it onto the floor. It went under the bed and disappeared. I’m wondering how much I should be worried. Should I hunt for it Saturday?”

Yes, I would need to look for it, came the response. Andy came over after tennis to help me take apart the king size bed. We took each layer of bedding off – no sign of my sleepmate. Off came the box springs. Not under there; not tucked away in the Jeep windows that are stored under the bed. We searched a couple other places. No sign of it.

Andy, who lives next door, relays how a couple months ago he was reaching for a shirt in his closet and saw what sounds like the same centipede. He threw his shirt – with the multilegged thing – over the railing toward my house. I harassed him, telling him he could kill it next time or at least hurl it in another direction.

According to a paper written by Jeff Schalau with the University of Arizona, “Desert centipedes eat most anything that is small and soft bodied, which includes insects, frogs, small lizards and snakes, and rodents. Because they eat many common pests, centipedes are considered beneficial when outdoors.” So, I probably should try to relocate it if I capture it.

Schalau also said, “Centipedes are very fast and can slip through very small openings under doors, windows, and cracks.” Plenty of opportunities to get into my house in Todos Santos. “They are not harmful to food, clothes, furniture, or other items within homes, although their presence can be unnerving.” All good things to note; and I can attest to the unnerving part.

The next night I slept upstairs with a light on. I convinced myself that with it being a nocturnal animal, it would not come out with the light on. Finally, I needed darkness and off the light went about 3am; I had another match on Sunday and needed to get some sleep. A couple days later there is tiny scat on my pillow. Damn. It looked like gecko poop, but I had never seen it on my pillow before. I flashed on the conversation with a friend earlier in the week about the snake poop under her bed. I decided I had to look up centipede poop. Phew, they don’t leave evidence behind. I’m going with it’s gecko poop. Even with clean sheets, I’m still peeling back the layers of bedding and shaking out my pillows before I crawl into bed; then cross my fingers nothing crawls in alongside me.