Other than startling me at times and irritating me when they poop on my pillow, I got used to sharing my home with geckos.

They would stay high enough on the walls to avoid AJ the dog, though I’m not sure what she would do if one would have come across her path. They didn’t want to spend much time in the open when I was around. Darting behind a picture frame or squeezing into an opening or out the door was their response when they saw me. 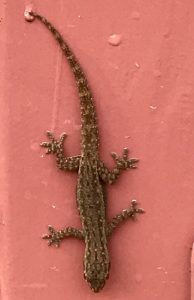 Geckos live inside and outside in Baja. (Image: Kathryn Reed)

While they are nocturnal creatures, they are out in the daytime as well. I’m not sure whose heart jumped more when we scared each other.

Even if you don’t see a gecko, they make noise–most often at night. A high-pitched screech of sorts signals they are staking out their territory or interest in a mate. The two or three quick chirps can be disconcerting, especially at night when the lights are off.

The nice thing about having geckos inside is that they eat almost any insect, as well as spiders. There are tricks to get rid of them, but I don’t see any reason to.

It’s their poop that is most annoying because it can be found anywhere. It’s distinct because of the white tip on the dark tiny turd. This is the crystallization of uric acid from their urine because lizards poop and pee from one hole. Not a day would go by that there wasn’t gecko poop on the floor. The outside table was a favorite spot for them to relieve themselves, too. It was like cleaning up after children on a daily basis.