I was born to drive in Mexico, not the United States. I don’t know how much money I have paid in traffic violations in the U.S.

In Mexico it seems the rules of the road are not enforced. (I hope karma doesn’t bite me for writing this.)

Stop signs are more like a suggestion here. Seriously. It’s like a fast yield, you just don’t know who is supposed to yield.

Some drivers slow down at stop signs. It’s much faster, though, than a rolling California stop. This is no big deal when I’m the only one at the intersection. It actually makes sense not to stop. Really, what is the point of stopping when no one else is there? It’s wonderful.

Just think of all the emissions not being spewed by an idling vehicle at a stop sign. This not coming to a complete stop business also seems to speed the flow of traffic. 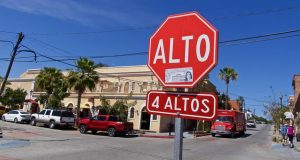 The most disconcerting thing is when there are vehicles at the intersection and no one wants to stop. I haven’t figured out who is supposed to have the right-of-way. It’s clearly not the person who got there first or the one on the right. The person who gets the right-of-way is the one who is most aggressive. In this case, that is not me. I defer to those who seem to be in a hurry. Better to stop, or at least slow down, than to play bumper cars.

I’m so well-adjusted to this don’t stop philosophy that when I was in the United States last month I didn’t stop for the red sign. Oops. I laughed to myself when I realized what I had done. I’m guessing a cop would not have seen the humor. I didn’t push it again.

Now that I’m back in Mexico, I’m doing what everyone else does. I don’t stop. Well, I do if someone in front of me has or someone is in the crosswalk close enough to be hit by my Jeep. All of this does make being a pedestrian somewhat of a dangerous sport, but that’s another story.