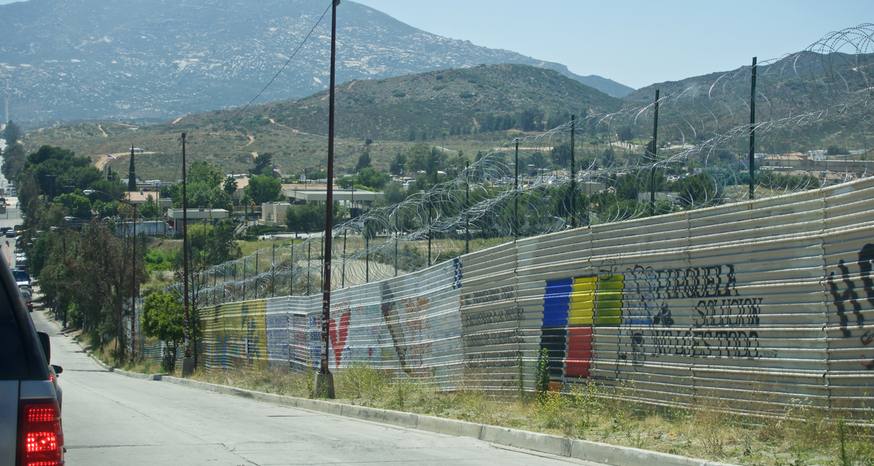 The “right” passport allows me to get to the other side of that wall. (Image: Kathryn Reed)

Car horns screaming to the point AJ was shaking and wanting in my lap. Bumpers grinding. Angry words being shouted in Spanish and English. Police officers.

This was my first time to drive across the border from Mexico to the United States. I had crossed it in college, though I was never the actual driver. I don’t remember it being any big deal then. It shouldn’t have been last month either, but my ignorance and then blatant defiance of the rules made it a bit more eventful than it should have been.

I opted to cross in Tecate; partly because that’s where I entered Mexico last September and partly because I had been told it’s easier at this location – as in the lines are shorter. 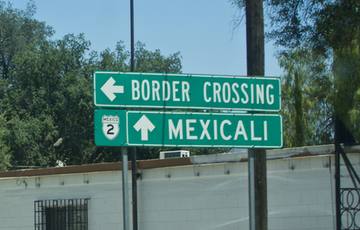 Everyone had said get there as early as possible, and always try to avoid Fridays and Sundays. I started about 7:15am from San Quentin, on the Pacific Coast, after a short beach walk with the dog. This was Day 4 of the five-day drive from Todos Santos to South Lake Tahoe. The trek in Mexico was 950 miles, with another 500 in the U.S.

It’s slower going in Mexico than the United States because the roads aren’t big, massive highways with multiple lanes. Passing can be precarious. The road widths are narrower. Big trucks like to hug the center line. The one good thing is I’ve never seen rush hour traffic in Mexico, at least not in Baja. I’m sure it’s a thing in the cities on the mainland.

Another thing Mexico has is military checkpoints. They weren’t in all the same places as when I had driven down the peninsula; some no longer existed, others were new. All but one let me proceed without delay. They asked where I was coming from and going to. I figured out to say I was going to visit my mom. This always brought a smile to the officers’ faces. And it was a true statement. 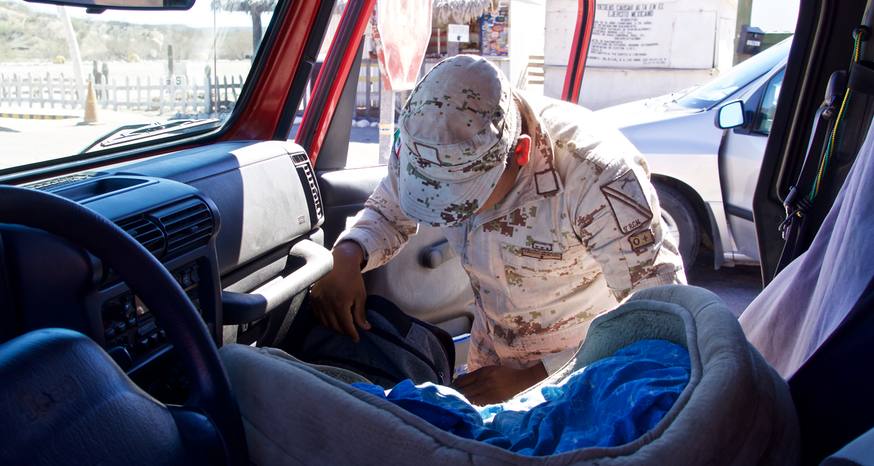 No contraband found in the Jeep by military personnel in Mexico. (Image: Kathryn Reed)

At one checkpoint I was told to get out of the vehicle, which AJ and I did. He looked in the center console – nothing interesting; under the seat – cans of AJ’s special food (much cheaper in Mexico than the U.S.); and then unzipped my backpack that was on the floorboard of the passenger side. I was watching intently from the driver’s side window. I snapped a picture; he looked up and the camera was no longer visible. I was worried because the pack contained the bulk of my cash – dollars and pesos; passport; AJ’s papers; jewelry (though I deliberately was wearing my most expensive pair of earrings); and my computer was in there. From then on I made sure the backpack was not right next to the door, but instead closer to the stick shift.

Nothing was taken, nothing planted. I was on my way.

My desire to make it to the border as soon as possible was delayed by about 90 minutes because of road construction. The road had been washed out, so even when one-way traffic was allowed it was on bumpy dirt.

A line of vehicles was stopped on the left, while trucks and some passenger vehicles flew by on the right. Honestly, I just thought this was another lane to the border. It was. The problem I later learned is that it was only for commercial vehicles. The Jeep didn’t qualify.

Horns started honking. They knew I didn’t belong. I needed to have two license plates to have been legit. I pulled over, feigning that the dog needed to pee. She didn’t cooperate.

Another vehicle was trying to enter the line. Horns, shouting – it was loud. 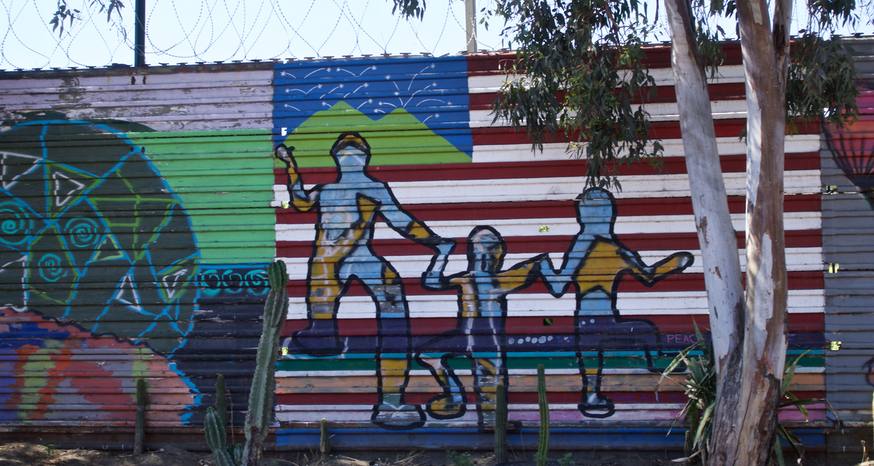 The wall on Mexico’s side is covered in an array of artwork. (Image: Kathryn Reed)

I decided to start backing uphill – in a lane where trucks were coming at me. I had to pull close to the vehicles in the correct line. People were angry at me. They yelled. I tried to explain this was my first border crossing and I didn’t realize the other lane was off-limits to me. They didn’t care. I explained I was just waiting to back up farther once the trucks passed. They didn’t care.

A friendly woman said I could enter in front of her. Really? I was in disbelief. She understood my stupidity was ignorance. I said what would happen to me if I poached the line. She shrugged.

Horns got louder. I heard someone say they were going to call the police. Then I heard the crash. The nice woman’s vehicle had just been deliberately rear-ended. She was suffering for her kindness. She got out of the vehicle; rapid-fire Spanish was being shouted. I sat there not knowing what to do. It seemed like an eternity before the police arrived. Oh, crap. Remember, this is Mexico.

Officers talked to the drivers involved in the fender bender. Soon an officer was at my window telling me I had no business being there, that I needed to go to the end of the line. I started to back up. He had me turn around to get out of there. It felt like a 15-point turn to get the vehicle to turn 180 degrees. All the while horns were honking, people were shouting and AJ was shaking. She had been on my lap while we were stopped. I got her into her seat. We made it to the end of the line with taunts the whole way.

From that point to the crossing it was 90 minutes. I don’t know how long I wasted getting to the correct line.

Along the way were vendors selling food and drinks. One guy called out, saying I found the right line. I smiled. He is the one who explained the other line is for commercial vehicles, and that my plates gave me away as a poacher. He also said I was lucky to get away with a verbal lashing by everyone. Others who have done what I was trying to do – cut in line – have been ticketed by the police.

I asked about the damage to the vehicle of the woman who had been kind. The vendor said there wasn’t anything noticeable. I was relieved. Someone else’s kindness – while in retrospect it was wrong – still didn’t warrant a damaged a vehicle.

Next time I’ll know where to go from the get-go and won’t be stupid.