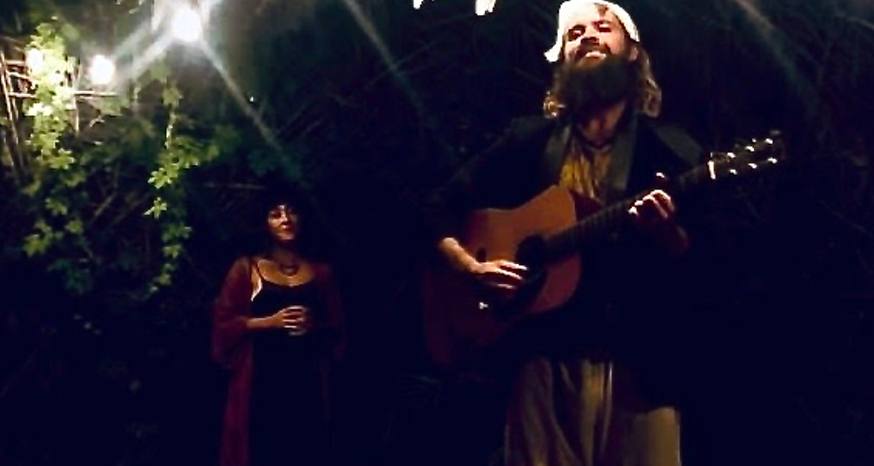 When Broadway went dark, the lights came on at Teatro Pescadero.

Dillon Porter calls it “theater in the intimate, but at a safe distance.”

When he left New York City in March it had nothing to do with escaping. It was a planned trip to Baja California Sur to spend time with his parents and celebrate his birthday. Now he has no date to return to the United States.

The 37-year-old is the director and builder of Teatro Pescadero. The first production—Kahlil Gibran’s “The Prophet”—opened in early November and will go into at least the first part of January. He and Mehry Eslaminia are the two actors. As the music director, she created original songs for the production.

“We wanted to add music. She has an incredible voice, and she is a much better guitar player than myself,” Porter said. “I think music is very close to poetry, which lends itself to dance. I like to bring some pedestrian movement into every show I make.”

They met on his last night in New York, stayed in touch, and then decided to collaborate on this project. It’s quite a change for Eslaminia as well. Rehearsals had just started for “1776”—what was to be her Broadway debut.

Porter is used to directing large productions with more than 20 people, multiple costume changes, and an audience of more than 1,000 people. Those days are gone for everyone. Though they will return, for now he is content to bring people live performances on a smaller scale.

“When careers get put on hold it’s a large opportunity for the world to slow down and figure out what is important,” Porter said. 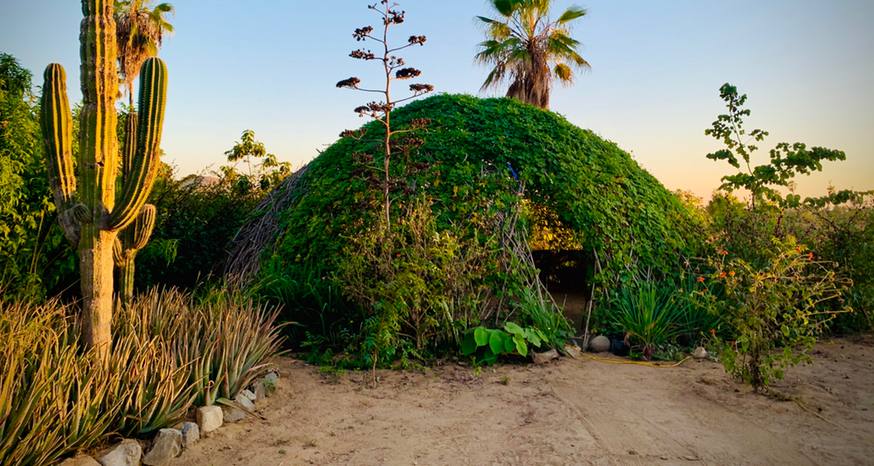 Dillon Porter built the theater from material on the land near Pescadero. (Image: Provided)

He writes, sings, acts, directs, is a filmmaker, a teacher, and an art lover. “If I am going to spend time memorizing all these words, they better be worth it,” he said, adding that the words he recites must have meaning to him.

While New York is his permanent address, Baja is in his blood. He went to kindergarten in San Jose del Cabo, and has spent at least three weeks a year in Baja every year. His parents, who hail from Oregon, have had property in the Pescadero-San Pedrito area for years. Last year they divvied up part of the property to their two children. It is on this land that Porter has created the theater.

He built the dome out of palo de arco. Bitter melon has been woven into the wood to make it look a bit like a bird’s nest. The theater in 24 feet in diameter and about 460 square feet, so it easily accommodates social distancing with an audience of six to 10. In “normal” times it could fit 30 people. For this performance, it’s possible multiple groups will be in the theater; all spaced apart from the other groups. This is with everyone’s consent.

Porter is in rehearsals with friends on a musical centered on Bob Dylan. It will be staged outdoors, with people sitting on hay bales. Eight years ago he did a performance about Walt Whitman in the nearby mountains that people have asked him to resurrect.

With the proceeds from this first show he hopes to build more domes on the property of different sizes to allow for others to be able express their artistic selves. Porter envisions (post-COVID) partnering with a university to host a festival of some sort. He’s a huge fan of Burning Man, the annual creative-artistic-cultural gathering in the Nevada desert. He wants it to feel like that without the electronic music; to have a focus on permaculture, zero waste, where writing workshops, poetry slams, and art installations take place, along with other creative forces coming together.