Cinder block by cinder block the coastline of the greater Todos Santos area is changing. But not for long if a group of residents has its way.

For several years people have been struggling to stop development on the dunes that in some cases are literally a stone’s throw from the waves crashing in from the Pacific Ocean.

A website created by a group called Protect Todos Santos was launched in May to bring awareness to people who are not intimately involved in the fight. The site is more of an educational resource than an emotional plea for change. Documents from the Mexican government are provided to substantiate the group’s beliefs.

Information is provided in English and Spanish, with the official documents also in both languages.

The site says Protect Todos Santos is an “organization of Mexican and foreign residents working together to preserve and protect the beautiful Todos Santos region from the environmental threats our community faces due to the rapid growth we are now experiencing.”

It further states, “Many battles have been waged over the years, and are currently being waged to prevent overdevelopment, destruction of our coastal dunes, and to ensure we wisely use our scarce water resources. Our success depends on all of us becoming more educated about the threats we face and working together to remediate them.”

The Program for Urban Development for Todos Santos, El Pescadero, and Las Playitas was published in 2012. It covers more than 30 miles from Elias Calles on the south to Agua Blanca north of Todos Santos. The PDU prohibits any development on primary and secondary dunes.

The problem is regulations outlined in this document are not being enforced. Protect Todos Santos is determined to be proactive and diligent to get officials in La Paz to pay attention.

One of the problems throughout Mexico, though, is government officials are not afraid to take a bribe and then turn the other way. This is often how building permits are issued when the law says they shouldn’t be.

Degradation of the environment is the No. 1 reason people want to stop this development. Protect Todos Santos has environmental experts on board to help with the cause. Leading the legal fight is local attorney John Moreno who was successful several years ago in getting the Tres Santos project in Todos Santos to be scrapped.

The law states native vegetation cannot be removed without prior consent. The citizens’ group says construction crews do what the developer says, not what the law dictates. This is how houses on the dunes have come into being. 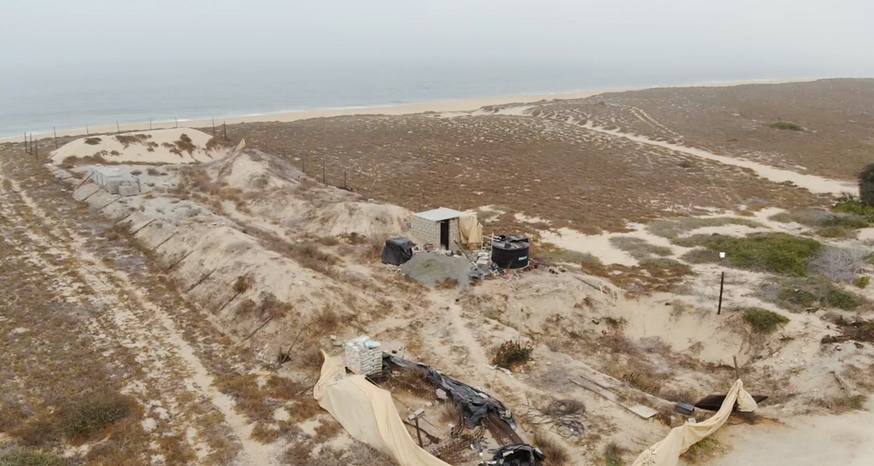 Building on this dune in the Las Tunas area of Todos Santos, Mexico, has been stopped. The hope is the owner will have to restore it. (Image: Cien Palmas Photograhy)

While several environmental studies have been conducted in this region, the last was completed in 2021. The findings are posted on Protect Todos Santos’ website. In part, it found sand lacking cohesion, making it not suitable to be built upon.

The report also found these impacts:

The report further states, “Floristically the dune cord has not changed in the almost 50 years that it was sampled for the first time (1972), neither in its topography nor in its floristic diversity. This indicates that the conservation measures that have been carried out have managed to maintain the floristic biodiversity and the geomorphology of the dune cord. This has been achieved, despite the hurricanes that have occurred and the constructions (houses and roads) behind the dune cordon. This is especially important because it also means that, as a whole, in the cordon of dunes, the ecosystem services that the dunes provide to the community of inhabitants of Todos Santos are not lost. However, the threat of its destruction is already evident when counting around 100 constructions on the dune cordon and gaps that fragment the vegetation of the dune cordon.”

What frustrates those who live in the area is that ocean front lots are still for sale. Selling them is not illegal. Building on them is.

“What we are seeing now is the dune lots are still available and being marketed to Mexicans on the mainland,” said Ken Churchill, an ex-pat involved with Protect Todos Santos. “We are trying to educate the Realtors.”

He said a big problem is real estate agents from La Paz and Los Cabos often aren’t familiar with the law and therefore tell clients they are buildable lots.

Even in 2005, seven years before the PDU was published, the Ministry of the Environment and Natural Resources (SEMARNAT)—which is equivalent to the Environmental Protection Agency in the United States—told Ocean Development it would “require prior environmental impact authorization from the secretary of the

Environment” before the developer could build. It found numerous deficiencies with the environment documents.

The document states, “The feasibility and viability of the project, in the opinion of this state agency, has been decided unfavorable due to, among other aspects,

the fact that the fragmentation of the dune system would cause ecological imbalance of the coastal ecosystem of the area, since it is proposed to build a house on each back of the dune, as well as to delimit each lot with mesh or other material that allows the wind flow, and the implementation of wooden walkways toward the beach area that cross the dune. However, this situation has not yet been evaluated in the statement in question considering the total development of the project by building approximately 50 homes along the dune system and its cumulative and synergistic impacts together with the construction of the adjoining Las Tunas II Project.”

Also noted was this is sea turtle habitat, something not addressed in the environmental documents submitted by the developer.

Daniel Kimple is listed on the document as the representative for Ocean Development. Kimple and Eddie Ogden are listed together on the A. Paraiso Realty website. The site boasts of specializing in beachfront properties in Todos Santos.

The site does not have a bio for Kimple. Ogden’s says this, “After 20 years of sales of real estate, construction and development of subdivisions in the Cabo area, Eddie made the move to Todos Santos acquiring large tracts of land with the dream to develop spectacular beachfront homes. All this with the blessing of the local ejidatario officials, state and municipal political figures and federal environmental protection agencies. Several million dollars of sales and many happy clients later, Ed continues to offer quality real estate services to all those who share his dream of a home in Mexico’s beautiful Baja Sur.”

Ogden did not respond to email inquiries asking why they continue to try to sell what they call developable lots in the greater Todos Santos area when the law prohibits such construction.

Kimple also did not answer a series of questions emailed to him, but instead responded saying federal law allows for some construction on the dunes.

He did not address the fact he cited information from the environmental impact report and not the PDU. The EIR allowed for the building of one single family, one-story home on the front 35 percent of the lot next to the road as a test case. That never happened.

The PDU says, “The dunes represent a protection system for the coastline, since they dissipate and cushion the effects produced by the force of the waves, in addition to functioning as a reserve of sand on eroded beaches. They are considered fragile ecosystems, for which the permitted uses and/or activities can only be carried out after the first and second dunes. In the dune areas that present an evident movement of sand, no type of permanent construction may be carried out, that is, in the dune area that presents representative vegetation of dynamic dunes, it is prohibited to build permanent facilities.”

Kimple contends all lots he’s involved with are permitted by three levels of government.

Not just an oceanfront issue

Protect Todos Santos also wants authorities to enforce rules that are on the books that prevent other haphazard development in neighborhoods.

After visiting Baja Sur for more than 50 years, Larry Martin in 2015 bought two adjacent lots in Todos Santos. He put a house and casita on the land.

“We chose our location due to the unobstructed ocean view and because we knew that the neighborhood was protected by the 2012 Community Plan zoning. This limits development to one house per half acre,” Martin said. “Two years ago a La Paz Realtor bought the property between us and the ocean, and secured an option on the adjacent northerly lot. Soon a sign was posted advertising six new homes on the two lots.”

Martin said he told the real estate agent about the Plan for Urban Development and how it did not allow for the density he was proposing. According to Martin, the agent had no interest in finding a compromise. This left him having to fight it out in La Paz, which handles building permits for the Todos Santos region.

“We were told that the building permit was improperly issued and that the lots were not zoned for this density. But after 10 months, rather than deciding to protect the PDU, La Paz has told us that we need to ask the courts for a decision,” Martin said.

Today, there are three houses on a lot where only one was legally supposed to be built.

Next up for Martin is to demand the government have two of the three houses torn down. This, he admits, puts these people’s investments at risk and causes ill-will in the neighborhood, even though all he is doing is trying to enforce rules that have been on the books for a decade.

Note: A version of this story first appeared in the Gringo Gazette.