Toilet paper often ends up in the can, not the bowl in Mexico

Until your hostess or concierge in Mexico says it’s OK to flush the toilet paper, assume the garbage can is the place to put soiled toilet paper.

This can take some getting used to for people who for their whole lives have not given any thought to what goes down the toilet. It’s a big deal when there is no municipal sewer system or the septic system isn’t equipped to handle the paper. 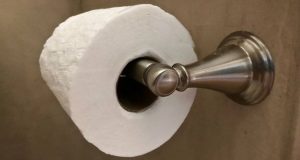 In most cases it’s best not to flush toilet paper in Mexico. (Image: Kathryn Reed)

Many public and private establishments have signs on the wall in Spanish and sometimes in English saying to use the garbage can. Even if there is no sign, that doesn’t mean you should flush everything. What’s in the garbage can will give you the answer to the flush or not flush paper question. Not all places have a can with a lid. While this may seem unsanitary to add your paper to the pile, the only other possibility is to drip dry—assuming that is an option.

Several large hotels have systems on site that can handle the paper. But don’t assume this is true everywhere. Better to not flush than to have it back up because it won’t just be paper that covers the bathroom floor.

Sometimes it’s the materials used when building the plumbing system that causes problems. The pipe between the toilet and street drain or septic system may not be wide enough to handle the paper. Sometimes the water pressure is not enough to force everything through the pipes.

Many buildings in Mexico are old—lots older than what one finds even on the East Coast of the United States. Not all have been retrofitted to be on the city sewer system, and even if they have been, there could still be infrastructure issues.

Septic systems are often small in Mexico, but they can be retrofitted. If it is large enough and paper has been kept out, it probably won’t ever need to be pumped out. Micro-organisms decompose the solid waste that settles to the bottom of septic systems, so it’s not like it’s sitting there forever piling up.

Another reason so many private septic systems don’t get full is that builders have directed only black water to go into the vault. Grey water, what comes out of sinks (other than one with a disposal), showers, and bath tubs often go onto the property to water plants. This means there is a whole lot less water going into the septic tank compared to a lot of residential properties in the U.S.