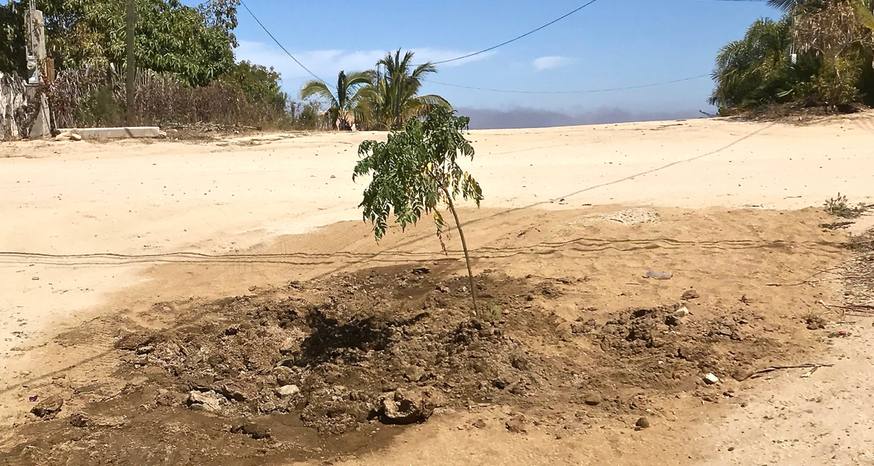 Suddenly a tree was growing in the middle of the road I live on. There were so many things wrong with this scenario.

I took a picture, then drove on to do errands. Something made me suddenly flip a U-turn. I had to ask someone about this. Potential buyers were going to come look at the house soon and this tree in the road was not going to be a selling point.

My go-to neighbor related to things that impact the house told me this was a marker for the water company to know where the leak was. I thought the wet dirt was a pretty obvious indicator. The tree, though, he said, mostly served as a deterrent for drivers to stay away from the damaged line.

Apparently orange cones aren’t popular in Baja. Maybe they would be stolen, or just don’t exist. When a large, tire-swallowing hole opened up last fall on a main street in Todos Santos, a crate was placed over it. No reason to steal it, and it was obvious to steer around it. Workers get an A for creativity and improvising.

I texted the real estate agent to let him know about the tree. He understood. It’s so Mexico. 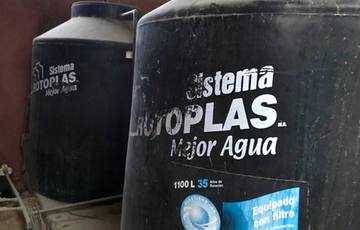 It took several days for both water tanks to be drained. (Image: Kathryn Reed)

The tree stayed for a few days. It was easily planted because fresh dirt had recently been placed on a couple areas of the street that had been particularly jarring when driving on it. That dirt is not something the city brings in. Maintenance of the side streets like where I am is up to the residents – or the ones who want to contribute.

While the leak appears to be fixed and the new dirt that was disturbed is slowed getting matted down with vehicle traffic, I was without water for a day. I didn’t know this until I went to shower. The gurgling sound and trickle of water had me hang up my towel and go check the tanks.

The two 1,100-liter water tanks were empty. Crap. A shower wasn’t going to happen; wish I had not just played tennis. If only the gardener had not come that day, there would be water.

My go-to neighbor happened to be coming over as I was walking out. Thank goodness. He turned off the pump. (Now I know where that switch is.) He discovered the valve for the line that let’s water flow from the city line to the tanks had been turned off. (Another thing about the house I learned that day.) This was most likely done by the water company when they were fixing the leak.

In the United States when there is work to be done on a water line and potential disruption in service, the resident is notified days in advance assuming it’s not an emergency. No notice here. Of course, had the valve been turned back on, I would have never known the supply had been cut off. That’s one of the good things about these tanks on the property; I should have water even if delivery is skipped for a day or two.

Water gets delivered every morning. But it can’t happen with the valve in the off position.

Neighbor No. 2 came to the rescue. He handed me his hose to start filling the tank; providing enough water for showers and toilet flushes for me and my friend who was visiting. I was still hesitant and waited on the shower. I was told it could take a couple days to fill the tanks.

Tanks were full the next morning. Phew. I’m clean.