An unexpected message from a friend who is gone

The other day when my phone told me my voicemail was getting full I started deleting calls, but not all of them. For a while I’ve kept messages from various people so I can hear their voice again if something were to happen to them.

Morbid? Maybe. But it paid off. This voicemail issue came up the day after I attended the memorial service for my friend Del Laine. I started going through the voicemails and there were several from her. I couldn’t listen to them all; it was just too hard. 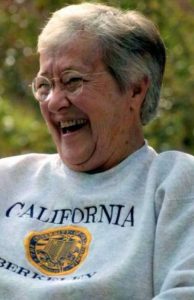 But I have them for when I want to hear her voice. I wish I had looked at the phone sooner to realize they were there. Sometimes things happen for a reason, so I won’t beat myself up for not listening to the past sooner. I’m sure I wasn’t ready.

More than 100 people were at her celebration of life on June 19—all by invitation. That’s a lot of people for a woman who was 90 when she died. She touched so many lives.

She was a force—mostly for good. Del loved Tahoe, especially the city of South Lake Tahoe. She was the first woman mayor and later influenced politics from behind the scenes.

I will always be grateful for her support (even when she thought going to Mexico was crazy), her interest in my writing (right down to wondering how to market the next book that isn’t even done—though she is one of the few to have read part of it), to allowing me to go through her extensive library to pick out some books (I wish I could discuss them with her), to our disagreements about people (some of whom were at the memorial), to talking local and national politics.

Here is the obituary I wrote per her request.