Being a poll worker provides unique look into election

If only people could get along as well outside of a voting center as they do inside of it. People exercising their right to vote on Nov. 3 were patient while at times having to wait more than an hour at Lake Tahoe Community College. Only a handful of people had to be told their mask needed to cover their nose. A few were miffed California does not require identification in order to vote. Everyone could agree on one thing—they were eager for the opportunity to vote.

As a poll worker for El Dorado County on Nov. 2 and Nov. 3, it was an up close experience into the elections process that I had never experienced. Some of my coworkers have been doing this for years. A county employee was there much of Election Day. Most of us were just ordinary citizens interested in the process. We received a stipend each day of work, which after tallying the hours came out to about minimum wage. Training was four hours, Monday nine hours, and Tuesday nearly 15 hours. (Election Day I had about 15 minutes for lunch, and was able to use the restroom one other time.) 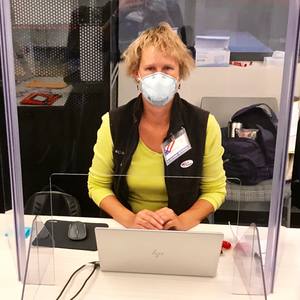 Kae Reed waiting for voters to come through the doors in South Lake Tahoe.

You don’t get to go home just because the polls close at 8pm. Anyone in line at closing hour still gets to vote. Luckily, our line was gone by then. Still, after hours we cleaned up, secured the computers and then sorted the ballots. What I mean by that is we separated the ones to be counted immediately from the provisional ones, and stacked the envelopes by color. We were not counting who voted for which candidate or even paying attention to that. What we were to do was make sure the number of ballots matched the number of signatures.

Before anyone is handed a ballot they must sign a document attesting they are who they are. This is instead of signing an envelope.

What surprised me the most was the number of people who brought their completed ballot with them, but refused to cast it. Instead, they wanted another ballot printed out in order, as they said, to vote in person. Showing up meant they were voting in person, but there was no reasoning with them. We were not there to argue with their logic, or lack of logic as the case seemed to be. People registered for both parties felt this way; most, though, were men over 50.

Multiple people said they were told not to use an envelope. This was weird advice; envelopes have no bearing on a vote being counted. SPOILED was stamped or written in red ink on the ballots they did not want to use. Then they could do with it as they wanted; I suggested it be a cheat sheet, then a souvenir or fire starter.

The few who were fine with voting with their mail in ballot needed to use the envelope it came with or a different colored one provided at the poll centers if they no longer had the original one. Those getting a ballot at the site slid the ballot into the box without an envelope.

All of this paper is one reason this could end up being the most expensive election in California’s history as well as for the 58 individual counties. Same goes for other states. California for the first time mailed a ballot to every voter whether they wanted it or not. Those ballots and the one they received the day they voted were exactly the same. This was a lot of wasted paper, ink and electricity—not to mention time. Plus, with possible record turnout, it means more paper than usual.

Other costs incurred this go-around included cleaning supplies. Every time a person was done voting that station was supposed to be wiped down. Pens were one-time use, with people told to take them with them. We ran out of “I Voted” stickers; much to the disappointment of many people. Tape covered the floor for social distancing, though that was difficult at times even though the number of people allowed in at a time was regulated. 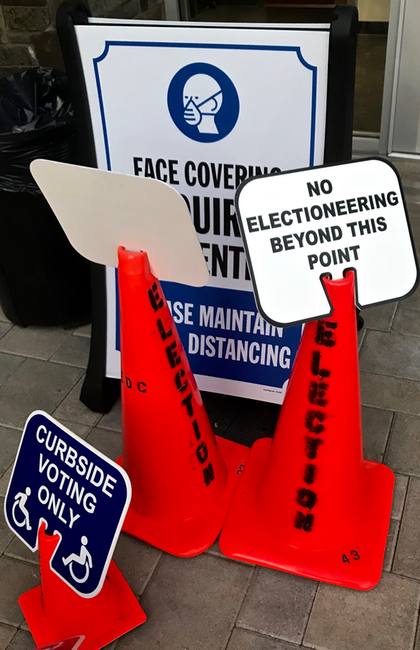 To keep myself safe I wore an R95 mask the entire first day. The second day it lasted for about 11 hours and then I went to a surgical mask/face shield combo. I got a COVID test Nov. 4 just to make sure I was not infected by the coronavirus while working.

Mostly I checked people in via a computer by verifying their name, address and date of birth. For a few, their addresses were updated. This is important because on the East Slope of the county there were more than a dozen ballots because of the various special districts—think fire, utilities, schools, city v. county items.

A ton of people registered on-site on Election Day. They received a provisional ballot in order to allow time to verify they are legally qualified to vote in El Dorado County. People living in another part of the state did not understand why we could not print their ballot. Others thought they could live in another state and vote in California. The ignorance of some people was mind-boggling.

Some thought they had to fill out the entire ballot even if they knew nothing about the candidate or ballot measures. Workers assured them a partially filled out ballot was fine; just fill in the circles you want to, leave the others blank was a common mantra.

Potential future voters at times filled the room in South Lake Tahoe. These youngsters were getting a lesson in civics as they watched their parents mark their ballots. Some parents were there with young adult children who were voting for the first time.

I didn’t see the final tally, but the LTCC vote center was on pace to have the second highest number of votes cast on Election Day in El Dorado County. While the election site says there are 202 precincts, the county had 13 vote centers—two on the South Shore.

As of the morning of Oct. 28 (when I trained for the election gig), about 61,000 ballots had been cast, with the number of registered voters in El Dorado County being135,554. This was about the total number who voted in the March primary, according to election’s staff. As of Nov. 4, the county reported 89,405 ballots had been cast, which is a 65.96 percent voter turnout rate.