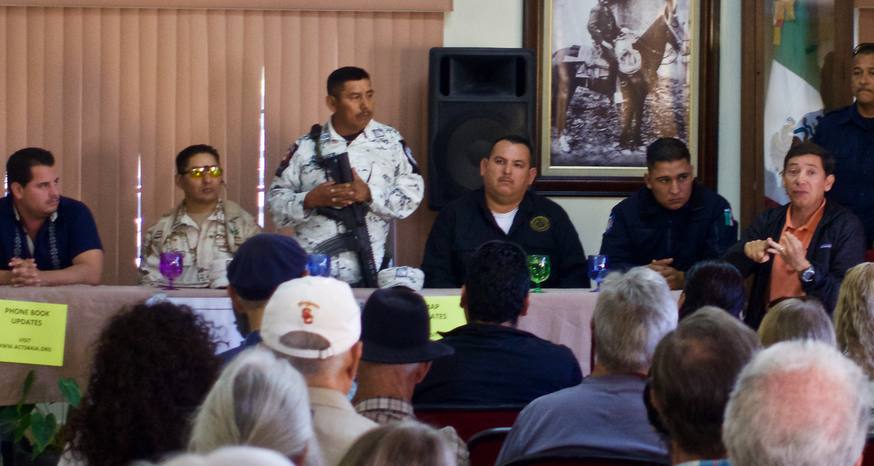 Not even the gang of law enforcement officers could answer whether it’s legal for non-Mexican residents to own a gun. And this was at a presentation in Todos Santos about safety and security.

A permit is required. Beyond that, no definitive answer. However, Mexican citizens can only own .25 caliber handguns or lower, and 12-gauge shotguns for hunting.

ACTS (Asociación de Colonos de Todos Santos or Todos Santos Community Association) at its annual meeting in January gathered the mayor, Roberto Tito Palacios; the Mexican army commander; Mexican army lieutenant; major commander from the newly formed national guard; a representative from the police ministry, which is similar to a district attorney’s office; and a local cop. Even though the marines have a base in Todos Santos, they were not represented at the meeting.

As with law enforcement throughout the world, each agency has a specialty, though they work in tandem when needed. The national guard is the newest organization. It was started by the president less than a year ago.

The biggest issues going on locally are domestic violence, traffic accidents and thefts. A dog is the biggest deterrent to crime, according to officers. Security cameras can be used as evidence in court. Alarms might scare the bad guys away.

Empty homes, especially in August, September and October, are targeted by criminals – often from La Paz and Los Cabos.

A neighborhood watch program is one of ACTS big projects. Information about it and other programs are online. According to ACTS website the purpose of the nonprofit is: “To take a pro-active role in supporting and representing our area’s interests as a recognized voting body to municipal, state, and federal government agencies, as well as community organizations, and the media. To be a valuable resource of information on matters relevant to community. To support initiatives that protect and enhance property values. To encourage responsible stewardship of the land for generations to come.”

Eight police officers work each of the three shifts in Todos Santos. Pescadero has three officers per shift and a separate commander.

Palacios blamed the higher ups in La Paz for the lack of local personnel. He would like more independence from the state capital as well as for state officials to understand the growth that is taking place in the Todos Santos area. Palacios said the local cops are struggling with eight people at any given time to handle a population of 10,000. However, in a city like South Lake Tahoe, California, that would be considered a luxury. That town has four officers per shift, plus a sergeant on the streets, (sometimes it’s a total of four) for a population of 25,000.

Todos Santos recently received two new police vehicles, with Pescadero getting one. Four officers ride around in one vehicle in Todos Santos. Perhaps if they each had a vehicle, like they do in Tahoe and so many other places, there would be less crime and/or more crimes would be solved.

Some of the nearly 100 people in attendance at the meeting wondered about the funding for the police department, especially considering officers come around “begging” for money in December. That is supposed to be the only time they ask for a handout, which supposedly goes toward their Christmas party. They have money for gas and uniforms. It was suggested donations be made for their food. It would seem like all workers in all professions would love that sort of hand out.

It was confirmed it is legal to videotape officers when being questioned or if they are asking for cash. If anyone suspects police corruption, they can go to the delegado, aka mayor.