Birthdays are a time to celebrate and reflect

Birthdays, to me, are an opportunity to take stock of the past year and make plans for the next.

It’s not the same as making resolutions at the New Year, despite this being my personal new year. The assessments are not something I pronounce to the world. It’s an internal reflection, taking time to note what has happened in the last 365 days. It’s personal – not delving into the news cycle or even others except how they might have directly affected me. It’s not about dwelling on the bad or basking in the good; it’s more of an acknowledgment. 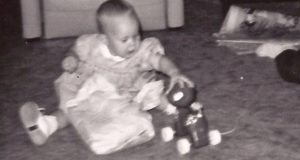 So often as we are leading our daily lives we don’t pause. We move through the moment, not always recognizing the significance. Sometimes it takes time to understand the impact of certain things. It could be as simple as saying I want to do a little more of that or a little less of this. Mostly, though, it’s about assessing the past more than planning for the next year.

I write this on the eve of my 54th birthday as I sit waiting for my Jeep to get a new radiator and four new tires. Not the most exciting birthday gift to myself. This 17-year-old Wrangler needs to get me down to Baja next month and back to the U.S. next year.

Birthdays have always been fun. My parents made them special for me and my three sisters. We could have whatever we wanted for our birthday dinner, including dessert. My dinners would vary – from fondue to my dad’s barbecued chicken to something else. Dessert was always the same – chocolate cake with chocolate frosting and homemade chocolate chip ice cream.

Last year I was in Todos Santos for my birthday, having arrived earlier in the month. I knew few people. I invited the neighbors over for dinner without telling them it was my birthday. It was perfect. Those four are friends of my sister’s; this gave us an opportunity to get to know each other better. We went the whole night without me ever saying it was my birthday; and still, it was so special.

I know I will be getting my cake this afternoon as my tennis friends have planned a party on the courts. On my birthday I will be dining on my favorite pizza at Skipolini’s in the Bay Area; a stop on the way to a book signing the following day. I really do love multiday birthday celebrations. It’s going to be a weekend of fun.