Brockovich rallying people in U.S. to be involved with local water issues

Erin Brockovich isn’t done fighting, and now she wants to enlist everyone to combat water pollution.

“Water is a story and not a sound bite,” she said during a talk Aug. 26 hosted by the Los Angeles Times. “We the people have to be involved in wanting change. Water belongs to all of us whether you are a Democrat or Republican. Every time you add a chemical to water you change that water.” 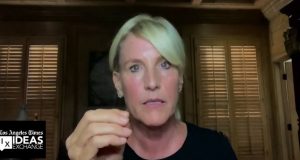 Brockovich came onto the national scene in 2000 when Julia Roberts portrayed her in the movie about how Pacific Gas & Electric Co. contaminated the groundwater in Hinkley, Calif. Hexavalent chromium (better known as chromium-6) was the main chemical seeping into the groundwater. While PG&E had to pay millions of dollars, the cleanup to this day is not complete.

That story and ones like what happened in Flint, Mich., make national headlines. It’s all the other water contamination issues that worry Brockovich because without a spotlight shined on them often little or nothing is done. This is true in El Dorado County. Ever since Lake Tahoe News went out of business the coverage about the contamination at the Diamond Lime Plant has not made the news on this side of the county. It’s still a big story.

Brockovich recently released the book Superman’s Not Coming: Our National Water Crisis and What We the People Can Do About It (Pantheon, 2020). She said in the book she lays out a path for people to become more involved in water issues.

“If you see or smell something at your house (in the water), make it your business. Pick up the phone. You can effect change,” she said. “At so many city council meeting they talk to themselves because we don’t show up.”

She said she wrote the book for people to see the bigger picture when it comes to water, adding that it’s a larger issue than most people realize. Brockovich encourages people to get a copy of their water district’s annual report and actually read it.

“We need a comprehensive water policy across the board,” Brockovich said. “We need to admit we have a crisis.”