Music evokes many emotions, even biases. It can be soothing and headache inducing. It can bring people together and can be divisive.

What comes to mind when you hear the word “mariachi” or even Spanish-language music?

Nothing favorable – that would have been my answer a few months ago. Sometimes all it takes is being introduced to alternative sounds to change one’s mind. It is what I call the good Mexican music that now brings a smile to my face. It doesn’t matter that I don’t understand the lyrics.

Even so, that beat that sounds like its roots are polka-inspired and always seem to be played loud enough so every neighbor can hear still makes me cringe.

Until a recent trip to Tlaquepaque on the mainland of Mexico I had never heard a mariachi band I liked. They were always some weird attraction at Mexican restaurants in the United States that interrupted a meal instead of enhanced it. The eight-member all-female ensemble that plays regularly at El Patio in this suburb of Guadalajara is outstanding. 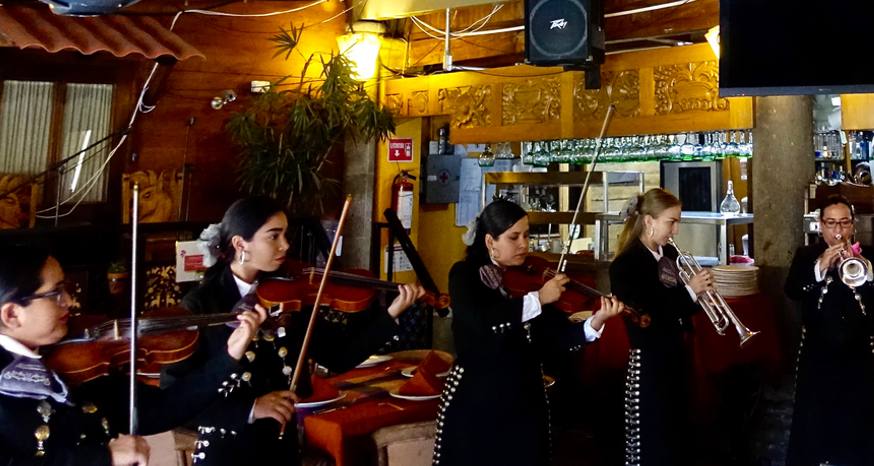 The sign outside El Patio restaurant advertises mariachi femenil, but does not indicate if it’s the same group. The one on the last Tuesday in January captured the diners’ attention as the group moved from area of the restaurant to the next, serenading multiple people at once.

Mariachi is a type of musical group that originated in Cocula, Mexico, near Guadalajara. Originally, the groups were quartets. They were poor farmers who found a way to entertain those around them. Today groups can have upward of 20 musicians. Each group usually has violins, trumpets, a Spanish guitar, vihuela (five-string guitar), and a guitarrón (a small-scaled acoustic bass). A harp can also be found in bands.

The women at the restaurant had more than one vocalist and one member did double duty with a flute.

Guadalajara is now home to the largest international mariachi festival in the world. The 10-day event starts in late August.

More than one mariachi group has been a contender for a Grammy. This year (the awards ceremony is Feb. 10) you might want to pay attention to the Best Regional Mexican Music Album category.

There is much more Mexican music besides mariachi. To get a fun taste of Guadalajara, this music video shows a variety of artists as well as a bit of the region. Watch it to the end to see where the various artists are recording from.

Like the United States, there are also a multitude of music festivals in Mexico. Every January is the Tropic of Cancer Music Festival in Todos Santos. A highlight this year, as has been in past years, was La Santa Cecilia. (Saint Cecilia is the patron saint of musicians.) The Grammy-award winning, Los Angeles, California-based ensemble is on tour. The energy is amazing. It’s irrelevant if you don’t understand the words. You’ll be dancing in no time.

If La Santa Cecilia doesn’t change your tune about Mexican music, it’s possible nothing will.