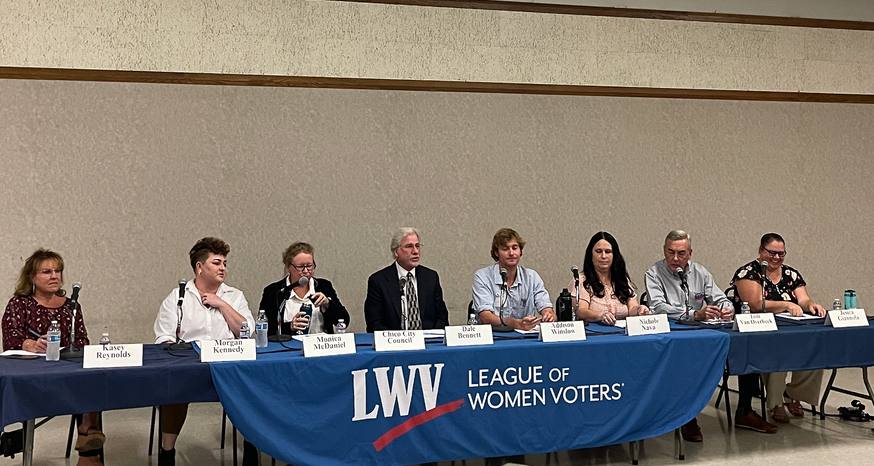 What a difference it makes seeing and hearing candidates in person versus reading about them whether it’s through campaign materials, news articles or letters to the editor.

In some ways it was refreshing to attend the Sept. 27 forum put on by the Chico chapter of the League of Women Voters. I didn’t know a single candidate. I didn’t know anyone in the room other than the two people I went with. This is quite a change from my days of living in South Lake Tahoe.

What disappointed me was how the League of Women Voters did not explain which candidates were running for which seat. There was no formal introduction of who each person was. The event was run as though the audience knew who everyone was, whether they were an incumbent or challenger, what district they were in, and like we had some knowledge about them. It’s been a while since I’ve felt like an outsider at a local political event. It was interesting, informative and a bit enlightening.

What it made me realize is the importance of hearing candidates for myself. Something I encourage you all to do no matter where you live and the offices being contested. Your vote matters, but so does your understanding of the candidates and the issues.

I had few expectations. I had only made a couple early judgments based on signs. One guy’s you can’t even read. While driving I pulled over only because I could see the word “tennis” so that got my attention. It turns out it is someone’s last name. Another dude has so many signs that it makes me wonder where all the money is coming from to pay for them.

Chico now has district elections for City Council and school board; much like a lot of jurisdictions. This all came about so ideally people have representation from where they live. But it also means I only get to vote for one candidate. This council has seven members, while the school board has five members. Call me old school, but I like at-large elections better. But then again, I’ve never felt like I was not represented—at least at the local level.

Neither of these offices are partisan, though based on what some of them said it was easy to know which side of the aisle they would line up on.

Mostly I was surprised (though probably should not have been) by anger, hostility, and lack of compassion expressed by some of the candidates. I would never vote for Matt Tennis. Wow—his words, his demeanor—all anger. (Glad I’m not in his district; though it would be great to vote him off the school board.)

For council, it’s a big no on Tom van Overbeek. He exuded zero compassion for the unhoused community, which is still the No. 1 issue in Chico. Even in his closing comments it was like and us vs. them instead of being inclusive.

While most of the council candidates were in favor of Measure H, which will raise the sales tax one percentage point, many had reservations. It would go from 7.25 percent to 8.25 percent.

I will vote no against Measure H because the money will go to the General Fund instead of being allocated for something in particular—like roads. Plus, there is no sunset for the measure; this means the added tax will go on forever. This means the council will be able to spend the money however it wants. It might not be spent how I would choose. This could be better summed up as: I don’t trust the council to do the right thing.

If I could vote in each district, for council I would choose Morgan Kennedy, Monica McDaniel, Addison Winslow and Jesica Giannola. For school board it would be Tom Lando and Eileen Robinson. The district 1 candidates did not participate on Tuesday night. However, considering Tennis threw his support behind Rebecca Konkin, this would have me marking my ballot for Scott Thompson.