CO2 shortage is a bad thing for multiple industries

Despite an excessive amount of CO2 in the atmosphere changing the Earth’s climate, throughout the country that same gas is in short supply, creating problems for breweries, wineries, as well as contractors and the health care industry.

Rich Gottwald, CEO of the Compressed Gas Association, said, “Right now you read or hear about CO2 almost always in a negative context, but it’s necessary for a lot of applications.”

Dry ice is the frozen form of CO2 (carbon dioxide) and wineries use it during harvest. Spread over grapes, the heavier gas displaces oxygen to keep the produce from spoiling.

“For this year’s harvest we had 30 percent less (CO2) to sell,” explained Glen Irving, sales manager with Complete Welders Supply in Napa.

The company makes dry ice at its Napa, Rohnert Park and Stockton locations and supplies North Bay wineries, microbreweries, metal fabrication businesses, as well as laboratories, universities and an Air Force base. 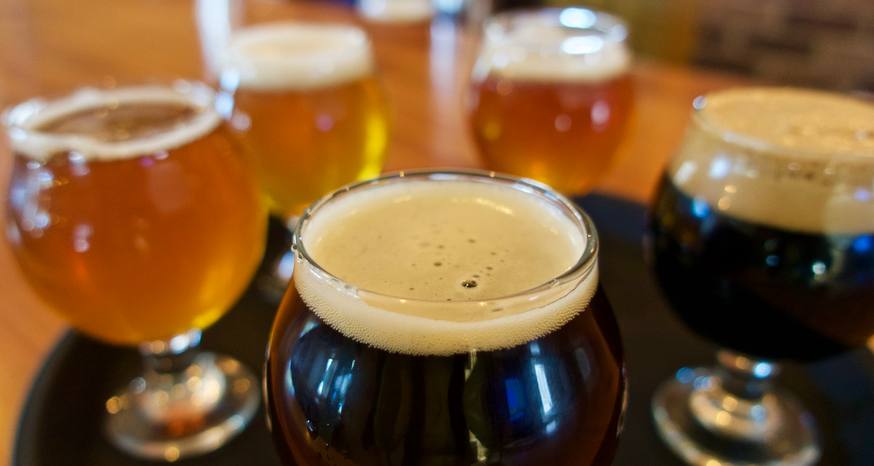 Without carbon dioxide, beer would be flat. (Image: Kathryn Reed)

“The past three months have been very tight, but we are just about out of the worst of it. There are all kinds of issues that affect CO2 supply. Regionally one of those issues is the use of CO2 during the harvest season for grapes by wineries,” Mike Guilford, head brewer and production manager at HenHouse Brewing Co. in Santa Rosa, said.

In the big scheme of things, the almost 9,000 brewers in the United States use a fraction of the CO2 consumed in the business world. Nonetheless, without that gas it would mean having to drink flat beer, thus making it a vital ingredient in every can, bottle and keg.

“The beverage industry is a fairly low user of CO2 and breweries are fairly small. Small brewers are at the far end of the supply chain,” said Chuck Skypeck, technical brewing projects manager at the Brewers Association. “It is expensive to move. It needs to stay cold. The best way to travel is by rail.”

The trade association representative noted most breweries are not adjacent to train tracks, thus necessitating the delivery by tanker truck, which adds to the cost.

Brendan Moylan is dealing with a spike in CO2 prices for his breweries—Marin Brewing Co. in Larkspur and Moylan’s Brewing Co. in Novato. He’s been operating them for 33 and 26 years, respectively.

“As something as simple as a cylinder of gas was $2 or $3 a month for rental. Now they are charging $20/month rental. It’s not nickels and dimes, it is dollars and dollars,” Moylan said. “We were profitable at the breweries for a number of years. They have not been for the last couple of years for a number of reasons and CO2 is one of them.”

The small, portable CO2 cylinders are exchanged between client and gas distributor. They often are used when breweries go to festivals and other off-site venues. Moylan said his refillable containers at the breweries can hold hundreds of pounds of the gas, with a cost of $1,000 to fill one.

At HenHouse, which has its production facility in Santa Rosa and a tasting room there and in Petaluma, the cost of CO2 has increased 60% this year.

Not only do breweries consume CO2, they also off-put it in the production phase.

Guilford, who manages production at the Sonoma County brewery, is taking a proactive approach to the carbon dioxide issue because he doesn’t anticipate the supply chain returning to pre-pandemic levels, nor the price coming down.

“We recently purchased a CO2 recapture system. It will be installed by the end of the year and will allow us to capture some of the CO2 that is coming off our fermentations,” Guilford explained. “This used to be a technology that only very large breweries used to be able to possess. But Earthly Labs out of Austin, Texas, has produced a unit that is perfect for our size brewery. Basically, during fermentation, yeast is eating sugar and creates about equal amounts of alcohol and CO2. Right now, most of that CO2 is just released to the atmosphere. What we will be able to do is capture that CO2, turn it back into a liquid, and store it until we need to use it.”

This means HenHouse won’t have to buy as much CO2, it will be using a cleaner product because it won’t be sourced from a refinery, and the company will reduce its carbon footprint.

Guilford didn’t put a price tag on the recapture system, but said it should pay for itself in about three years.

“I think the brewing community as a whole needs to take responsibility for our environmental impact and (the CO2 system is) one way to do that,” Guilford.

Complete Welders Supply, with its headquarters in Rohnert Park, is one of the largest CO2 distributors in Northern California.

In addition to supplying CO2 for adult beverages, CWS provides the cannabis industry the same gas. Many indoor grows use the gas to increase plant yields by enhancing the photosynthesis process. Plants become more robust as they absorb the CO2 in combination with light. CO2 can also be used in the extraction of cannabis oil.

Carbon dioxide is what gives popping candy that zing, carbonated beverages their fizz, and fire extinguishers compression to shoot foam. The gas is also used when casting molds to make them harder. Larger abattoirs often use CO2 instead of electrical guns to stun animals before they are slaughtered. Nail guns and other construction tools operate because of the gas as well. It can also be used in water purification plants.

A new customer for Complete Welders Supply during the height of the pandemic was LGC, Biosearch Technologies, which has facilities in Novato and Petaluma.

“They manufacture components for COVID test kits. One of the things they need is dry ice to produce this,” Irving, who works in the Napa branch of CWS, said.

Gottwald with the Compressed Gas Association, said, “A lot of CO2 in this country for food and beverage grade comes from ethanol in particular. Ethanol is used as a blending agent in gasoline. We get CO2 in production off ethanol. We liquefy and clean it up and sell it.”

The trade group represents about 140 companies.

When the pandemic hit in March 2020, people stopped driving. The domino effect was refineries cutback production and many ethanol plants shutdown. Some have not reopened, which has kept the CO2 supply in a state of flux.

In late 2020, the Marathon Petroleum Manufacturing plant in Martinez closed after sputtering at the onset of the pandemic. Marathon is the largest refinery in the United States, with 13 other locations.

It was the main supplier of CO2 for Matheson, which distributes various gases throughout the country. Matheson also has retail operations, including in Santa Rosa, and its bulk department is in Vacaville.

“When Marathon stopped producing fuel that stopped our raw supply (of CO2),” said a salesperson not authorized to officially speak for the company.

That refinery is being reconfigured into a renewable diesel plant. When operational again it could loosen the supply chain chokehold.

“As a renewable fuels facility, we anticipate capturing in the range of approximately 65,000 to 75,000 metric tons (of CO2) per year once the facility is operating at full capacity,” Jamal Kheiry, Marathon spokesman, said.

The Martinez facility expects to be back online next year, with full production slated for 2023.

Even though Compressed Gas Association’s Gottwald said, “Why ethanol and fertilizer are good is because it gives very pure CO2” he knows entities are working on other carbonization processes like nitro. But he said that doesn’t have the shelf life like CO2 does.

Skypeck with the Brewers Association knows new processes will have to be developed to keep beer carbonated because CO2 supplies are going to change what with the push for electric vehicles. Electrification will mean the ethanol and oil refinery industries are likely to produce less CO2 even when the pandemic supply chain kinks get worked out.

“There are new technologies being developed that are to capture CO2 directly from the air, but at this time it really only works on a really large scale,” Skypeck said. “I imagine in 10 to 15 years it will look really different. But what it will look like I don’t know.”

A version of this story first appeared in the North Bay Business Journal.