Colonoscopy can be a life saving exam

My stomach was gurgling before I finished the 16 ounces of liquid. Before I could wash it down with the prescribed 32 ounces of water I was in the bathroom. And so began the prep for my colonoscopy.

This was my fourth time to undergo this procedure—all at Barton Memorial Hospital in South Lake Tahoe, all by doctor Dan Norman. Unfortunately, when I return in five years he will be retired. I remember the first time I had this done it was shortly after I had been fired as managing editor at the Tahoe Daily Tribune for refusing to blur the lines between editorial and advertising. I still harbored hostile thoughts about the publisher. It turns out these two men went to college together. To this day I wonder what I said while I was sedated. 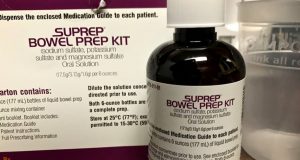 The prep for colonoscopy is usually worse than the exam. (Image: Kathryn Reed)

I started having this exam when I was 40 because my dad had colon cancer. He is one of the lucky ones, in that it was caught early and he lived many years after the chemotherapy. Among cancers, colon cancer is second behind lung cancer as the top killer of people in the United States.

“However, more than one‐half of all cases and deaths are attributable to modifiable risk factors, such as smoking, an unhealthy diet, high alcohol consumption, physical inactivity, and excess body weight, and thus potentially preventable,” according to the American Cancer Society.

An alarming statistic is that the number of people younger than 50 who are diagnosed with colon cancer is increasing. Fifty is the usual age men and women should start having routine colonoscopies, though some groups now say to begin at age 45. ACS says symptoms of colon cancer include:

Fortunately, all of my colonoscopies have been clean. What made this last one different was that I did it without being sedated. The in-take nurse talked to me about this option, telling me about her experience. Knowing I would have an IV so the drug could be requested on demand helped make me decide to try it. Plus, I’ve had more than one cavity filled without the use of Novocain, so I knew I could handle some degree of pain.

Being a bit squeamish at times when it comes to medical things, I was not about to fixate on the screen showing my innards. When I did glance up it was gross and fascinating at the same time.

I had been warned that when the device went around the corners this would be the most painful. I verbalized my discomfort. A nurse put pressure on my stomach, which helped. At one point someone said my blood pressure had dropped to 43, which is when I was told to take deep breaths. I did so into my mask, trying to stay calm as this device made its way through my intestinal tract. At 80 percent done and my moans getting a little more pronounced I was asked if I wanted the drug. No. I could do this. I knew I needed to keep breathing and try to stay calm because that would make the whole process easier on me and the doc.

I survived—no drugs. This meant I had the rest of the day to do what I wanted. Normally the anesthesia knocks me out for the day and sometimes makes me a bit loopy into the next day. I’m quite the lightweight with drugs and prefer not taking them. I was tired that afternoon, and certainly hungry.

The new prep was better than what I used last time. It was not covered by my insurance, but was worth the $128. Part of the formula was taken the night before, the second dose was ingested early morning the day of the procedure. In the past all of the liquids were consumed the night before. This time I also could not eat anything other than liquids on the day before the exam. I lived on water and vegetable broth that day. It meant having less to clean out and that I would be even hungrier when all was said and done.

The bottom line, pun intended, is that if you haven’t had your colonoscopy, do so. With drugs, it’s completely painless. It could save your life.