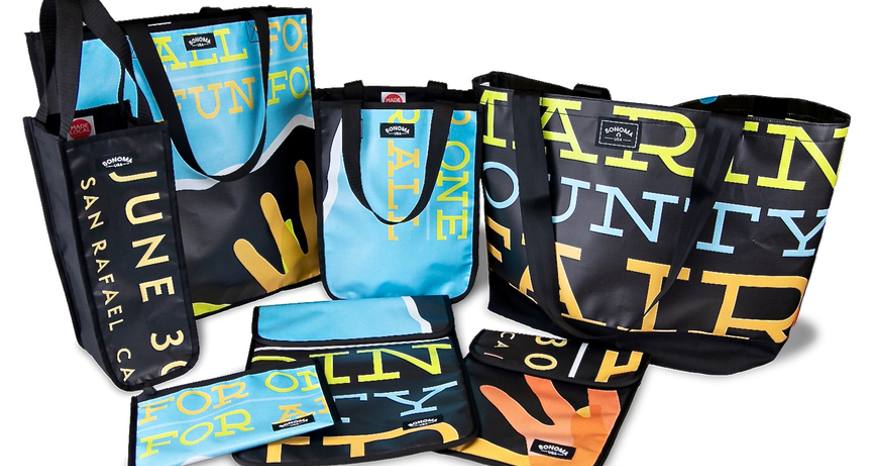 Wine, tote and other bags started out as banners for the Marin County Fair. (Image: Steffen Kuehr)

When he looks at vinyl event banners and all those billboards along highways, he sees totes, wine carriers and messenger bags.

Kuehr, through his Santa Rosa company TekTailor, takes other people’s garbage and repurposes it into functional items. It’s called upcycling—the transformation of waste into a product people want.

Among his most ambitious undertakings was to look at what might be done with thousands of pounds of fire hose from the 2019 Kincade Fire that burned in northern Sonoma County and the 2020 Glass Fire that ravaged parts of Napa and Sonoma counties. Once a hose has been damaged it cannot be used for another fire.

“The fire hose was not easy to work with because it’s thick and hard,” Kuehr, 46, said. “We have to create products around the characteristics of the material. With the fire hose we soak it in a tub with natural cleaning liquid, power wash it, and hang it to dry.” 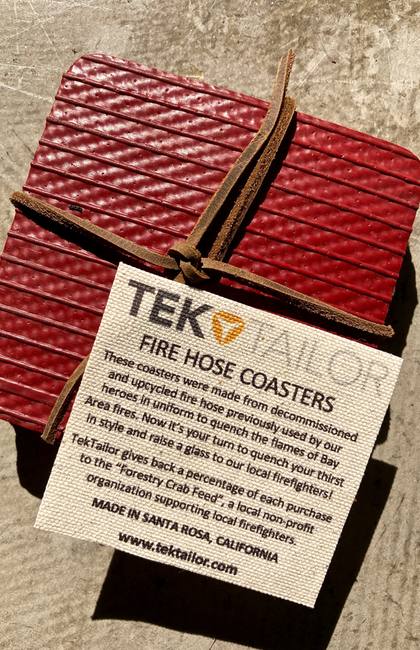 Each TekTailor product has a tag explaining what the original product was. In this case the drink coasters were once hoses used to fight fires in Northern California. (Image: Steffen Kuehr)

The company had 4,700 pounds of hose from the Glass Fire and another 2,500 from the Kincade Fire. The width and pattern in the hose help determine what it will be in its next life. During the holidays the biggest seller for TekTailor was the coasters made from the fire hose. A set of six costs $20. They are still available; with more than 700 having been sold.

Recology Sonoma Marin was the waste company responsible for disposing of those fire hoses.

“Steffen opened my eyes to all the reuses instead of burying (the hoses). It has awesome markings. He has made it into floor mats, into belts, dog leashes and wallets,” General Manager Fred Stemmler said.

The primary reason Recology wanted to partner with TekTailor was to keep the hose out the landfill. A bonus was not having to pay $560 to get rid of the material.

“Our company’s focus is on zero waste even though we are a garbage company,” Stemmler added. “I wish more people were thinking like (Kuehr) and making goods with resources that we think of as trash today.”

Kuehr doesn’t pay for the material he receives from a company. He makes his money by reselling the new products via the retail store in Santa Rosa and on the company’s website, as well as selling product back to the companies which gave him the reusable goods.

He shies away from putting products in other stores because at some point they cannot be reordered. That’s the nature of a constantly changing supply chain. Is the business financially successful?

“With regards to company revenue, I’d rather leave that information out. Not big enough yet to brag about it unfortunately,” Kuehr said. Plus, he is also into philanthropy, with some of the proceeds from fire hose sales being given to a nonprofit that benefits firefighters. 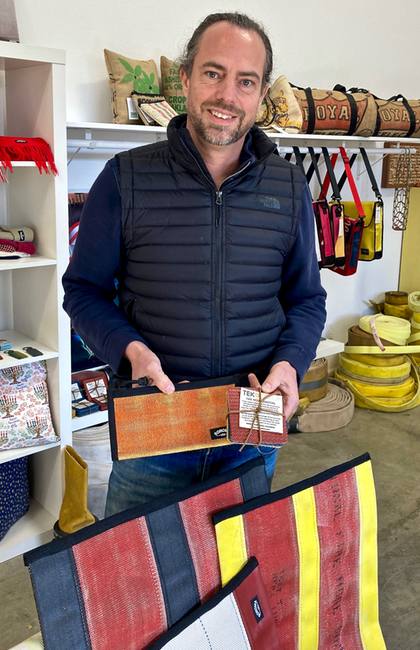 Kuehr admits what he needs to do is better tell his story and that of the products.

“Every project, every material, every banner has a cool story. That is what gets people’s attention,” he said.

To help tell that story most of the end products come with a tag showing what the original discarded item looked like and the company it came from.

For now, most of what TekTailor works on is from the North Bay. Kuehr would be willing to expand his territory if the business with the goods paid for the shipping. He also needs to know he can do something with the product and then sell it. He doesn’t want a lot of material hanging around either to be made into something or ready to be bought.

He is willing to experiment. Kuehr took a roll of artificial turf from Sonoma Raceway and didn’t ask for more. “It was so dirty there was not much we could do with it.”

TekTailor’s 12 employees have access to more than 60 industrial sewing machines in the 20,000-square-foot Sonoma County warehouse.

“We have a lot of different machines here,” Kuehr explained. “We have machines to set snaps and grommets on products. We have a heat stamping machine so we can do leather labels with embossed logos.”

Kuehr took over the company in 2010 from his in-laws.

Billboards, burlap sacks, vinyl banners, old linens and more are all products the seamstresses and tailors at TekTailor work with.

“Billboards tell part of the marketing story of a company,” Kuehr said. His background is in marketing so his creativity comes from that standpoint, not as someone who sews.

Clover has bought some of the mini-shopping bags made with its billboards as gifts for employees. The general public has access to the product via TekTailor’s website. 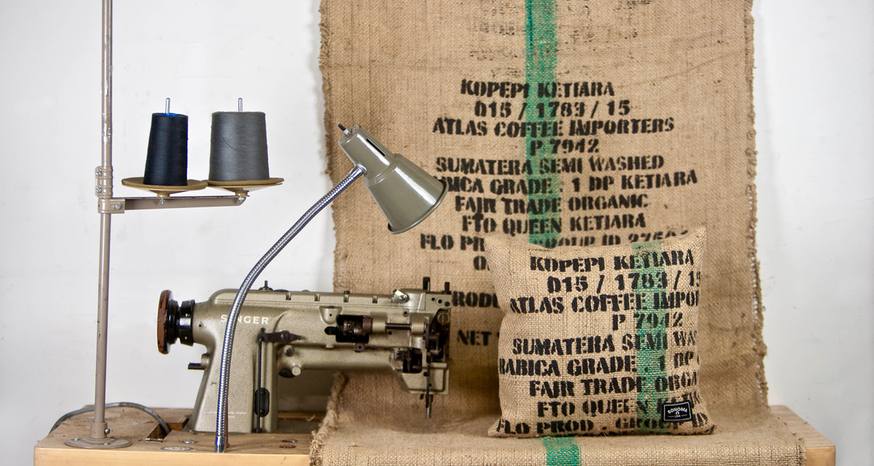 “His stuff is a much higher quality and has unique design features to it. It is generally in line with what we paid before, but much higher quality and cooler options,” Kristel Corson, chief revenue officer with Clover Sonoma, said. “The larger billboard tote bags are incredible in durability. They are far stronger than the typical Trader Joe’s shopping bag.”

Kuehr approached the Petaluma-based dairy company a couple years ago about repurposing the vinyl material on its billboards; something Clover had not realized was a possibility. The company has eight billboards throughout the Bay Area that are changed out quarterly.

When it is held, those who attend the Marin County Fair are able to buy products made from the banners used at previous fairs.

“The messenger bags are always popular, as are the tote bags, and the wine carriers,” Libby Garrison with the fair said. “During the holiday boutique the single bottle and double bottle wine carriers were really popular. I like the clutch purse. It’s a makeup case with a zipper pocket.”

“The advantage to working with Steffen and TekTailor is he picks up banners, cleans them, and remakes them and sells them through his website. The organization gets a percentage of sales so it’s a win-win all around,” Garrison said.

Weaver’s Coffee & Tea in San Rafael has given TekTailor burlap sacks from around the world that originally had more than 100 pounds of coffee beans in them. Some bags are more colorful than others, and the burlap is not all the same.

Alvarado Street Bakery in Petaluma has provided bags from wheat berries. Bags are 4 square feet in size, as well as 4 feet high when full of product.

At the fine linen rental company La Tavola in Napa decommissioned table clothes and other linens have been upcycled by TekTailor. Once the material is stained it is taken out of circulation and then repurposed by Kuehr’s people. Mostly the linens become tote bags. Some of the tablecloths are sold as fabric in TekTailor’s store. Custom napkins were created for one customer.

“We have made one-off products. A little architecture firm had three little pull out banners that we turned into six or seven tote bags that they bought for their team,” Kuehr said.

Sonoma Raceway has been a partner with TekTailor since May 2016 when it comes to signs at the track. Vinyl banners, which are not biodegradable, are what get repurposed. The best seller from the raceway has been the 50th anniversary banner from 2019.

Steve Page, who retired last year as the raceway’s general manager and president, initiated the relationship with TekTailor.

“It dawned on me we were sending a lot of material to the landfill when we were changing out the corporate banners,” Page said. “We have huge walls that face the track; I would say dozens. Some are more than 100 feet long. They are designed for the TV viewer from a distance.

“It’s an ingenious initiative on Steffen’s part. It’s wonderful for us to know we are not dumping all of this into the landfill and there are cool products on the market.”

Page has as an iPad case and a couple wine carriers from those banners. The track has given out wine carriers filled with wine to drivers, team owners and others.

“Our goal is to work with more big businesses to turn them into more meaningful corporate gifts, to move away from the old random swag. We can turn their banners into unique products that let their story live on,” Kuehr said.

This article first appeared in the North Bay Business Journal.