Creating an altar for dogs on Day of the Dead

Photos of the three most significant dogs in my life are in my bedroom, so why build an altar for them?

Why not? Was my short answer. 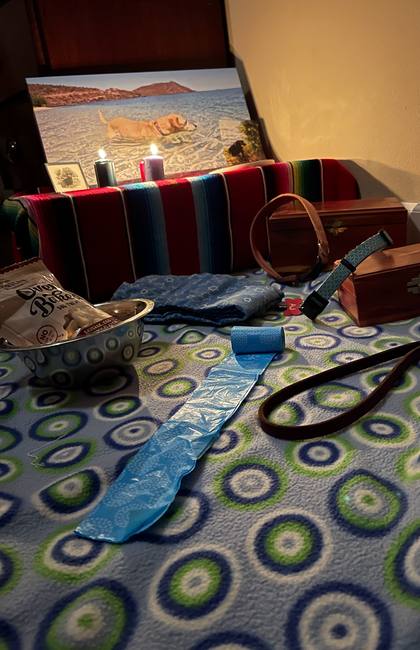 An altar for dogs who are no longer in this world. (Image: Kathryn Reed)

Dia de los Muertos (Day of the Dead) has been a ritual for thousands of years. It’s an Aztec tradition rooted in what is today Mexico. The celebrations, though, have been growing in popularity every year.

In large part this has to do the 2015 James Bond movie “Spectre” and “Coco” the 2017 movie. The latter truly makes it easy to understand what Day of the Dead is all about. Mexico City’s first Day of the Dead parade was the year after the Bond film debuted. Now it’s a tourist attraction.

I decided with the death this year of my dog, AJ, that I would build her, Bailey and Nefi an altar, also known as an ofrendra. Nefi was the Dachshund I grew up with, while Bailey was the first dog I had as an adult.

I thought it appropriate to make the altar in my bedroom where AJ used to sleep. Her bed was donated to the humane society, but I still have her blanket and other items like her bowl and leash. I also have the pine boxes containing her ashes as well as a larger one containing Bailey’s. (She was a black Lab; almost twice the weight of AJ.)

Photos of all three dogs were on the altar. Dog treats and poop bags were also part of the display.

A candle was lighted for each of the four leggeds.

The belief is that on Day of the Dead there is no separation between the spirit world and real world, with those who have died returning to feast, dance and celebrate.

I sat at the foot of altar thinking about all three of these dogs and the important roles they played in my life. It was good for me to pause, to be reflective. It made me realize I need to do this more than once a year.