Danger lurks when driving at night in Mexico

“Don’t drive at night.” It would be hard to find someone who would argue differently when it comes to Mexico.

The danger isn’t what you think. It’s not bad guys or even getting stuck in the middle of nowhere – though those can be real concerns just as they are anywhere. 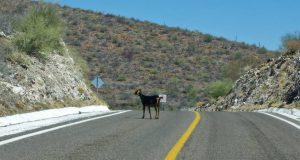 Goats in Mexico don’t care if vehicles are whizzing by. (Image: Kathryn Reed)

What drivers have a hard time avoiding is animals. Sure, there are deer and other wildlife on U.S. roadways that can severely damage a vehicle or worse, but they seem to almost be in designated areas. The threat in the U.S. isn’t for a 1,000-mile stretch like it is in Baja. Cows are the biggest problem in Baja. Goats, too, are a hindrance. A year ago friends struck a horse in Baja California Sur. It wasn’t even dark.

Driving to Cabo San Lucas from Todos Santos earlier this year I had to abruptly go from 65 mph to zero. Goats. A whole tribe was crossing the road, stopping traffic in both directions.

When I drove back to the U.S. this summer it was goats that had me stopping in the middle of the highway. I slowed down for the cows that sauntered along the edge of the road. I wanted to be ready in case they thought there was something more interesting on the other side of the road.

A big difference between hitting wildlife and livestock is that someone owns the latter. That animal suddenly has a value. It’s going to take insurance companies, maybe lawyers, to figure out who is at fault. The driver for hitting the animal? The owner for letting it roam? Another reason to keep my Mexico car insurance up-to-date.

Having experienced animals on the road in the daylight in Mexico and knowing it meant a quick stop, it’s easy to imagine how at night it could have ended in a collision. I’m going to keep driving when the sun is up and avoid nighttime travel.