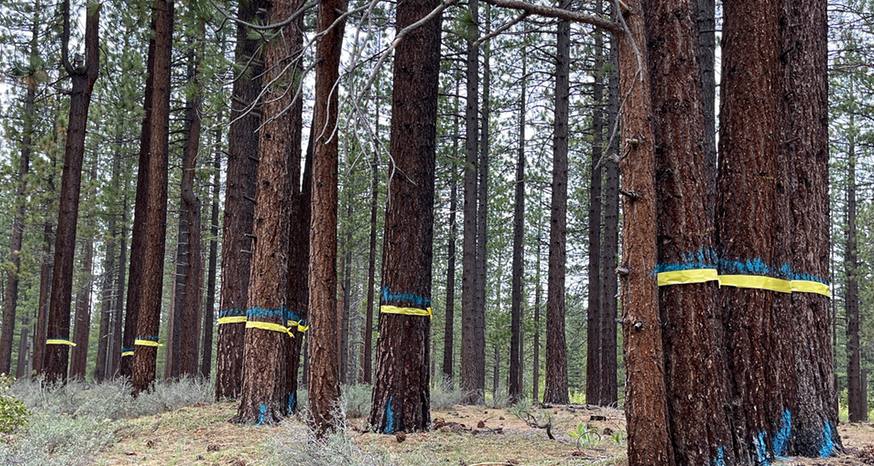 Showing support for Ukraine on the South Shore of Lake Tahoe in May. (Image: Kathryn Reed)

Yellow ribbons tied around trees have been part of folklore in the United States for decades—even long before the hit single Tie a Yellow Ribbon Round the Ole Oak Tree was released in 1973.

The ribbon has come to symbolize the longing return of someone who has gone off to war, an extended voyage, as well as a beacon for those who have vanished.

Last month someone with a bit of a creative gene tied yellow ribbons around a stand of trees on both sides of Pioneer Trail near the city limits of South Lake Tahoe. The message was more than an ordinary yellow ribbon.

Above each ribbon is a painted blue band signifying the tree is slated for removal. Together they represent the colors of Ukraine.

It brought a smile to my face as I drove through this part of the forest. A smile because of the time someone spent to do this. It was also a bit jarring. It’s easy to go about my day and not think about the war going on in Europe. And certainly it was a sad reminder of the atrocities that are going on in the world.

I’m hoping the impermanence of the trees, the paint and ribbons will mean the war, too, will come to an end with the aggressors having lost and returning to their homes so the Ukrainians can rebuild, re-establish some normalcy, and live their lives unencumbered by the bully next door.