Diablo winds a threat to much of Northern California

Considering I essentially grew up at the foot of Mount Diablo, one would think I would have heard of the Diablo winds. Nope. It wasn’t until the last couple of years that this phrase has come into my knowledge base.

“Mount Diablo is an actual mountain peak with an elevation of 3,848 feet. This mountain is notorious for strong winds. Typically, when the winds are flowing from east to west out of the Sierra Nevada Mountains to the east, they sink as they move into the lower elevation areas of the Sacramento Valley then move up and over the Diablo range,” AccuWeather senior meteorologist Dan Kottlowski said. “This wind flow is created the same way Santa Ana winds form. Surface pressure in the Great Basin builds much higher than the surface pressure in the San Francisco Bay Area. This pressure difference causes the strong easterly downsloping winds into the Sacramento Valley and up and over the Diablo range.” 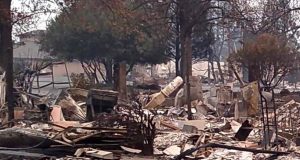 The term Diablo winds came about after the horrific October 1991 firestorm in the Oakland Hills. Twenty-five people died, 150 were injured, 2,843 single-family homes were leveled as were 437 multi-family units, along with 1,520 acres being charred.

It is in the fall, as well as the spring, that these winds are most prominent. They affect most of the San Francisco Bay Area and reach into other parts of Northern California, including Chico. They are similar to the more widely known Santa Ana winds in Southern California.

These are no ordinary winds. They blow strong, with the ability to have hurricane strength. They also increase the air temperature. Often they are accompanied by low humidity. At their worst they fuel fires and destruction.

The National Weather Service linked these fires to Diablo winds:

It seems appropriate they are called Diablo wind, with diablo meaning devil in Spanish.