Femicide no longer a hidden nightmare among Mexican women 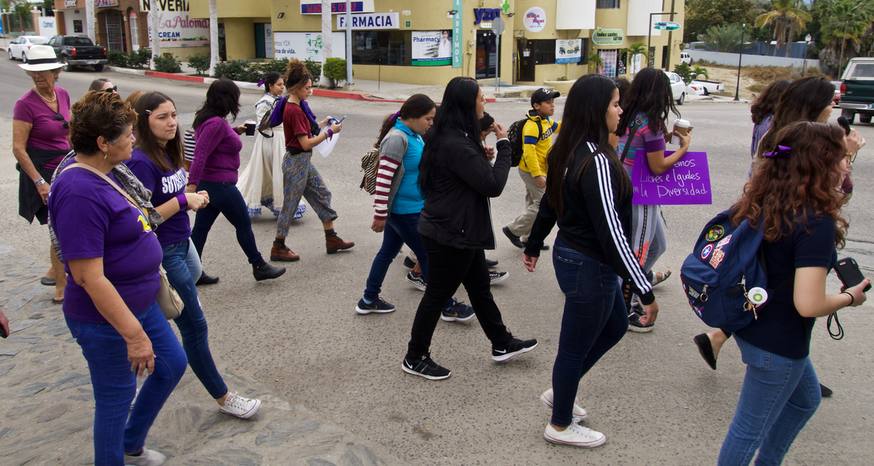 Women in Todos Santos take to the streets on March 9. (Image: Kathryn Reed)

Women in Mexico not only marched, they boycotted work to make International Women’s Day (March 8) a two-day event. In Todos Santos on March 9, they marched and essentially went on a one-day strike.

While it’s not known how many local women didn’t go to work, about 60 people marched Monday morning from the town square to the park. A couple men joined in as did gringas, but mostly it was Mexican women showing solidarity. A few carried signs about the power of women. Purple was the dominant color of choice; as it represents the color for women seeking gender equality.

At the park were various booths. At one, the questions (all written in Spanish) asked women: Have you judged or spoken ill of other women because of how they dressed? Have you ever been bullied?

Another station allowed women to write something personal, to share a story – one that related to anything they wanted, but tended to have the #MeToo movement in mind.

One table was set up as a place to receive a safe hug. 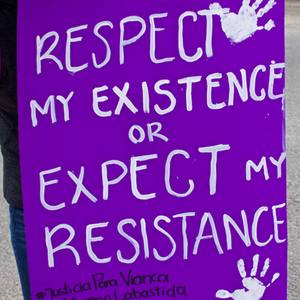 One of the only signs in English at the Todos Santos women’s event on March 9. (Image: Kathryn Reed)

The point of March 9 being a day to boycott work and for others – especially women – not to be consumers was to show what it would be like if women were not here. Who would be there to do so many jobs? Who would be there to buy the goods? After all, there are 21 million registered female workers in Mexico.

The Washington Post reported, “After several recent grisly killings, feminists proposed the action to draw attention to Mexico’s stunning levels of attacks on women, and the idea quickly went viral. Federal and local government offices and dozens of universities are granting leave to female employees and students, and some of Mexico’s biggest companies are also backing the action. Walmart has said its 108,000 female employees in Mexico are free to join the one-day strike. Other corporate supporters include Ford, the Grupo Salinas banking and media conglomerate, and Bimbo, the baked-goods giant.”

While plenty of businesses in Todos Santos were open on March 9, the popular restaurant La Esquina chose to be closed. On its Instragram page the notice said they were doing so “in support of ‘a day without us,’ the national movement to stand up against violence toward women in Mexico.” Landis Restaurant on Instagram posted, “Today we don’t want to be brave, we demand to be free. We stand for those who are not today. We demand a change for all! We demand to remove prejudices and stereotypes. We want freedom! We want respect!”

Mexico can be a dangerous place for women. The government reports more than 3,800 women were killed in 2019, which means more than 10 women were killed every day last year. Reports are that one-quarter of the female homicide victims in Mexico died in their home. Violence is becoming the norm, with nearly two-thirds of women 15 and older having been a victim.