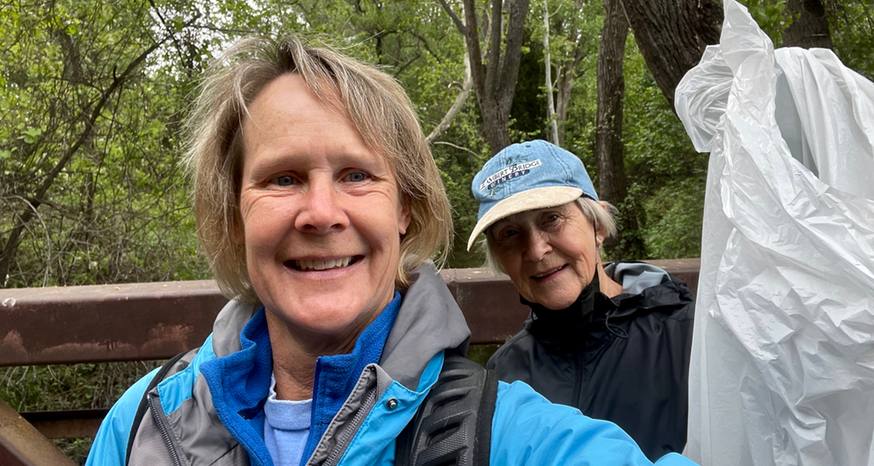 Kae and Cleo with a bag full of trash collected near Little Chico Creek on April 24. (Image: Kathryn Reed)

How did a half dozen plastic hangers end up on a paved bike trail? Were these the remains of a shoplifting incident? Were they going to be used for an art project and fell out of a bag? I’m still curious.

They wound up in a garbage bag with lots of other debris collected along the two-mile Little Chico Creek Bike Path. 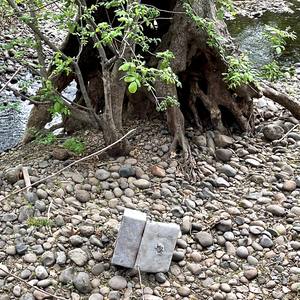 A chair still needs to be disposed of properly. (Image: Kathryn Reed)

Mom and I spent the morning of April 24 scouring this area of Chico for litter. This was the first time the city sponsored the event. We were two of more than 400 people who signed up to help. Locations throughout town had people out in force on the blustery day.

We opted for something close to our neighborhood. The bonus was being on a trail neither of us had been on and logging almost 4 miles. It wasn’t until we were more than halfway up the trail that we finally saw two others doing the same thing—making Chico a little bit cleaner. They had “team leader” shirts on. 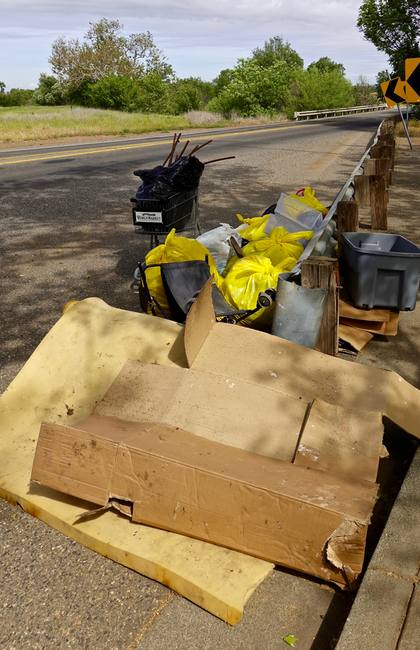 Some of the trash volunteers found in Chico. (Image: Kathryn Reed)

We learned from them the bulk of the volunteers were in the Chapman neighborhood. These two—appeared to be a dad and son—were actually in the creek where they found a bollard that maybe belonged to the city and maybe at one time had a function on the bike trail. A little downstream they could see a ratty chalkboard they wanted to haul out.

I told the “leader” there were more things in the creek if they chose to stay in and along the water’s edge. 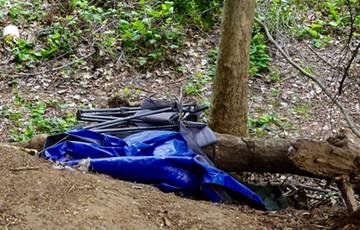 A tarp and chair over the edge of the trail could have belonged to a homeless person. (Image: Kathryn Reed)

Unfortunately, mom and I could not collect all the waste we saw. Either it was too heavy (a chair) or too hard to get to (a sock on a branch extended over the water’s edge). Then there were some suspicious baggies filled with a maroonish colored liquid, a cardboard box and some other unknowns. We just walked on by.

We stayed away from the tarps; remnants of the homeless. Who knows what may have been under them. We weren’t in a position to haul out big stuff. 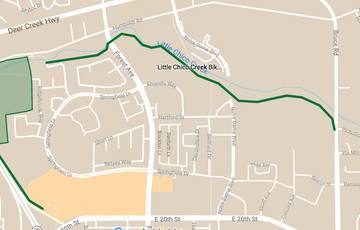 The dark green in the middle is the trail Kae and Cleo cleaned. (Image: Google Maps)

At cleanup days in other towns there had always been people at the starting location. Not true with the Chico event. That was a little disconcerting. But we persevered—going up and down the path with gloves on and our bags. We filled a kitchen size trash bag on the first leg, and about a third of one coming back. That just proves you don’t see everything the first go-round and that some things can only be seen from one direction.

The other nice thing about having an official person to check in/check out with is to tell them where the junk is that you didn’t get. That didn’t happen with this cleanup day.

I’ve also been at cleanup days where you write down everything collected. Not this time. Mostly, though, it was food wrappers we found. What is being called pandemic trash—masks, wipes—were also on the ground. Scrap metal, glass, cigarette butts, clothes—they all ended up being properly disposed of.