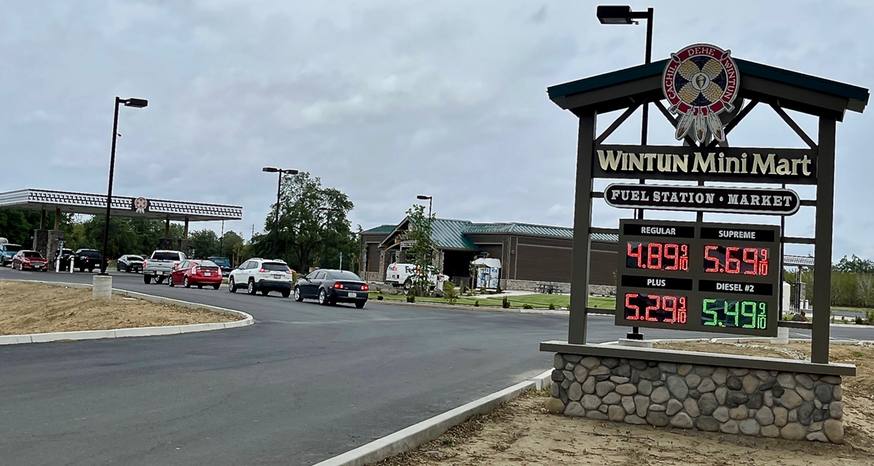 I’ve become a semi-regular at Indian casinos of late. But I never go in. I always stay outside.

That’s because this is where the gas pumps are.

RV’ing friends enlightened me that Indian casinos are the go-to place to get the cheapest gas. Even cheaper than Costco, which is usually my go-to.

Tribal gas stations are able to offer fuel for less because they usually don’t have to pay federal and state taxes.

At the Wintun Mini Mart, part of the Colusa Casino Resort, prices on April 14 were:

I have not seen low grade gas for less than $5 a gallon for a while now except at these tribal locations.

It takes some searching for these stations. They aren’t always obvious, which seems ridiculous. This one in Colusa doesn’t have much signage from the street. I happened to pull in one day to see if they had pumps, and sure enough they do on the north side.

I’ve also filled up in Middletown in Lake County.

The nearest to me is in Oroville, where mom and I filled her tank one day. But it’s not like I would drive there to do so. After all, driving all over for the cheapest gallon of gas can be self-defeating. But when convenient, I fill up or top off my tank at tribal stations.

California has some of the highest gas prices in the country, which in part has to do with the taxes.

CalMatters reports, “California taxes gas before it gets sold and uses the money to fund highway improvements and transit projects. Right now that tax—paid by suppliers—is about 51 cents per gallon, which makes it the second highest in the nation, after Pennsylvania’s tax.”

The state Legislative Analyst’s Office, a nonpartisan policy and fiscal advisor to the state Legislature, broke down the gas taxes the following way. If a gallon of gasoline costs $4.64, taxes make up about 20 percent of that price, with more than half being the state excise tax (51.1 cents). The federal excise tax is 18.4 cents per gallon.

The state tax is recalibrated every July based on inflation, not so for the federal tax. Expect a 3 cent hike in California taxes this summer.

Also in that gallon of gas are state and local sales taxes, which together average about 3.7 percent.

“Sales taxes are set as a percent of the price of gasoline. Unlike excise taxes, drivers are charged these taxes directly at the pump, although gasoline stations include the tax in the prices they advertise. The current average state and local sales tax rate on gasoline is 3.7 percent, though the rate can vary from as low as 2.25 percent to as high as 5.75 percent depending on the locality,” according to the LAO.

While it could be detrimental to our roads to always fill up at Indian gas stations, it will likely be better for your wallet. Here is a link to tribal gas stations in California.