A life without friends, would be a life that would not be worth living. That’s how strongly I feel about friendship.

Solving the world’s problems, solving each other’s. Dreams – big and small. Laughter, tears, listening. It’s all part of the equation. So are harsh words, anger, pissiness and exasperation.

Being a friend isn’t all about niceties. It’s about honesty – at least for me. It’s having to hear what you don’t want to, but what you need to. It’s also about calling someone on their bullshit. It’s about give and take; and making sure there is a balance to those. 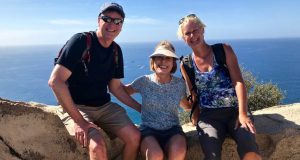 It’s being empathetic and sympathetic.

It’s not that all of this can’t be found with a family member. It often is in varying degrees depending on the relationship. What I’ve found, though, is with family there is a hierarchy that is hard to overcome. That imbalance can make it difficult for true friendship.

There is something so incredible about friendships. They are the chosen ones. Me them, them me. That’s pretty damn special.

I have friends all over the world. Some I engage with regularly, some occasionally, some once a year. It’s in person, by phone, email, text. We talk for hours or a few minutes, send lengthy correspondence or a sentence or two. A photo or emoji might suffice. Sometimes it’s via social media that we interact.

Like all relationships, a friendship should not be taken for granted. It needs tending to in order to remain healthy, to thrive, to be alive.

Earlier this month I was able to spend several hours with my friends Kim and Dan. I’ve known her since elementary school, him since college. I was a bridesmaid in their wedding 31 years ago. We only see each other every few years even though when I was in Tahoe they were less than four hours away. The closeness, though, remains. We know how all of our moms and siblings are doing. We know we’ll always be there for each other. It’s reassuring.

Later this week my friend Darla arrives for a few days. We grew up living next door to each other after my family moved to the San Francisco Bay Area when I was in third grade. Oh, the stories we know about each other. I can’t wait to make more memories.

My friend Denise sent me off to Baja with a stack of cards, each with a date signifying when to open it. They were such an incredible lifeline not just back to her, but back to Tahoe and all that was familiar. I needed those cards at a time when I knew no one here, before I had anyone to call friend. I had repeatedly told her how much they meant to me; down came another stack in December with a mutual friend.

The last one was for Easter – today. Her personal inscription reads, “Wishing you a happy springtime. Here’s to renewal and flowers blooming.”

Simple, yet poignant. Almost clairvoyant in writing this more than four months ago to know it was what I needed to read today.

Denise is also the friend who hosted one of my going away parties when I left California at the end of last summer. Another friend suggested everyone say something about me, how we met, etc. Something similar was done at my 50th birthday celebration, with people saying nice things about me.

In all the sharing we do with friends, telling them what they really mean to us is often left out. I was humbled by what people had to say. I smiled and had tears in my eyes. Oddly, it’s like having had a living wake without having been diagnosed with a terminal illness.

It made me reflect on when my friend Joy was dying. She planned a party where all her friends would show up so she would have one final goodbye. Unfortunately, she died before the party. That day became her celebration of life. She would have loved to have been there. It made me tuck in the back of my head that if I ever know I’m going to die, I want a party before the final day so I can be with my friends one last time. (Hoping this is years from now.)

While that all may sound morbid, I simply want to be surrounded by friends – in the good times and the bad times; mine and theirs; now and in the future. Thank you to all my friends – near and far, you mean the world to me.