Because people will never be able to control Mother Nature there will always be deadly avalanches.

One of the most memorable ones in California was on March 31, 1982, at Alpine Meadows ski resort. Seven people died that day when the snow came tumbling down the mountain. It could have been worse. The Tahoe area resort was closed because of potential danger so not many people were there. 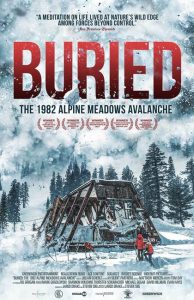 The story of that fateful day, and the ensuing rescue and recovery are the subject of a movie that came out this fall. It opened in Bay Area theaters in September, but just this week became available on Amazon and Apple TV.

Buried: The 1982 Alpine Meadows Avalanche is a documentary worth watching even if you think you know all you want to know about that deadly day. This feels like such a complete, truthful telling of what happened 40 years ago.

Filmmakers Jared Drake and Steven Siig both live in Lake Tahoe. I’m sure this helped make the film so authentic.

Plus, Siig is personally familiar with avalanches because of living in the Alpine Meadows’ avalanche zone. This 2017 story by his wife, Melissa, relives one of their encounters.

The movie is as much about avalanches as it is the ski patrollers who were tasked with keeping the resort safe to ride. Interviews with several of the people who were there that day is what makes the film so intriguing.

While I knew the outcome, the movie kept my attention all 96 minutes of it.