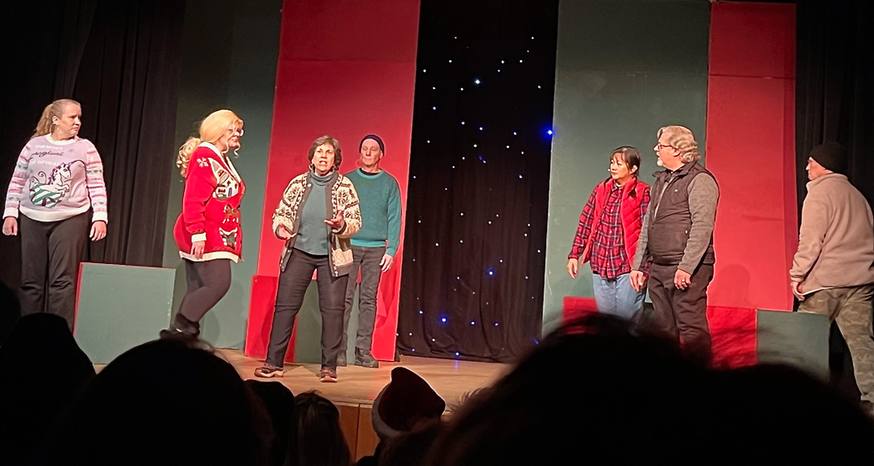 The cast of “Guilty Christmas” entertains at the Valhalla Boathouse Theater through Nov. 20. (Image: Kathryn Reed)

Be ready to laugh, shake your head and have an evening of fun at “Guilty Pleasures,” the self-deprecating musical comedy about most things Tahoe related.

If this play sounds familiar, then you probably saw the original “Guilty Pleasures” when it first came to the stage at the Boathouse Theater at Valhalla in 2002. That play had multiple iterations through the years.

Then director Dave Hamilton and music director Mark Williams got the idea for a Christmas version of this irreverent show. Covid and snowstorms prevented it from being staged the last two years.

It opened Nov. 15 to a nearly sold-out audience. Get your tickets now as the show runs through Nov. 20.

One of my favorite scenes in the two-act play was “The 12 Days of Quarantine” that was sung to “The Twelve Days of Christmas.” It would be hard to find someone who could not relate to most of the lyrics. This definitely received the loudest applause.

While that was one of the numbers that was not Tahoe specific, most were.

All those bearded beanie wearing guys of a certain age have been immortalized in “The Guy from South Lake Tahoe”—a parody about what it’s like for a single woman looking for a man in Tahoe.

While the original “Guilty Pleasures” had a driving scene about driving 50 on 50 (as in Highway 50), the holiday show starts off with “Winter Driving” and the hazards of being on the road with tourists.

Another memorable segment was “I Have Seen the Light” which saw Scrooge, who is a greedy developer, reliving Tahoe past to see what he created that is now Tahoe present and what Tahoe future might be.

Vacation rentals were not spared, nor was the South Lake Tahoe City Council or TRPA.

One would not have to be a local (or former local as the case may be) to understand all the references, but it sure helps. An out-of-towner isn’t going to appreciate the reference to the Jamie Orr-ification of South Lake Tahoe.

If you want a night of frivolity that will have you laughing, applauding and making you appreciate South Lake Tahoe despite all of its imperfections, then go see “Guilty Christmas.”