A better life. It’s that simple. That’s why people are willing to leave their home and family, walk thousands of miles, risk being killed and raped, and possibly end up spending all the money they have to get to their destination – the United States.

These migrants are often threatened with persecution in their home country, countries frequently governed by dictators. It could be they are on the opposite side of the ruling party, maybe practice the “wrong” religion, or love the “wrong” person. Or maybe it was past policies of the United States that caught them in the crosshairs of their government.

“Some ugly myths have taken root in the United States that these same people are predisposed to be criminals, a dormant threat to national security and gathering drag on our economy. In a country built by migrants, currents of nativism and xenophobia are on the rise, with bluster of walls going up and mass deportations,” writes Jason Motlagh in Outside magazine. “And somehow people of all stripes keep angling for our faraway borders with their dreams intact, risks and distances be damned.”

Outside magazine on July 19, 2016, published Motlagh’s story about his time in the Darién Gap, the people he met, and the struggles of those who were passing through and those who call this area home.  The following September, Australian newsmagazine “Dateline” broadcast the story. It was SBS News that funded most of the trip. Motlagh was joined by videographer Roger Arnold and photographer Carlos Villalon. 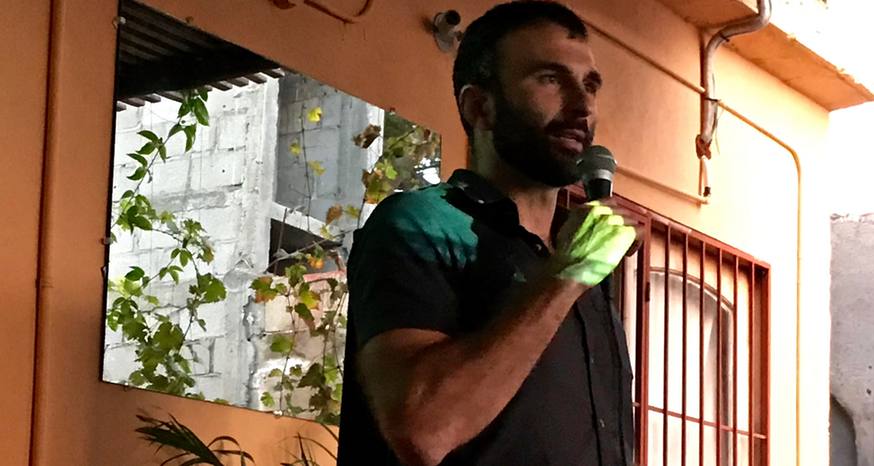 On Dec. 28, 2018, Motlagh shared his experience with more than 70 people who gathered at Mi Pueblito restaurant in Todos Santos, Baja California Sur, in what was the launch of the fourth season of the speaker series. Motlagh moved here in September 2017 from Oakland, Calif.

This journalist who has chronicled the story of immigration from a multitude of countries, started the evening by outlining how the film/writing project originated, and then added a bit of personal history about how his father arrived in the United States from Iran. The hour-long film saw the audience members shaking their heads in disbelief and disgust.

The much longer magazine story delves into the experience in more depth.

“If migration is the story of our time, then the Darién Gap is its crucible,” Motlagh said.

The Darién Gap separates Colombia and Panama. It is the lone section of the Pan-American Highway that runs from Alaska to the tip of South America that is not paved. Its lawlessness is a haven for drug runners and human traffickers. Then there are natural elements that are deadly – snakes and other animals, in addition to disease. The remoteness all but ensures proper medical care won’t happen.

A combination of trekking on land and motoring by boat enable people to cross this rugged landscape. Conditions are harsh. Food scarce. Sleeping is outdoors among all the nocturnal creatures. The route doesn’t come with trail markers. Well, there are some – there’s the human skull, the discarded clothing and other personal items of those who went before.

The riskiest part isn’t necessarily putting ones trust in the smugglers and the natural hazards. It could be avoiding the Marxist rebels known as FARC (Revolutionary Armed Forces of America) who control this 50-mile corridor on the Columbian side.

A bit of irony is that being so remote and relatively undeveloped, the Darién Gap is also an environmental mecca of sorts. The Panamanians have created a national park on their side to preserve the ecology.

The 20 migrants Motlagh traveled with were from Southeast Asia and Africa. Flying into Ecuador or another country where there are no visa requirements often is the starting point for the arduous trek north.

Often lost in the anger on social media is where these people who are trying to cross the U.S.-Mexico border originated. It’s not just Mexico and Central America.

A lone woman was among the group the journalist followed. She was from Cameroon. Motlagh shared that she made it to her destination only to be denied asylum and then sent back to where she came from.

Motlagh doesn’t know what happened to all of those he traveled with. Some emails were never returned.

Here are a few other stories on immigration that are worth reading: