Homeless in Tahoe slowly moving from woods to hotels 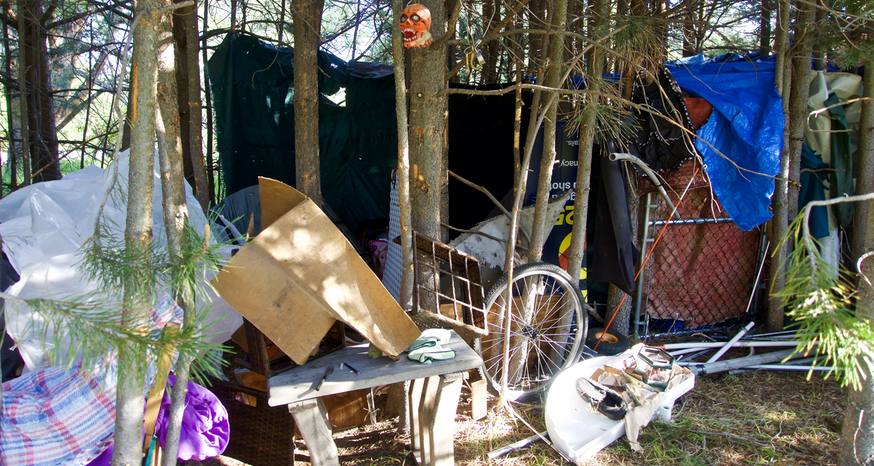 Efforts are under way in South Lake Tahoe to get people out of the wood and into more stable housing. (Image: Kathryn Reed)

Homelessness is becoming less of a problem in South Lake Tahoe—sort of. A concerted effort is under way to get those living in the woods to be housed in hotels as a transition before paying their own rent for a more traditional apartment or the like.

This fall Police Chief David Stevenson launched STACS, or South Tahoe Alternative Collaborative Services. The main players are the police department, Tahoe Coalition for the Homeless, and El Dorado County’s Behavioral Health Department. Barton Health will also have a significant role. In October, Stevenson gave a presentation to the City Council about the initiative.

STACS came out of a grand jury report that said countywide there needed to be an improvement between law enforcement and the county’s behavioral health services. In April, the chief put together a homeless outreach team when the school resource officers were not needed at the campuses because of the pandemic. (With school resuming onsite, the officers have returned to their regular jobs.) Even so, a different cop has been named the homeless outreach officer; a position the department has never had before.

“I started looking around and found out that we have a lot of the pieces and all these players. We were all doing our own thing in a vacuum. I thought we could do better and do so with a more collaborative approach,” Stevenson said.

His first call was to Cheyenne Purrington, executive director of the Tahoe Coalition for the Homeless. She started working at the 5-year-old South Lake Tahoe nonprofit in January. The STACS working group started meeting last month.

“The goal is to get people stabilized and housed,” Stevenson said. “The selfish goal for the police department is to reduce the number of people in crisis.” This in turn means reducing the number of violent encounters. “The power of the group is that we get that person what they need to maintain their stability.” This is done with follow up visits with the person when he or she is not in crisis.

Stevenson looked at other programs in the area and country to see what is working to come up with STACS. Because there is some overlap in who the police deal with and who the homeless coalition sees, they are natural partners. The coalition has a good handle on how many homeless people are in the area, which is way beyond the numbers the police see in their line of work.

The police interact with the homeless if there is suspected criminal activity or if they are trespassing by erecting a camp. A massive camp was broken up early this past summer behind Motel 6. A 40-yard dumpster was filled with the trash that was left behind. Up and down the Upper Truckee River and Trout Creek are common places for the homeless to set up camp. Most camps are an environmental nightmare, a fire threat, and often involve petty crime in nearby neighborhoods—with the theft of propane tanks common.

Part of the every 10-year Census count is a tabulation of the homeless. This took place across the U.S. on Sept. 22-24, including in South Lake Tahoe.

“Counting people outside in transitory locations is just one way we count this population,” Donald Bendz with the U.S. Census Bureau said. “The U.S. Census Bureau works with a number of organizations who provide services to people who are experiencing homelessness. We set up appointments with soup kitchens, shelters and others during our three-day operation. During these appointments we work with the service based organization to enumerate their clients.”

South Lake Tahoe police officers often get calls in the non-snow months about various homeless encampments. In September a couple people were asked to move on. This is the normal procedure—the homeless are told to leave, officers follow-up to make sure they are gone, then any clean up that is required is done.

Stevenson said he knew nothing about the Census count, nor were the people moved in September done so to sway the count. The Tahoe Coalition for the Homeless doesn’t rely on the Census numbers, instead the nonprofit uses the counts taken every other January. The next will be in 2021. In 2019, 110 homeless people were counted in South Lake Tahoe.

El Dorado County also relies on the biennial Point in Time, or PIT, count. “Federal and state funders tend to use the metrics of the PIT count data upon which to base funding to counties and states for implementation of programs to address homelessness,” Margaret Williams, county health program manager, said.

For now, there is plenty of cash to deal with the South Lake Tahoe homeless issue thanks to a nearly $10 million grant from the state as part of Gov. Gavin Newsom’s Project Homekey. TCH is in negotiations to purchase two hotels for the purpose of providing transitional housing for the homeless. The goal is get everyone off the street, so to speak. However, those working on this endeavor acknowledge there will always be a few people who choose the outdoors.

TCH when it first started as an all-volunteer group had a seasonal warming room where the homeless could sleep overnight. The group has evolved to have paid staff working on more permanent solutions. Now about 30 people are housed in a 22-unit hotel in town. Negotiations are under way to secure two more hotels (not in the tourist core) for the homeless, with the hopes those will be available this year. According to Purrington with the TCH, her agency serves about 400 people a year. Not all need shelter, some only use the services that are provided. The current offices are above Christmas Cheer. Computers are available to apply for jobs, check on benefits like Social Security, or contact veterans’ services. The space also has a shower. A private area is set up for telemedicine.

A significant number of TCH clients have income, whether it’s from the government or having a job. The problem is not having enough for rent, let alone first, last and a deposit. Getting people into the hotels will give them a sense of having a home. This will allow for the various social services to be able to easier reach this group of people. Those with the means could then possibly rent an apartment or house with others, splitting the rent and having what would be a real home.

“A homeless person costs a community $35,000 a year,” Purrington said. This is the price of emergency intervention, which includes food, interactions with law enforcement, trips to the emergency room, cleaning up homeless camps, and more. “The cost for supportive housing is about $11,000. It really is an investment.” And in most cases that is state and/or federal money, as is the case with Project Homekey.